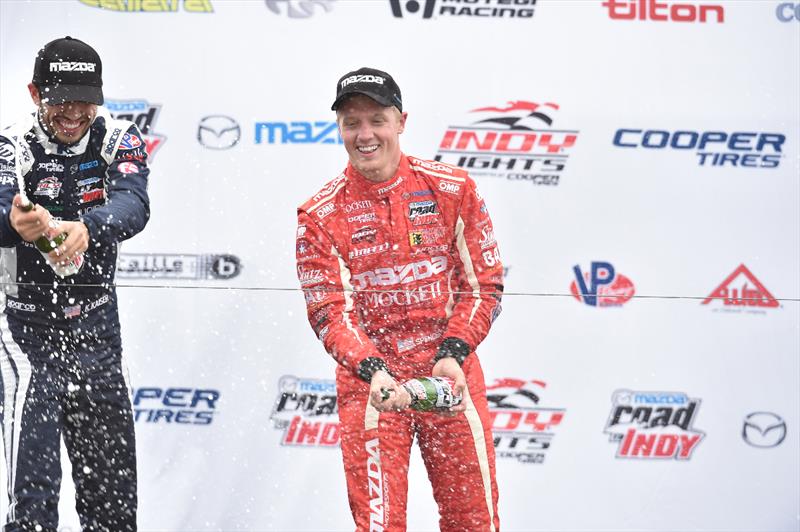 Spencer Pigot and Juncos Racing swept to victory in this afternoon’s Indy Lights Grand Prix Presented by Cooper Tires at Mazda Raceway Laguna Seca. The 21-year-old American took the lead on the first lap and remained in charge throughout the 38-lap contest to claim his series-leading sixth win of the season and, even more importantly, the Indy Lights Presented by Cooper Tires championship title along with the $1 million Mazda Road to Indy scholarship which will guarantee him a ride in three Verizon IndyCar Series events in 2016, including the historic 100th Indianapolis 500.

The Mazda Road to Indy is unparalleled in the world of auto racing, offering scholarships at every level which allow talented drivers to progress all the way from karting through the Cooper Tires USF2000 Championship Powered by Mazda, the Pro Mazda Championship Presented by Cooper Tires and Indy Lights to the Verizon IndyCar Series. With today’s title success Pigot now has won four Mazda Scholarships – the Skip Barber Karting Scholarship in 2009, which allowed him to make the move from karts to the Skip Barber Race Series, another scholarship to progress into USF2000 after winning the BFGoodrich/Skip Barber National crown in 2010 and last year’s Pro Mazda championship, also with the Juncos Racing team.

Pigot started on the outside of the front row for today’s championship decider after regaining the championship lead by virtue of his victory yesterday. He knew a podium finish would be enough to secure the championship. Title rival Jack Harvey, who started directly behind Pigot for Schmidt Peterson Motorsports with Curb-Agajanian, made it three wide as the field accelerated toward the green flag, then over the left-handed crest at Turn One and downhill into the braking area for the Mario Andretti hairpin.

Miraculously, everyone made it through unscathed, although after Chilton, who started on the pole, and Harvey each left their braking a fraction too late, it was Pigot who emerged with the early advantage ahead of Rayhall, who somehow found his way into second from sixth on the grid.

Soon afterward, Harvey was assessed a penalty after being adjudged to have jumped the start. He rejoined at the back of the pack, his title aspirations virtually at an end.

After a pair of early full-course cautions due to Schmidt Peterson teammates Scott Anderson and Ethan Ringel both running into difficulties, Pigot once again took off into the lead with Rayhall in hot pursuit.

Pigot, who also took home the RePlay XD Move of the Race award for his heads-up maneuver at the first corner, displayed admirable consistency as he focused on maintaining his advantage. When Rayhall eased his pace a little in the closing stages, Pigot finally took the checkered flag some 2.0542 seconds to the good.

Shelby Blackstock, who started eighth for Andretti Autosport, took over in fourth following Harvey’s penalty, and held it until the final lap when Ed Jones (Carlin) found a way past. Blackstock had to be content with fifth ahead of RC Enerson (Schmidt Peterson).