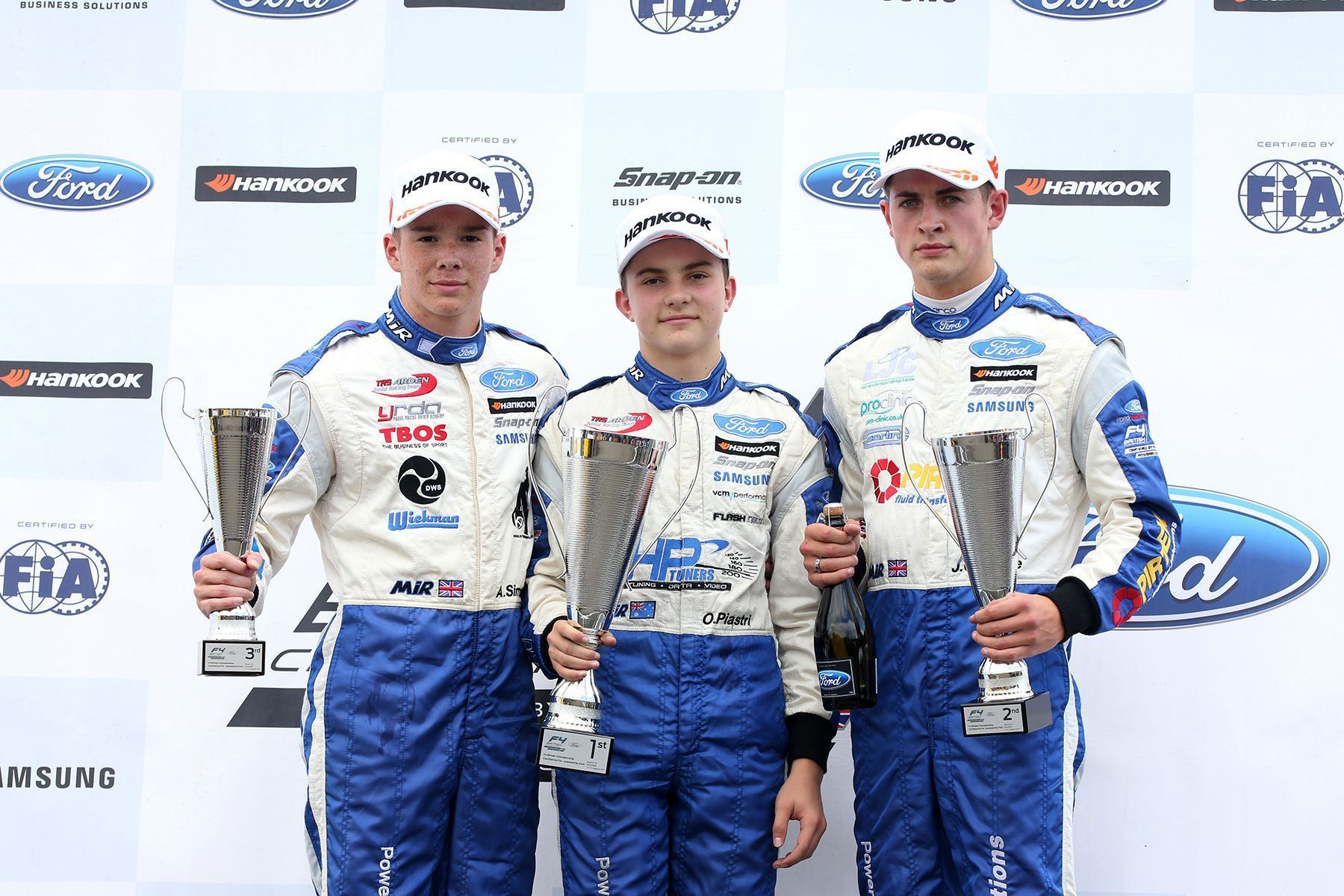 TRS Arden’s Oscar Piastri made it win number four of the season in Round 19 of the F4 British at Knockhill from a hard-charging Jamie Caroline and team-mate Ayrton Simmons.

The Aussie managed to reduce the gap to Caroline in the championship to 39.5 points thanks to another excellent drive under pressure. At first from Quinn and then from Caroline.

Behind them fifth place man on the grid Caroline was determined to make amends for a qualifying that didn’t go his way, dispatching with Simmons on the exit of Butcher’s on the opening lap after the TRS Arden racer dipped a wheel on the grass.

Moments later Caroline had team-mate Logan Sargeant in his sights, passing him on the run up to Hislop’s and into Taylor’s Hairpin with Simmons following suit.

The Pirtek Raicng-backed rising star then homed in on Piastri and Quinn, with Ayrton Simmons in tow.

On lap eight Caroline performed a bold lunge down the inside of Quinn at Taylor’s Hairpin to snatch second place, the move taking Quinn by surprise and opening the door for Simmons to overtake as well.

Further back in the field Lucas Alecco Roy (Carlin) and Jamie Sharp (Sharp Motorsport) were locked in a thrilling duel, only for it to end in tears on lap nine which saw the Safety Car deployed and the race neutralised.

A mistake at Taylor’s Hairpin on the Safety Car restart scuppered Caroline’s chances for the win, despite setting fastest lap in the closing stages, and gave Piastri sufficient breathing room to take the chequered flag by a margin of 0.321s. The latter bringing home the win in stylish fashion having had to manage a wounded car in the final two laps after clattering a kerb.

The Safety Car restart provided Ericsson with the chance to climb up to seventh, passing Hoggard. A seventh place finish was enough to see Ericsson take the Ford F4 Challenge Cup win with Olli Caldwell and Harry Webb completing the podium having finished ninth and 11th respectively.

Seventh place also brought with it the added bonus of pole position for the reverse grid race tomorrow which will see a front row lock out for Fortec Motorsports with Oliver York alongside Ericsson.

Linus Lundqvist was a big mover on the opening lap, climbing two places to pass Hoggard and Sargeant. However, the Double R racer’s hard work was undone by an off track excursion on lap six demoting him from fifth to ninth. The Swede doing well to salvage a position and move up to eighth by the end of the race.

Meanwhile Sam Smelt brought home his maiden point score in the series in only his fourth race after holding on brilliantly to 10th place for GW Motorsport.

The second race of the weekend, the rescheduled Round 12 from Oulton Park earlier in the season, takes place later this afternoon at 1710.