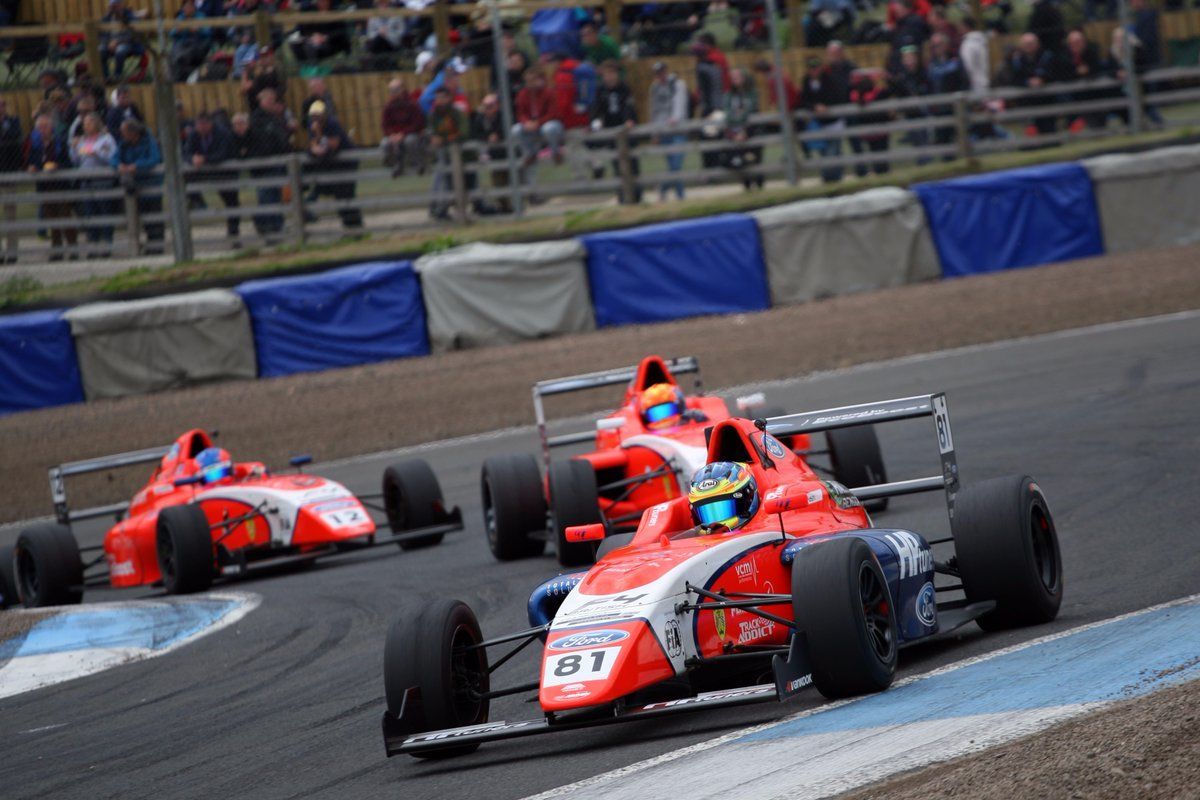 TRS Arden wrapped up the F4 British  weekend at Knockhill in style with an emphatic 1-2-3 finish. Oscar Piastri took his fifth win of the campaign from Alex Quinn and Ayrton Simmons.

Piastri, Quinn and Simmons were untouchable out front trading fastest lap times for the duration. Their respective quickest laps of the race covered by a mere 0.022s.

It was a dominant display from the TRS Arden trio who controlled proceedings from the outset, with Piastri and Quinn getting away brilliantly off the line and Simmons jumping Jamie Caroline to move immediately into third.

From then on the only threat was from Carlin’s Logan Sargeant who Simmons kept at bay, acting as rear gunner for Piastri and Quinn ahead, particularly after a Safety Car period six laps into the race.

Like Simmons, Sargeant capitalised upon team-mate Caroline’s slow start to take fourth and kept the TRS Arden runners under pressure for the duration.

Caroline’s slow start stemmed from a mechanical problem which he was forced to manage for the entire race while fending off Double R Racing’s Linus Lundqvist who had climbed two places on the opening lap.  The duo provided an enthralling battle for spectators, as two of the F4 British Championship’s heavyweights duked it out around the 1.27-mile Fife track lap after lap for fifth place.

Patrik Pasma got in on the act too, bringing home his best result of the weekend and valuable points behind the pair in seventh.

Harry Webb triumphed in the battle for Ford F4 Challenge Cup honours and with it rose to the top of the Class standings for the first time this season. The Richardson Racing ace’s fourth win in the Class propelling him ahead of Oliver York, having trailed him by 14 points heading into the race.

Webb had to work hard for it though, fighting his way from outside the top 10 to eighth and kept Challenge Cup rival Olli Caldwell behind him in an exciting duel. Meanwhile Fortec Motorsports’ Hampus Ericsson followed them home to take the final step on the Class rostrum and complete the top 10.

Ericsson’s Fortec Motorsports team-mates, York and Johnathan Hoggard, endured frustrating races. York suffered a spin early on and later had contact with JHR Developments’ Manuel Sulaiman which put paid to his chances of following up his maiden win with a points haul. Hoggard once again encountered front wing damage on a luckless weekend when his pace in testing and qualifying promised so much.

The contact between York and Sulaiman saw the latter miss out on a hard earned top 10 finish. The Mexican’s car was stranded on the entry to Taylor’s Hairpin, causing the race to be red flagged and with it the chequer with just seconds of the 20 minute race remaining.