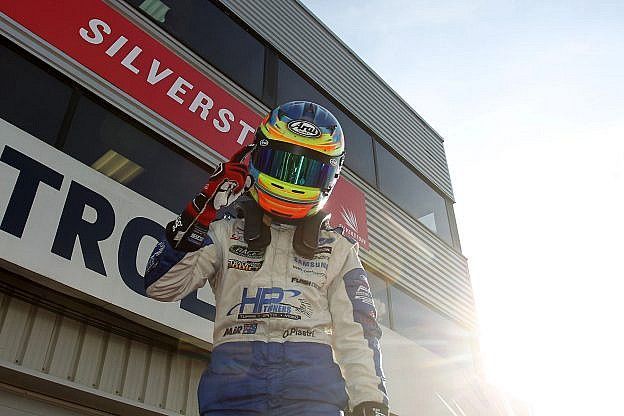 TRS Arden’s Oscar Piastri scored his sixth win of the campaign, ahead of rival Jamie Caroline at Silverstone to take the 2017 F4 British Championship certified by FIA – powered by Ford EcoBoost title fight to the season finale at Brands Hatch in a fortnight.

From pole position Piastri was a man on a mission, determined to score maximum points and finish ahead of Caroline to keep his championship bid alive.

A flawless getaway saw him unchallenged into turn one, while Caroline ran around the outside of Alex Quinn and Hampus Ericsson in a similar fashion to his exquisite first corner heroics in the day’s earlier race.

It left the top two in the championship to battle it out at the front, but Piastri had the edge. He built and managed a gap back to Caroline to secure a comfortable victory, setting fastest lap on the way to the chequered flag.

There was no shortage of drama at the start. Alex Quinn got the jump on front row starter Hampus Ericsson, but the Swede made contact with the rear of Quinn’s car, spectacularly propelling the front of Ericsson’s racer up the air. Ericsson clattered the tarmac with a thud, but remarkably was able to continue.

Despite finishing last and four laps down the Fortec Motorsports racer took third in the Ford F4 Challenge Cup. It crucially puts him to the top of the Class standings, tied with Harry Webb on 315.5 points, but ahead courtesy of his eight Class victories.

Quinn eventually succumbed to damage half way through proceedings, but not before dicing with team-mate Ayrton Simmons which provided Patrik Pasma with the chance to bravely run around the outside of the pair of them.

After the opening exchanges Logan Sargeant found himself in third, but under pressure from Johnathan Hoggard, the duo battling wheel-to-wheel, lap after lap. Their squabble allowed Pasma and Oliver York to make it a four-way scrap for the final podium spot.

With Hoggard seeing Pasma and York advancing in his mirrors, the rookie made a brilliant move on Sargeant. Team-mate York followed suit, getting the run on Pasma and hanging around the outside of Sargeant to take fourth.

York then set about passing Hoggard in a captivating intra-team battle. The former eventually overcoming Hoggard’s resolute defence on lap 18 by running around the outside of him into Brooklands to earn himself the inside line for Luffield.

Losing momentum, Hoggard found himself under attack from Pasma. Contact resulted, but Hoggard was able to keep going and York was forced into the pits with a technical gremlin, promoting his team-mate back up to third.

Double R Raicng’s Linus Lundqvist put on a thrilling performance for the millions of viewers watching on television with ITV4’s live camera fitted to his car. The super Swede came from the back of the grid to finish an incredible fifth, passing team-mate Karl Massaad in the process. The latter ending up seventh behind Simmons.

Olli Caldwell broke Ericsson’s run of five consecutive Ford F4 Challenge Cup wins by finishing eighth overall after climbing several places. It was a welcome return to the top step for the TRS Arden driver, having last tasted victory at Snetterton in July.

Sam Smelt delivered on his Friday practice promise by finishing in the top 10 for GW Motorsport, scoring points after a brilliant drive up the order from 16th.

Meanwhile Manuel Sulaiman doubled his tally for the weekend with another point score for JHR Developments. He denied Falcon Motorsport’s Lucca Allen his first point in British F4 by 0.053s on a weekend where the Irish rookie has shown a significant step forward in terms of pace.

Attention now turns to the season finale at Brands Hatch GP in a fortnight (30 September/1 October). Caroline will arrive with a 67.5 point lead in the standings and will only need a sixth place finish in Round 28 to be crowned FIA British Formula 4 Champion. Meanwhile his Carlin squad can take the Teams’ Cup in the same race if TRS Arden fail to reduce their 103 point lead in the standings by 17 points.