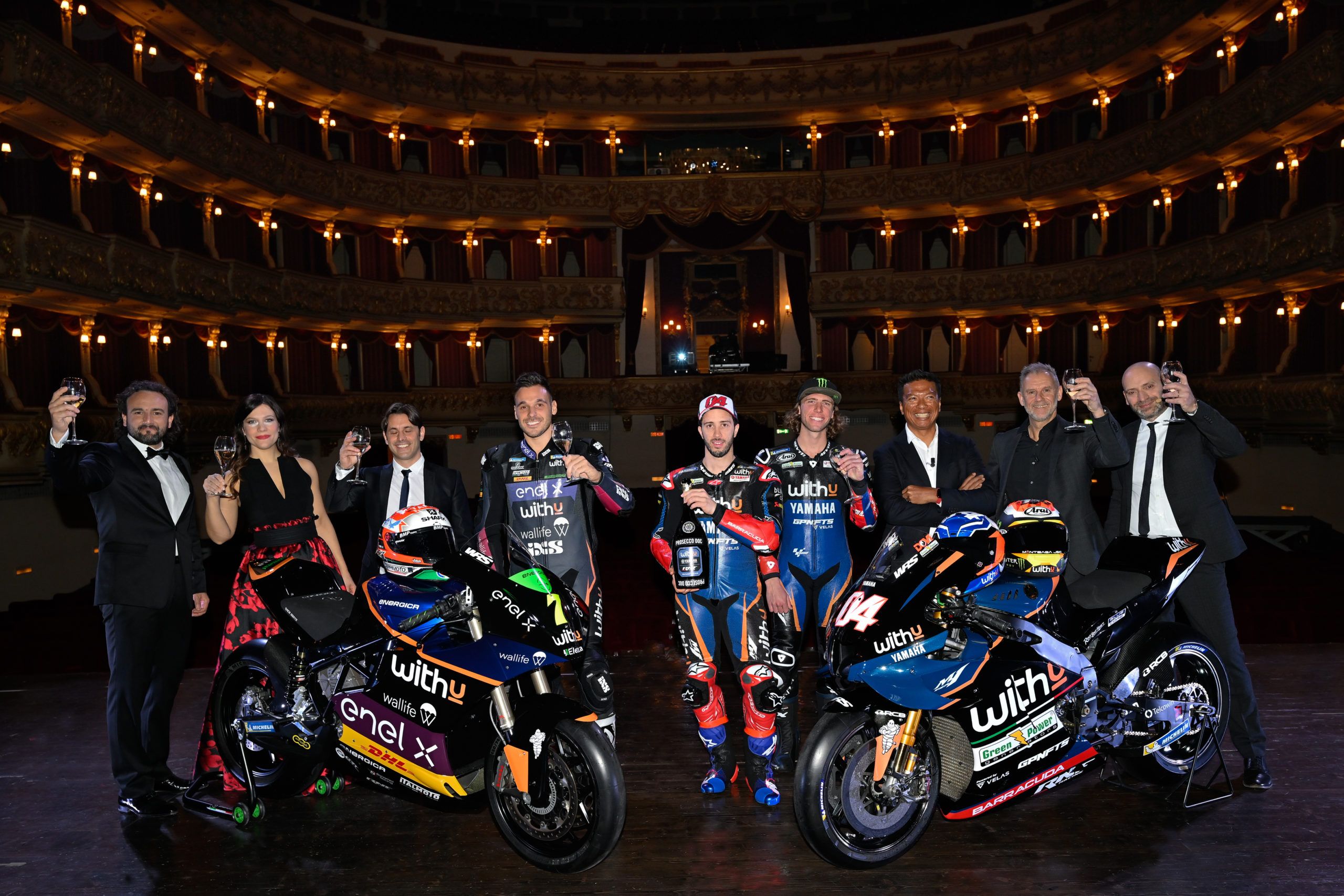 After Petronas Sepang Racing bid goodbye to MotoGP at the end of the 2021 season, Rzalan Razali took over the helm of the outfit and renamed it as ‘Yamaha Team RNF Racing’ with WithU joining as principal sponsor from the 2022 season onward.

The MotoGP team unveiled its 2022 livery in a private event held in Verona in Italy inside a theater amid live artist. The colours resembles the dark blue of the factory Yamaha with the inclusion of black, fluorescent orange and purple – same as on the race suits too.

Andrea Dovizioso is to make his MotoGP return full-time abode a Yamaha M1 alongside rookie Darryn Binder, who moves up straight to the premier class from Moto3. The MotoE bike was also unveiled with Niccolo Canepa also present for the event.

“This presentation in this beautiful backdrop settings of Verona signifies a number of things for the team; firstly, we are rebuilding, rebranding and with the riders, that we have engaged for this year, Andrea Dovizioso and Darryn Binder, the target is to become competitive, surprise everybody and do the best we can in achieving our goals,” said Razali.

“Secondly, for the first time, WithU is the title partner for a MotoGP team. WithU has been with us since 2019 and we appreciate their continued commitment, Matteo Ballarin’s support, trust and confidence in us in this new journey for the next three years. It’s just incredibly fitting for this launch to be held in his home town and beautiful city of Verona in this magnificent Philharmonic Theatre.

“For me, this is a new experience and also for the team. We appreciate the setting a lot! These for me are the two main things that are important for this unique team presentation, where we also have the pleasure to announce our MotoE line-up with Bradley Smith and Niccolo Canepa and are able at the same time to unveil our FIM Enel MotoE World Cup colours.”

Meanwhile, Wilco Zeelenberg, Team Manager WithU Yamaha RNF MotoGP Racing Team, stated: “I’m very excited to start the 2022 season with a new chapter for the whole group. We closed the old one, but closing chapters always means opening new episodes and to start this new project with the RNF team is of course again a huge challenge. A big part of the group remained, some people of the crew, especially on the side of Darryn, are also new.

“We’ve got a new crew chief, a new data engineer and new mechanics. We have new material, a new hospitality, new trailers, so we will replace a lot, but at the same time, a lot will remain. We’ve got two new riders, one experienced rider with Andrea and a rookie with Darryn, which is something we have been doing before, but each season is a new challenge. Yet, we are looking forward to it. The bike looks very nice, although we know it’s not just about the glance. We’ve created a nice balance with colors and we can’t wait to start the 2022 season!”

While Dovizioso noted: “I’m really ready for this season! I’m training a lot in the gym, on my Motocross bike. I removed the plate on my collarbone early December in order to feel better for this year. Everything is going well. I’m so happy to start this full season after five races of testing last year, which was very important to start early with the Yamaha, which is different to what I used the last eight seasons.

“I’m convinced that this will help me a lot to approach the tests and the races in 2022 in a better way. I know more about the bike, about the engineers and the team in general. The new colors are adding to the amazing overall picture and I’m looking forward to the test in Malaysia. The last two years we couldn’t ride there, so I’m really happy to go to Sepang.”

And Binder added: “The colors of my new bike are just beautiful! Once you see the design and how everything is going to look like for the season, it just makes you so excited to get out and actually ride with the new livery and then you know the 2022 season is officially starting once the team launch has happened. I definitely can’t wait!

“It’s going to be so awesome, I’m very, very excited for my first season in MotoGP! Our goal is just to take it step by step. Obviously, it’s a big jump from Moto3 to MotoGP and I only want to take it gradually and build up as high as I can. I don’t want to do anything too crazy, but rather take one step at a time and go up slowly, but surely. I’m really excited, now I can’t wait for the Sepang test to get everything going!” 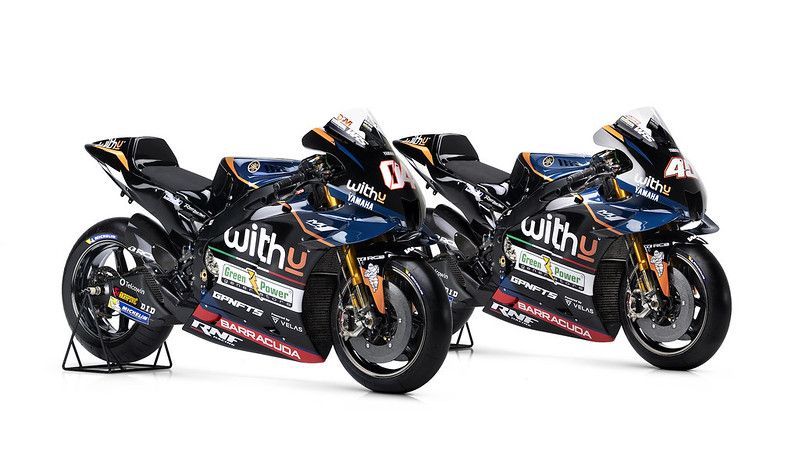 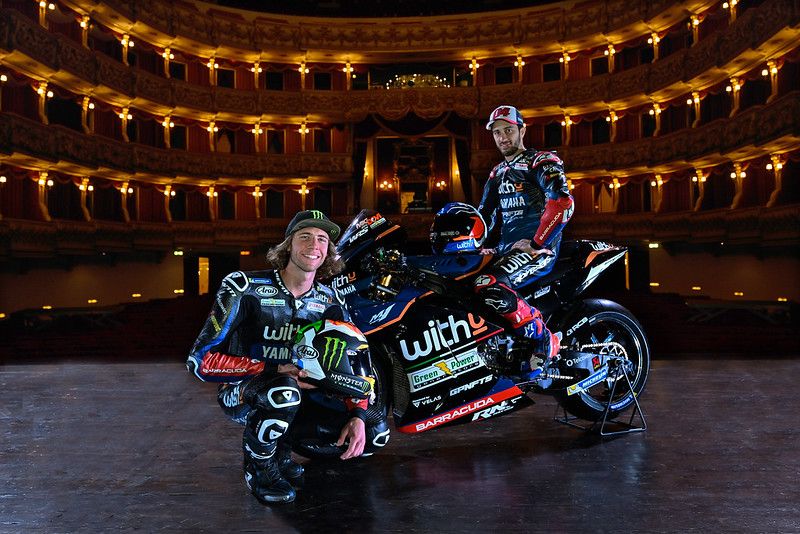