Aston Martin’s 2022 Formula 1 car – the AMR22 – was revealed to the world in all its prized glory on Thursday, ahead of a somewhat early pre-season shakedown day at Silverstone.

Friday saw drivers Sebastian Vettel and Lance Stroll each take to the track in the AMR22 launch-spec car which wowed onlookers in a spectacular display only the night before In all they had 100km on brand new 18-inches show tyres for shakedown.

In a push by the entire team to rack up some considerable running before any of their rivals contemplated the idea, the Silverstone-based outfit gained some valuable running ahead of pre-season testing, seemingly without incident.

Chief Technical Officer Andrew Green explained the reasons for early shakedown and how the need to be reactive with any potential issues with the car is essential as none of the aerodynamic surfaces are carried over from the last generation of cars.

“Really what we wanted to do was shakedown as early as possible to check the systems on the car and give us some time between the shakedown and Barcelona test,” said Green to written media. “So that was the reason for shake down, so we have time to react.

“The car is absolutely brand new, with no carryover at all, and pre-season testing is really short, and the second test is so close to the first race that it’s going to be almost impossible to react to, we thought it’s good to get a shakedown in prior to the first test.

“We give ourselves a gap between the shakedown and the first test to react to,” summed up Green. Aston Martin’s launch car was the actual AMR22, albeit still in its infancy stages of development, very much unlike the vague renders of the Haas VF-22 and Red Bull RB18 which was actually the official F1 show car.

The Aston Martin gives us the truest picture yet of the direction F1 has committed to for 2022 and beyond. Green was asked why the team are showing their hand a lot more readily than Haas and Red Bull, remarking that “we’re an honest bunch, we’re not trying to deceive!

“No, we had a car available,” started Green. “We didn’t want to do a livery launch. We’re beyond doing livery launches this year. We wanted to do the real thing.” When he was subsequently asked on the dangers of revealing the key directions that their design team has gone down with the car, such as the nose and front wing areas and the unexpected sidepod inlet shape, Green reassured that there’d be “different approaches initially”.

“I think there are lots of different ways of approaching the problem with the 2022 regulations,” he said. “And I think initially you’ll see a few variations, some similar to a theme. But I don’t think it’ll be long before we all align, as far as the big visual aspects of the car go,” summed up Green.

McLaren has since unveiled its MCL36, which on the face of it seems to follow the lead of Aston Martin in revealing a true look at a car, but the Woking-based team freely admitted there were areas hidden and components absent from prying eyes. The high front wing from the ground, though, seems will be the theme as seen in the pictures.

Here’s photos from Aston Martin along with videos:

In another news, the FIA released the start times for the 2022 F1 season. It confirmed the practice sessions to be one hour each especially on FP1 and FP2 side. The initial 2022 Sporting Regulations noted of it returning 1.5 hours for this season.

However, the rumbles during the off-season kicked-in about the latest draft – yet to be published – will change to one hour each as in 2021. As for the changes from last year, the timings have changed a lot from last year, especially for FP1 and FP2.

Since the media day has been pushed to Friday morning, it means the start of FP1 has been pushed by few hours with the subsequent change in FP2 times. The qualifying start times has changed too where majority of cases is one hour late start but the race times are largely similar to how it was in 2021. 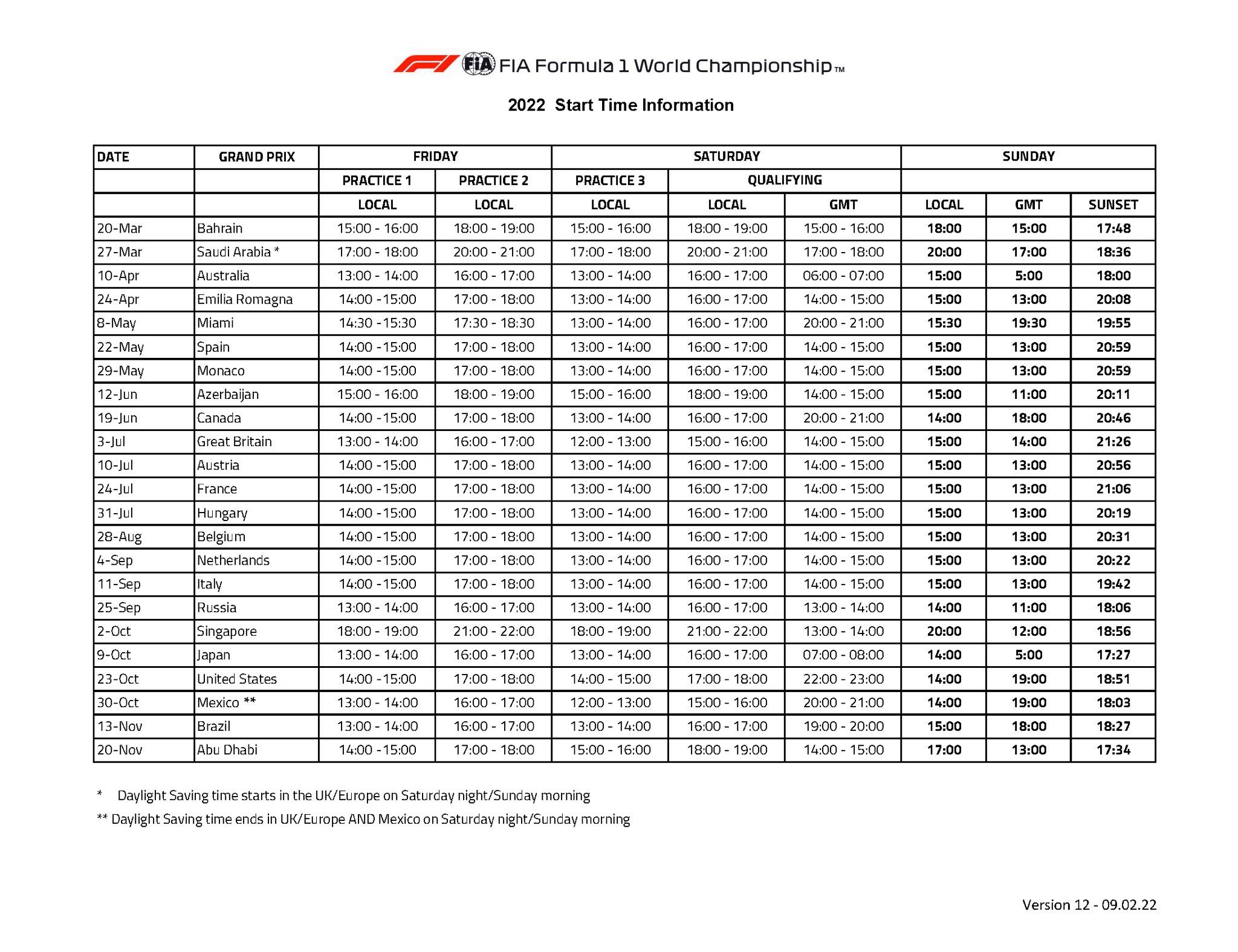 The first part is written by Danny Herbert, with the second by Darshan Chokhani