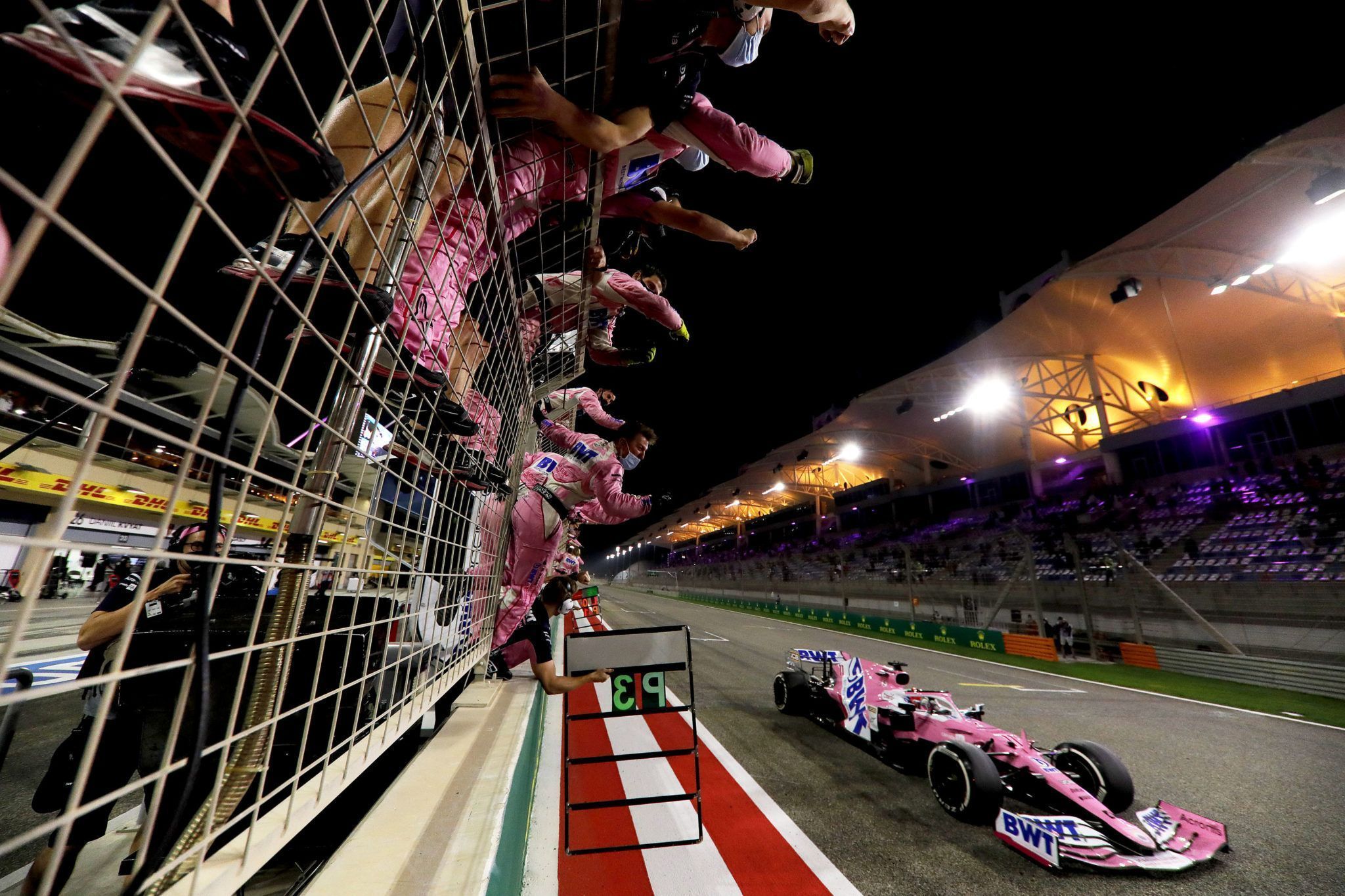 Racing Point driver Sergio Perez is confident he would have been able to keep Mercedes’ George Russell at bay irrespective of the Brit’s puncture.

Perez got ahead of Mercedes’ Russell as a result of the latter’s decision to pit under a safety car – brought out for Williams’ Jack Aitken – on Lap 62 of the F1 Sakhir GP. The Mexican, having already pitted for a second time 15 laps prior, stayed out.

When a rare pit stop blunder from Mercedes forced Russell to pit once more, and dashed Valtteri Bottas’ chance at victory, the Mexican emerged as a frontrunner having overtaken teammate Lance Stroll and Renault’s Esteban Ocon.

On a set of hard tyres, it was clear Perez would not have to pit again, but as Russell resumed his race on a fresh set of rubber, it was also understood that the Brit posed a threat to Perez’s victory.

Having made it past Bottas and the remaining podium runners, Russell set his sights on Perez and began to catch him as the laps dwindled. A fourth pit stop forced by a puncture, though, set him back and took him out of contention.

Perez says he could have maintained his lead regardless of whether or not Russell sustained a puncture. The Mexican argued that the rate at which he was being caught was not indicative of a late-race lead change, though he admits the finish likely would have been a close one.

“He was about two to three-tenths, sometimes four-tenths, sometimes I was matching him. I think the closest he got was 2.4s. The information that we had as a team was that you needed a difference of eight-tenths of a lap to be able to overtake. It was going to be close but I think given the age of my tyres, given the pace I had towards the end, the pace I had in hand, I was going to be able to hold him back to the end,” Perez said.

The result came after Perez fell to the back of the grid as the byproduct of a lap one incident wherein he was touched by Ferrari’s Charles Leclerc, before he spun. The Monegasque, with damaged suspension, was unable to continue, not unlike Red Bull driver Max Verstappen, who – in a bid to avoid the crash – skipped across the gravel and clobbered the barrier.

Perez was forced to pit as a result of the incident, which he says left him deflated. “We didn’t give up after lap one, we got knocked out again,” he said. “I don’t know what happened. I was already doing the corner and I got hit badly behind. I thought the race was over again, but we managed to come back.”

Perez adds that the collision had no negative impact on his eventual pace. “I guess the hit must be good, because we had tremendous pace,” said Perez. The car performed really well. The strategy: I think after Friday we knew already what we were doing. We understood really right the track after the first couple of runs.

“I was going for the podium. But on that you really rely on what happens to the Mercedes and the Red Bulls. But I was really hoping for a podium, I was determined to get one. I got a good launch, a good start and thought I had a good lap one. I was up to second or something like that.”

Further difficulties struck Perez during the safety car early in his first stint, when he explains he locked up his front tyres whilst attempting to warm his brakes. “We went onto a new set of mediums but I did a big mistake during the safety car,” he said. “I locked up, warming up the brakes, I locked up badly the front left tyre and since that first lap of the race, I had so bad vibrations but it was hard to keep the steering wheel tight [in my hands].

Perez explains further that, with such bad vibrations, he had encouraged the team to pit, but that pace was strong enough to convince him to continue. “There were times when I told the team that we should box I was losing lap time but still the pace was strong at that point but what I think what really made our race was to be able to go a bit longer than these two guys and build up a bit of a tyre delta and then we came back strong and we managed to overtake them and I think we had good tyre life until the end.

“Well done to the team, because we understood quickly enough this Bahrain because it’s very different to the last one that we raced on, in terms of tyre usage, tyre energies, so we done on that, to the team, and nice recovery from last weekend,” Perez said, as he scored his first race win since Abu Dhabi 2010 in GP2 and joined Pedro Rodriguez to be an F1 race winner from Mexico. He also now heads the standings of most races before a first win at 190 grand prix: 60 more than Mark Webber.