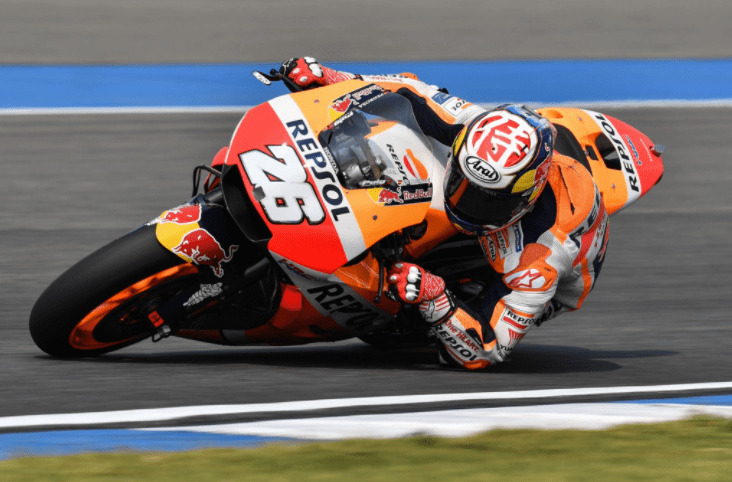 Dani set the best time of the session just before the checkered flag, beating Zarco, who was second, and Marc Márquez, third. Yamaha and Ducati disappoint.

Too early to draw conclusions, and less if it is a new circuit. But if we take a general view of the tests in Thailand, they are far different from what we saw in Sepang. Only one common denominator, strong and constant Hondas. Fasters in one lap and in race pace. On the third day of testing at the Buriram circuit, they have shown it again.

Dani Pedrosa took the best time of the session, 1: 29.781, surpassing the record time of the tests of Saturday, Marc Márquez. If only Marc was able to go down from 1: 30.00, today his teammate and Johan Zarco have joined the club. It has been the only Yamaha capable of competing with the Honda, who occupy three of the first four positions. Márquez has been third and Crutchlow fourth.

Cervera’s rider has had one of the scares of the day when he has fallen on the turn 12. An accident without further consequences. The Honda have taken advantage of its good acceleration in a circuit of long straights where this factor is differential. Maybe that’s why the difference between Ducati and Yamaha have been so big. Honda seems to be clear about the engine that is going to mount and regarding the aerodynamic they will decide in Qatar.

Those who seemed to be in a very good direction but now enter in a sea of ​​doubts are the Ducati. They came out reinforced from Sepang, with Lorenzo and Dovizioso at a great level, but the Buriram tests leave bad sensations. Above all, by Lorenzo. The Spaniard has not found the pace or the sensations and today he has ridden the 2017 motorbike to see the source of the problems. After two tenths in the first two days, today Lorenzo has lapped in 22th position, almost two seconds behind of the fastest lap. Dovizioso was seventh.

Those who are not in a very good mood are Yamaha. Today again, bad results with the eighth position of Viñales and the ninth of Rossi. From the team, but, point out that they have been looking for a good race pace, not qualifying.

The Buriram tests are history and leave Honda one step above the other teams, or two. As they pointed yesterday from Honda, “they are going in the right direction”.