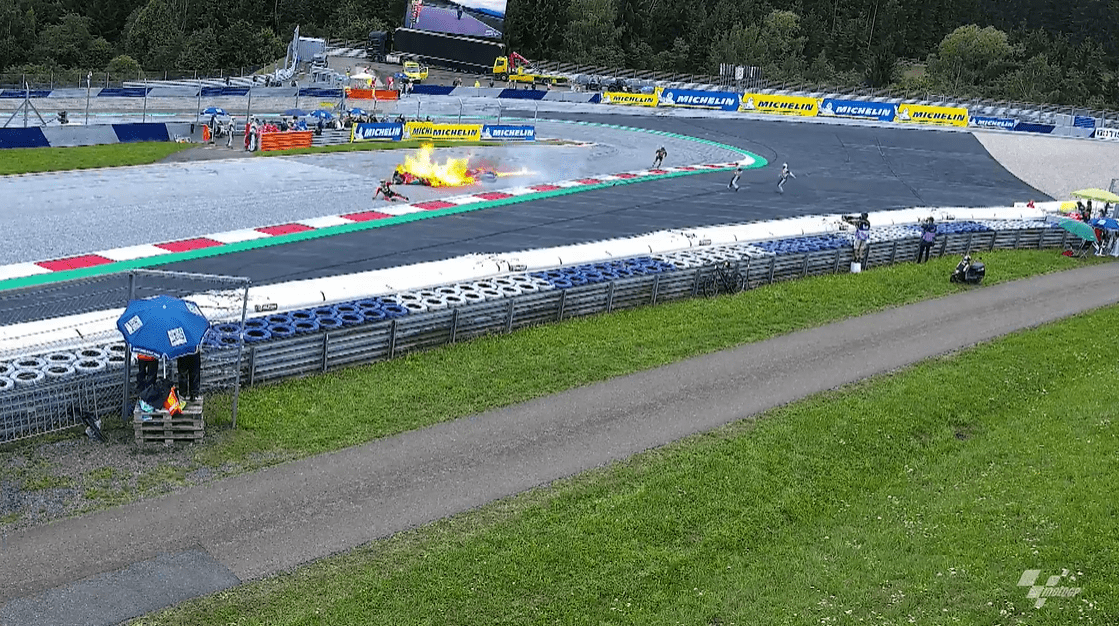 Dani Pedrosa recounts the scary Styrian GP crash and the aftermath as Lorenzo Savadori is set to miss the next MotoGP round after surgery.

The crash for KTM wildcard Pedrosa ended up being a blessing in disguise for the Spaniard, as the aftermath in MotoGP Styrian GP helped him to return on track and finish a respectable 10th, on his return to competitive racing for the first time since 2018.

A lose moment at Turn 3 saw him crash from 12th in the early stages of the MotoGP race. It soon turned dramatic when Aprilia’s Savadori hit the fallen KTM and burst open the fuel tank, which didn’t take long for both the machines to catch fire.

It took the marshals some time to get it under control as the fuel kept burning. Both Savadori and Pedrosa were unharmed from the fire, but the former did have pain on his ankle, as he was stretched off the run-off on the sidelines.

Replays showed him entering the Aprilia box, but soon it was clear that he won’t take the second start. In fact, it was noted that Savadori will need a surgery as early on Tuesday for a fractured malleolus, which was found upon further checks by the doctor.

This would rule him out for next weekend’s Austrian MotoGP race, with a return aimed for British GP. The Styrian GP, meanwhile, re-started where Pedrosa could continue on a second bike, which was tricky to ride, as it was not optimised fully.

Nevertheless, Pedrosa did well to be 10th, as post-race, he explained the scary moment he had at Turn 3. “It was weird when I went up to Turn 3, which goes uphill in a steep way in the apex,” he said when speaking to MotoGP. “So, I don’t know why, maybe the tyre was cold or maybe I touched the white line on the inside, I am not so sure because when I went in and I wanted to pick up the bike on the throttle, I just fell and couldn’t do it.

“I spun there in the middle on the track and it was a bit of a scary moment for me, because I was turning and I couldn’t see well, but I could see bikes going past me. So, I was quite lucky but unfortunately Savadori hit the bike, I feel sorry for him. The second race, it was a bit tricky then because our second bike was set up for the wet but we could make the changes and for the restart I thought ‘OK, let’s try to finish the race’.

“I was more calm, more cautious and I didn’t push too much at the beginning which meant I lost a lot of ground. Once I had the feeling of the track and the bike I could push more and gained some positions as riders around me made mistakes. I was closing up to the group and it was interesting to feel how the tires were working.

“It is different to testing but also what I felt in practice during the weekend. The top ten is good,” summed up Pedrosa, who will get another chance this weekend.