In pouring rain and extreme conditions, FIA Formula 3 European Championship drivers battled for points and positions in the second race of the season. At the 5.793 kilometres long Grand Prix circuit in the royal park of Monza, Pascal Wehrlein (kfzteile24 Mücke Motorsport) prevailed and was presented with the winner’s trophy after 14 laps.

Raffaele Marciello (Prema Powerteam) was classified second from Tom Blomqvist (Eurointernational). Because of the continuous rain, the clerk of the course decided to let the field start behind the safety car into the planned 19 laps. The field was released after four laps. 18-year-old Pascal Wehrlein did not keep the lead for one full lap, as he got off the track on the slippery asphalt and lost first place to Raffaele Marciello. After that, Wehrlein started the hunt for the Italian and a

range of fast laps allowed him to close up into the slipstream of the Prema driver. On lap eleven, he eventually overtook Marciello and went on to win. Tom Blomqvist, Felix Rosenqvist (kfzteile24 Mücke Motorsport), Harry Tincknell (Carlin), Alex Lynn (Prema Powerteam), Félix Serrallés (Fortec Motorsports), Josh Hill (Fortec Motorsports), Luis Felipe Derani (Fortec Motorsports) and Sven Müller (ma-con) rounded out the top ten in a race that saw plenty of spins and drivers off the track. Måns Grenhagen (Van Amersfoort Racing) had the heaviest accident when he attempted to overtake Jordan King (Carlin) on lap twelve but hit the back of William Buller’s (ThreeBond with T-Sport) car. The Swede’s car barrel-rolled several times, but the driver escaped unscathed, just like the other two people involved. After that, the race was neutralised behind the safety car and finished that way. 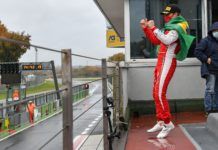