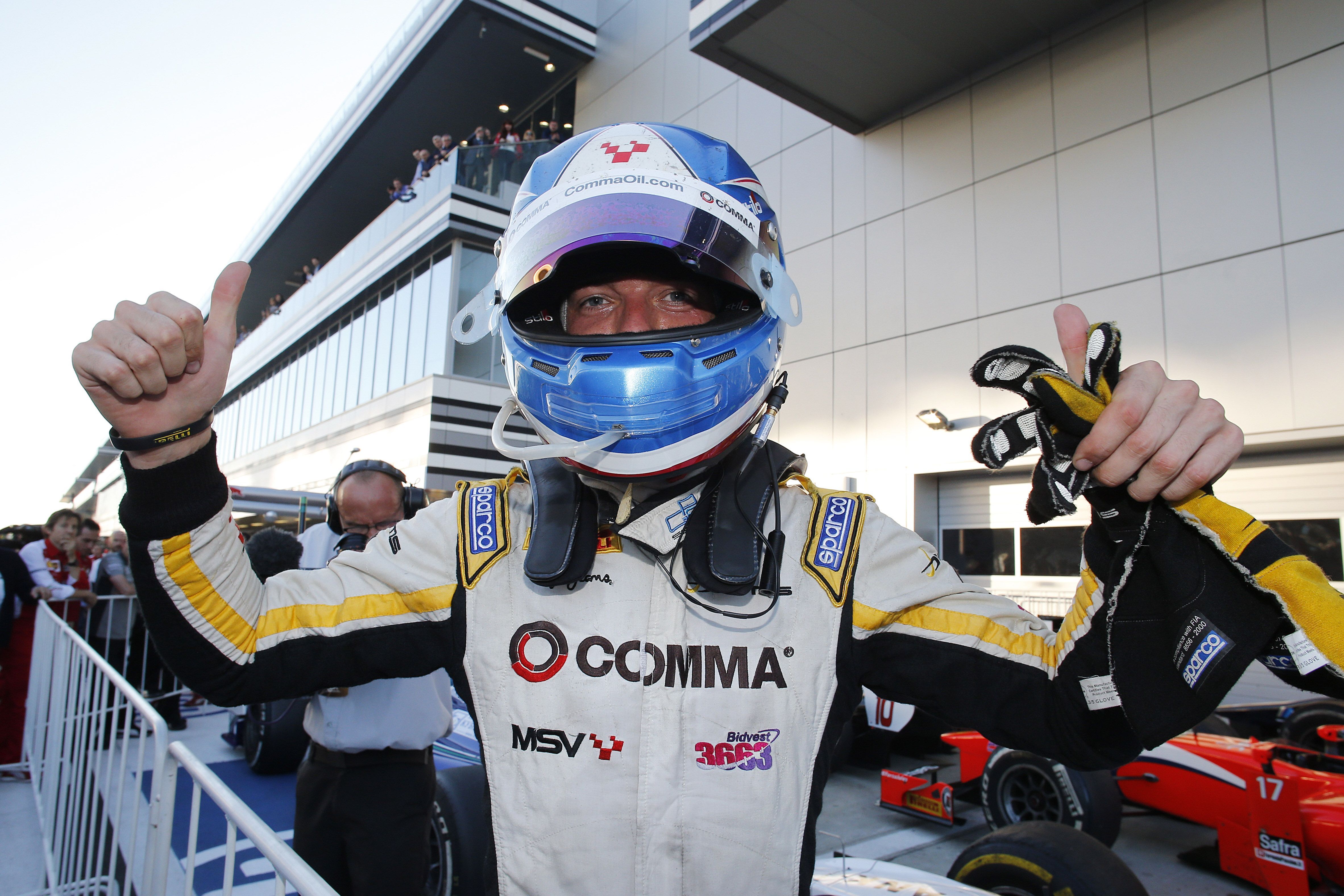 Jolyon Palmer has achieved the fourth win of the season, the final, in a new place, the Olympic circuit Sochi. The British is already the champion of the GP2 Series for the 2014 season. Evans finished second followed by Rafaelle Marciello.

The first race of the GP2 of the history in Sochi started with Vandoorne and Arthur Pic starting from the front row of the grid. The lights went off in Sochi with Campana not reach the grid. Still, the race began with an impressive start from Izawa, who stood first. Vandoorne regained first place in the second turn and Evans got rid of Pic and Izawa in the fourth. Vandoorne led the first round with Palmer second followed by Pic, Izawa, Evans, Marciello, Nasr (who came twelfth after being penalized) and Coletti was in TOP8 in a first lap full of overtaking.

Thus, in the third lap with the two leaders of the weekend in the first two positions and the fastest lap for Jolyon Palmer, in a very clean start.

Arthur Pic was the first to stop on lap six, clearing the way for Izawa, hard tyres and Evans, with soft. Both drivers would fight for podium places. Meanwhile, Nasr received a Drive Through penalty while Coletti caused the first Safety Car of the race. That would be exploited by Palmer, Nasr, Evans, Marciello, Negrao, Abt, Sørensen, Leal, Lancaster and Binder. Vandoorne could not stop in box as the Belgian’s engineer had told himlater. Nasr served the penalty with Safety Car on track, because of having advanced 5-6 cars at the start.

That made on lap 10 Vandoorne continue to lead the race, followed by Izawa, Markelov, Haryanto, Ellinas and Richelmi as top six drivers who had not stopped in the pits. The first of those who had already made the stop was Palmer, seventh, ahead of Cecotto, yes they had. Evans and Marciello completed the TOP10. This meant that, a priori, the struggle for victory was between Izawa and Palmer.

After 3 laps behind the safety car, when the competition was rebuked, Vandoorne escaped while Izawa made ??a mistake and lost many positions leaving the second to Markelov. A very crazy restart with many overtaking. Nasr received a warning and this left the championship on a silver platter to Jolyon Palmer.

Vandoorne had the fastest lap of the race in the middle of this, trying to get away with Palmer. Palmer and Evans got rid of Richelmi and rose on the third and fourth places with ten laps to go, when Vandoorne kept improving lap by lap.

Markelov stop with five laps to go leaving Palmer in second place followed by Evans, who was trying to overtake him;  it was the direct struggle for victory. Vandoorne had to stop only four laps to go, being the last to make the stop. The Belgian back on track was in sixth place with new tyres for squeezing the maximum. Palmer became the fastest lap of the race at the time, Evans responded one lap later with the best lap of the race and came in the wake of Palmer to fight for victory.

Palmer was getting a distance of salvation with Evans, secure victory with just two laps to go. While Vandoorne had the fastest lap of the race and stood right behind Negrao in the fight for fifth place and a possible third Marciello hands. Finally this got only the fifth.

So Palmer wins the GP2 Series championship 2014 with three races. As tenth champion of this category Palmer celebrates victory in Russia hoping to find a seat on the F1 grid next year.