Home Single-Seaters Indycar Pagenaud vs. Power for Title at Sonoma 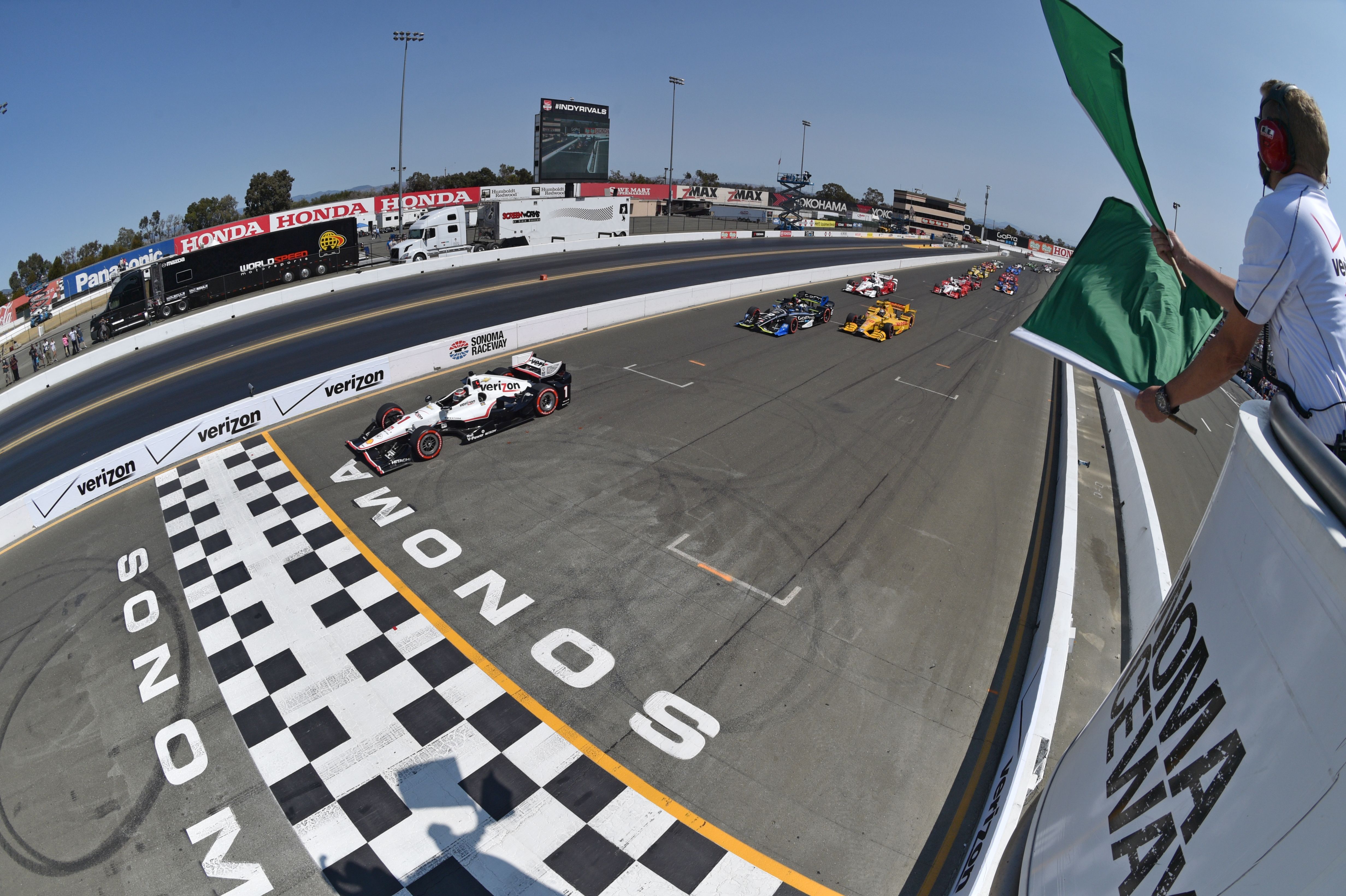 The 2016 Verizon IndyCar Series concludes this weekend with the GoPro Grand Prix of Sonoma. Two drivers remain in the championship battle: Simon Pagenaud and Will Power, both driving for Team Penske. Pagenaud leads the 2014 champion Power by 43 points before the double-points season finale. Scott Dixon and Hélio Castroneves share the third place, 104 points behind Pagenaud and out of title contention.

Simon Pagenaud in the No. 22 Chevrolet dominated the early season. The Frenchman claimed the championship lead after two races with second places from St. Petersburg and Phoenix. Those were followed by three consecutive victories at Long Beach, Barber, and Indianapolis road course. After the Angie’s List Grand Prix of Indianapolis, he was leading the championship by 76 points to the defending champion Scott Dixon. Meanwhile Will Power was only in 10th place, 137 points behind his teammate.

Will Power in the No. 12 Chevrolet started the season by qualifying on top at St. Petersburg. However he missed the race due to concussion-like symptoms that were later diagnosed to have been just an inner-ear infection. Yet in the following race the Australian finished third; his only podium of the first seven races.

The 100th Running of the Indianapolis 500 was unsuccessful for both title contenders. Pagenaud’s podium streak ended with a 19th place whereas the previous year’s Indy 500 runner-up Power finished in 10th place.

A week after the 500, both drivers returned to podium in the second Detroit race. Power led Pagenaud in a Penske 1-2 that was Power’s first victory since previous year’s race at the Indianapolis road course.

The victory at Detroit started a great run for Power. With a victory at Road America, a second place at Iowa, and a victory at Toronto, Power had reduced Pagenaud’s lead to 47 points before Mid-Ohio as the Frenchman had missed the podium in three those races.

Pagenaud achieved an important victory at Mid-Ohio where he led Power in a Penske 1-2. Yet in the following race at Pocono, Power won whereas Pagenaud was 18th after crashing out of the race. That reduced Pagenaud’s lead to 22 points with three races remaining.

After Watkins Glen, Pagenaud’s lead is 43 points, a big lead yet four points less than the deficit Scott Dixon made up to Juan Pablo Montoya at Sonoma last year to win the title in a victory countback.

The table below shows the different points scenarios for both drivers. 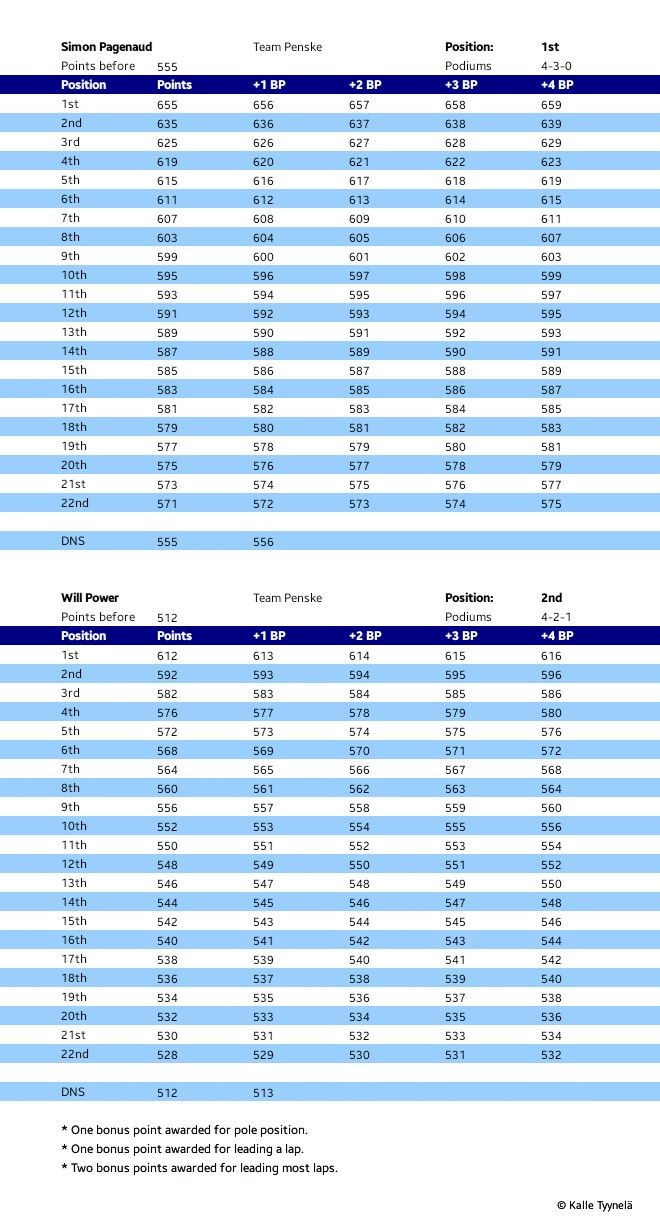 As we can see, Power can score a maximum of 616 points if he wins plus gets bonus points for the pole position, leading a lap, and two bonus points for most laps led. If Power accomplishes that, Pagenaud will need a fourth place. If Power wins or finishes second and there is a tie, Power will win on a tiebreaker. In other scenarios Pagenaud wins the tiebreaker.

Sonoma Raceway has been a successful venue for Power. He has three victories at Sonoma and only once in this decade he not started on pole. For that reason, winning and scoring all the bonus points isn’t unrealistic for him, and it would put the pressure on Pagenaud to get a good result.

However, Power doesn’t have a great record in season finales. Although he has finished every season this decade inside the top four, he won his only title in 2014 and lost the lead in final races in three consecutive years to finish as the runner-up in 2010-12. Last year he came into the finale at Sonoma with a 61-point deficit, yet contact with the championship leader and Penske teammate Juan Pablo Montoya destroyed both drivers’ title dreams.

Power suffered concussion-like symptoms in the Watkins Glen crash with Kimball. However on the following week he was cleared to race at Sonoma so there shouldn’t be much doubt about his performance.

Pagenaud has never won the Verizon IndyCar Series championship; third in 2013 has been his best result. However he seems to have been in control of protecting the lead in the last few races, except for the crash at Pocono. He beat Power for the victory at Mid-Ohio as well as extended his lead at Texas and Watkins Glen despite not finishing on the podium.

Given how close Pagenaud and Power perform to each other, it’s hard to see Power making up the 43-point deficit. Yet Scott Dixon showed last year one can make up that gap, especially if caution periods play a role in the race.