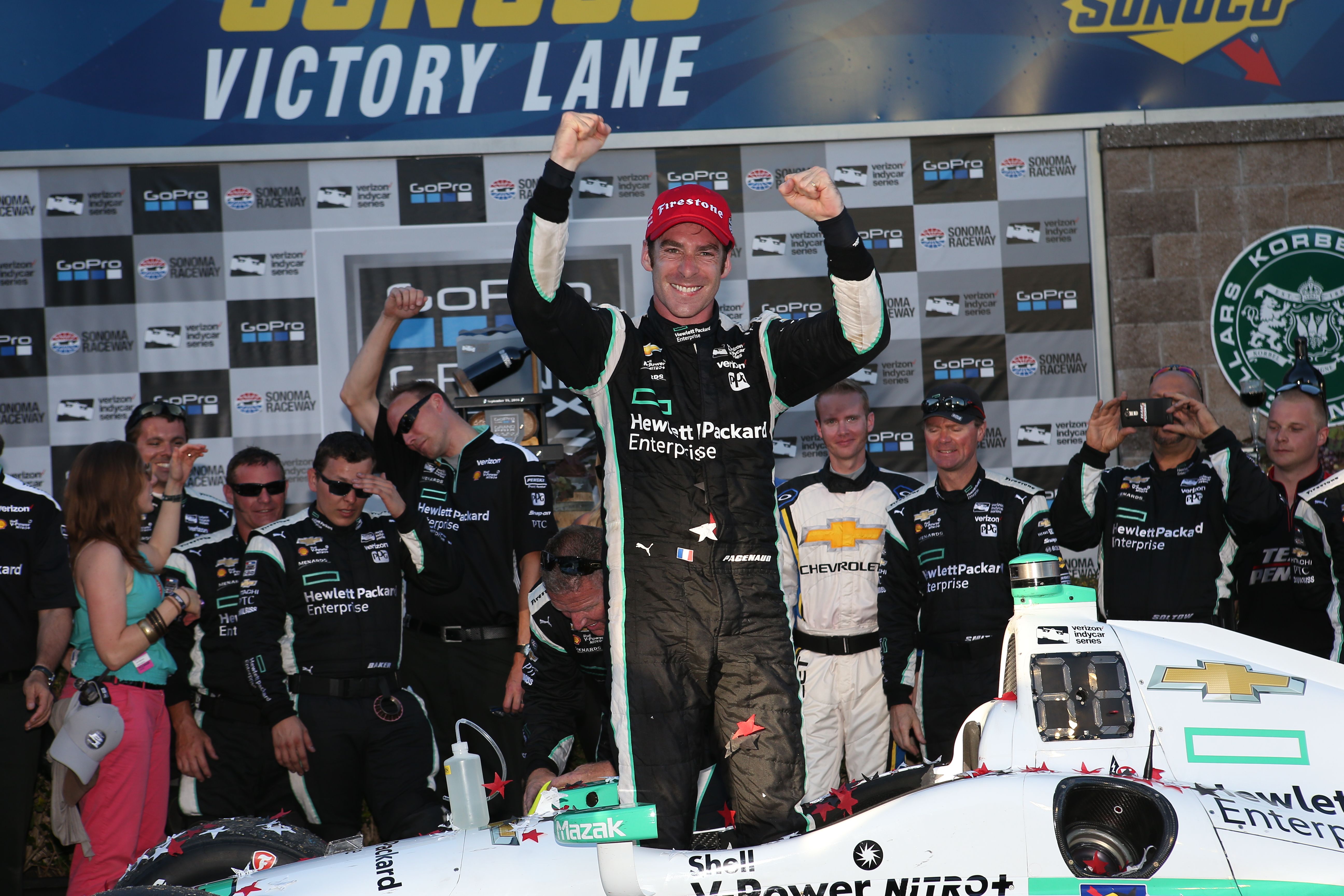 Simon Pagenaud secured the Verizon IndyCar Series championship with style as he won the GoPro Grand Prix of Sonoma in a dominant fashion. Pagenaud’s only title rival Will Power lost his title chances with transmission issues, yet retained the second place in the standings ahead of Hélio Castroneves who completed the 1-2-3 for Team Penske.

Starting from pole position, Simon Pagenaud retained the lead at the start and was followed by his Team Penske teammate Hélio Castroneves. Pagenaud’s title rival Power jumped past Juan Pablo Montoya at the start for third place. Graham Rahal retained the fifth place whereas Ryan Hunter-Reay had to give up positions to Alexander Rossi and Josef Newgarden who had started from eighth and 10th places, respectively.

Power and Montoya came to their first stops after 15 laps and switched to harder black tires. A lap later Pagenaud and Castroneves made their stops, also switching to black tires. While Pagenaud stayed in the lead with ease, Power was able to overtake Castroneves.

Castroneves from third place was the first of the leading Penske quartet to make his second stop after 29 laps, what implied a four-stop strategy.

The Verizon IndyCar Series title got all but decided on lap 36 when Power’s No. 12 Chevrolet slowed down and eventually stopped just before the pit entry with transmission issues. Caution came out on lap 38 as Power’s car was towed into pits. Power lost eight laps in the pits, yet rejoined the race, aiming to score enough points to retain the second place in the standings.

The race went back to green on lap 42 with Pagenaud leading ahead of Castroneves, Charlie Kimball, Rahal, and Montoya. Castroneves and Kimball were running on a four-stop strategy, making their third stops after 50 and 48 laps, respectively. Pagenaud, Rahal, and Montoya were the top three before the final stops.

Pagenaud and Montoya made their final stops after 61 laps. Rahal was able to stay out one lap longer, yet still rejoined between the second-placed Pagenaud and the fourth-placed Montoya. Castroneves was leading the race on a four-stop strategy.

Castroneves came in for his final stop after 69 laps. He rejoined in eighth place, just behind Marco Andretti. Castroneves was able to make an important overtake for the seventh place, keeping him third in the standings ahead of Josef Newgarden who was running in sixth place.

In the lead, Pagenaud and Rahal were pulling away from the third-placed Montoya. Rahal wasn’t able to challenge Pagenaud who won the race by 3.2 seconds. Montoya scored his first podium in nine races with the third place.

This year’s Indianapolis 500 winner Alexander Rossi was running in fourth place until he almost run out of fuel before the finish line and was overtaken by his Andretti Autosport teammate Ryan-Hunter Reay. Despite that Rossi was the Rookie of the Year in 10th place of the championship.

Click here for the full results of the GoPro Grand Prix of Sonoma.