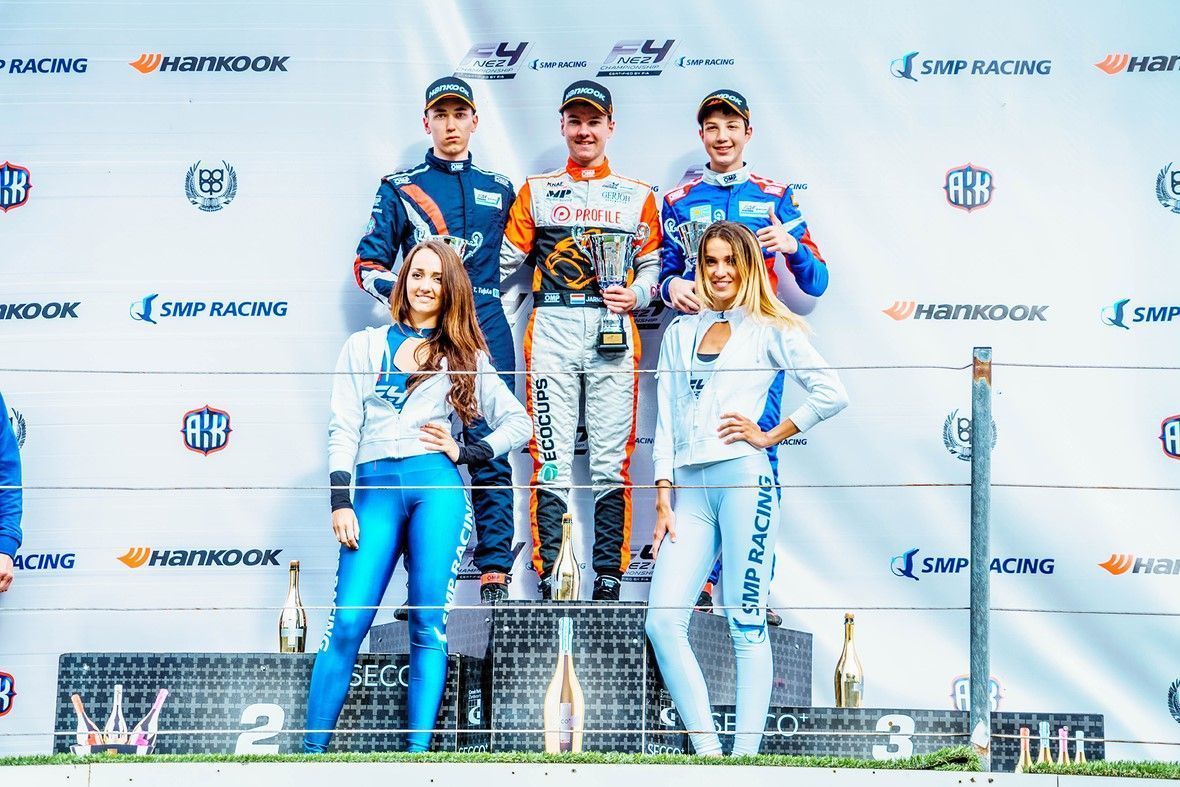 The weekend came to an end on Circuit Park Zandvoort and yesterday was the last day of competition in the Netherlands. Sunday was featuring the second qualifying session and two races, which made it a very long day for the 2016 SMP F4 NEZ drivers.

The second qualifying session started early in the morning, for fifteen minutes fight. As the pole position was changing hands on each and every lap, from Nikita Volegov, to Juho Valtanen, Tuomas Tujula, Alexander Vartanyan and Jarno Opmeer, it was finally the new Red Bull Junior driver Richard Verchoor who snatched his third pole position of the season, which would apply for Race 3. Jarno Opmeer, leader of the championship and Tuomas Tujula, Race 1 winner were completing the Top 3. Xavier Lloveras set the fourth fastest lap of the second quali and secured a second row for the late afternoon race. Danny Kroes set a fantastic fifth time, followed by Russian Alexander Vartanyan, Rasmus Markkanen, Juho Valtanen, Nikita Volegov and Tuomas Haapalainen to complete the Top 10.

“I am very happy about the Pole Position, I hope we will have a good day today” commented Richard Verschoor.

The 18 minutes + 1 lap Race 2 started in the early afternoon, with Tuomas Tujula taking a smooth start from pole position after his Race 1 win and taking the lead while unfortunate Richard Verschoor stalled his Tatuus-Abarth F4-2014 car on the grid, allowing Jarno Opmeer and Juho Valtanen to jump into the action. As the race went on, there were fights on all the fronts, from Tuomas Haapalainen chasing down Vladimir Tziortzis for P13, Richard Verschoor on a mission going up the classification from P11 to end up P6 after an epic battle with Alex Vartanyan and Jarno Opmeer taking the lead from Tuomas Tujula after one lap and being chased down by Juho Valtanen and having a wheel-to-wheel battle until the chequered flag where the Dutch passed the finish line with a gap of 0.0014!

“It has been a hard race, but very interesting one. We had a good fight with Jarno! I tried to overtake him in the last lap as I was closing the gap drastically, but never managed. I am anyway happy as those 18 points are important ones”, said Juho Valtanen.

As the afternoon was coming to an end, it was the last chance on track for the youngsters to show their skills. Richard Verschoor was on pole position, when the lights went off, he took off and led the field through the first lap in which Roman Lebedev went out, causing the Safety Car deployment for two laps. As the action resumed, Tuomas Haapalainen and Artem Slutskii had a contact, forcing both drivers out of the last race, and causing another Safety Track to be deployed for two laps. The restart went smoothly, but Rasmus Markkanen was penalized by a black flag for not respecting a Drive Through, while Richard Verschoor was serving his, from the lead, for a jump-start. The Dutch driver therefore ended his race P13, out of the points. This made Jarno Opmeer’s day, as the Championship leader took his third win of the season, with Tuomas Tujula again on the podium for this Dutch weekend and an amazing Alexander Vartanyan in P3.

“The last race was quite difficult because of wet conditions. That made everyone to slide on the track and caused several safety car appearances. This first podium of the season feels very good!”, said Alexander Vartanyan.
“During winter testing we had the pace, we were competitive, but I was not expecting to be winning races straight from the beginning and not even dreaming about leading the championship” reported Jarno Opmeer.

The third round of the 2016 SMP F4 NEZ Championship will be in Circuit Park of Zandvoort, during the Max Verstappen Festival, on June 3rd, 4th and 5th.