Home Single-Seaters FIA Formula 2 One-two for DAMS at the Hungaroring
Share
Facebook
Twitter
Google+
WhatsApp
Linkedin
ReddIt
Telegram
After 38 laps, Alex Lynn won the first race of the weekend ahead of his teammate Pierre Gasly, bringing home a one-two for DAMS. Sirotkin completed the podium on 3rd.
When the lights went off, Lynn had a good start and could keep first place, while Vandoorne lost many positions. Both DAMS were on top after the first corner. Pic was ahead of Marciello but he regained his position back shortly after. The Safety Car went on track after Sergio Canamasas crashed against the wall.
Vandoorne, who started with softs as opposed to Lynn, pitted on lap 6 and had an unsafe release after he barely avoided Julián Leal. He was given a 5 second penalty which would be added at the end of the race. His early pitstop allowed him to drive fast without traffic.
Lynn made his medium tyres last for 23 laps. He came out on 12th place behind Rossi and Pic. With fresh tyres, he was able to overtake Pic, Rossi and Haryanto. He was 2.1 seconds behind Vandoorne with 6 laps left. The Brit got the lead of the race back on lap 32. Gasly overtook Haryanto for 3rd and also Vandoorne. Finally, because of his 5 second penalty, Vandoorne finished 5th behind Sirotkin and Haryanto. Matsushita will start tomorrow on reverse pole after finishing 8th today. 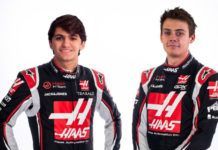 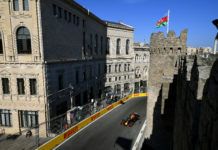 F1 confirms postponement of Azerbaijan GP due to COVID-19 pandemic 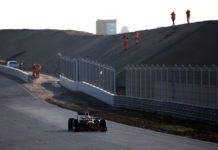 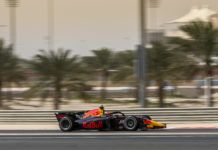