Esteban Ocon and Daniel Ricciardo talk about being teammates at Renault as Aston Martin signage is up at its F1 base.

While Ricciardo had his third teammate in the form of Ocon in three consecutive F1 seasons in 2020, – from Red Bull’s Max Verstappen to Renault’s Nico Hulkenberg – the Frenchman had his second in three years after racing with Sergio Perez at Racing Point in 2018.

Fair to say, Ocon did not enjoy the time with Perez, while Ricciardo seemingly had fun with Verstappen, Hulkenberg and also the young Frenchman. The Australian will have his fourth teammate in four years, as he pairs up with Lando Norris at McLaren in 2021.

At the same time, Ocon will side with Fernando Alonso at Renault. Unlike Perez, the Frenchman seemingly enjoyed his time with Ricciardo. “He’s telling a lot of jokes, obviously – and they’re not all good,” he said to media including F1, Motorsport Network, Racefans.net, BBC and more. “That’s something that I’ve learnt.

“On a serious note, he’s been a very, very good benchmark for me – run a lot of things – he’s top one on all sessions and he’s always pushing and extracting the best from the car and that’s been pushing me and pushing my side of the garage as well to do better. You need to get that car to get around in the fastest way possible and this year I’ve been learning that alongside Daniel. It’s been good to have him as a benchmark for my return.”

From Ricciardo side, he felt having a younger generation driver like Ocon was beneficial for him to remain at the front and show his mettle, especially, as he readies to pair up with Norris next season. “I think any time you have a new team-mate up alongside you, there’s always a challenge in any shape or form,” he said.

“I think, if I go back to last year, Hulkenberg – it’s not that common these days – but he had more experience than me and more experience within the team so there was a bit I could learn through that. With Esteban, he’s part of the younger generation now – young and hungry and they don’t seem to waste too much time getting up to speed.

“I think he always kept on your heels one way or another when you come across another competitor. I think with team-mates you work together to get the team going but, at the end of the day, you guys are the biggest rivals as well. I think, high-speed corners, he’s pretty good.

“He’s not afraid, he’s not scared so think high-speeds, I think you enjoy those don’t you?,” summed up Ricciardo, who ended up fifth in the standings with 119 points, while Ocon was 12th with 62, having secured his first podium in F1.

In other news, meanwhile, a Racing Point aerodynamicist, shared an image of the new ‘Aston Martin’ signage up at their Silverstone base, as the F1 team readies itself with its new identity ahead of the 2021 season. The makeover is ongoing amid the winter break.

The signage only has Aston Martin on it, with no sponsor name, which is as like on the FIA entry list. Initially it carried BWT in the team name, but a revised list saw it omitted amid speculations regarding Cognizant taking over as the title sponsor space.

Interestingly that the account which uploaded is no longer there but we managed to take a screenshot before it: 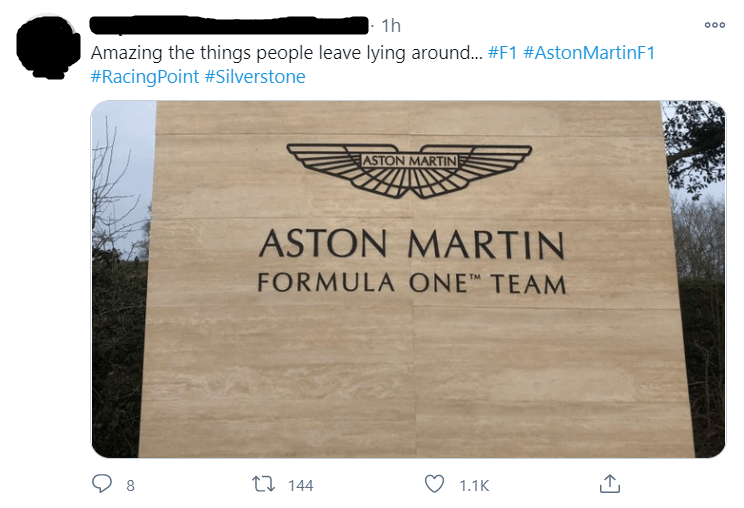 Here’s how the drivers’ fit in tier system

Here’s the story behind sale of Force India