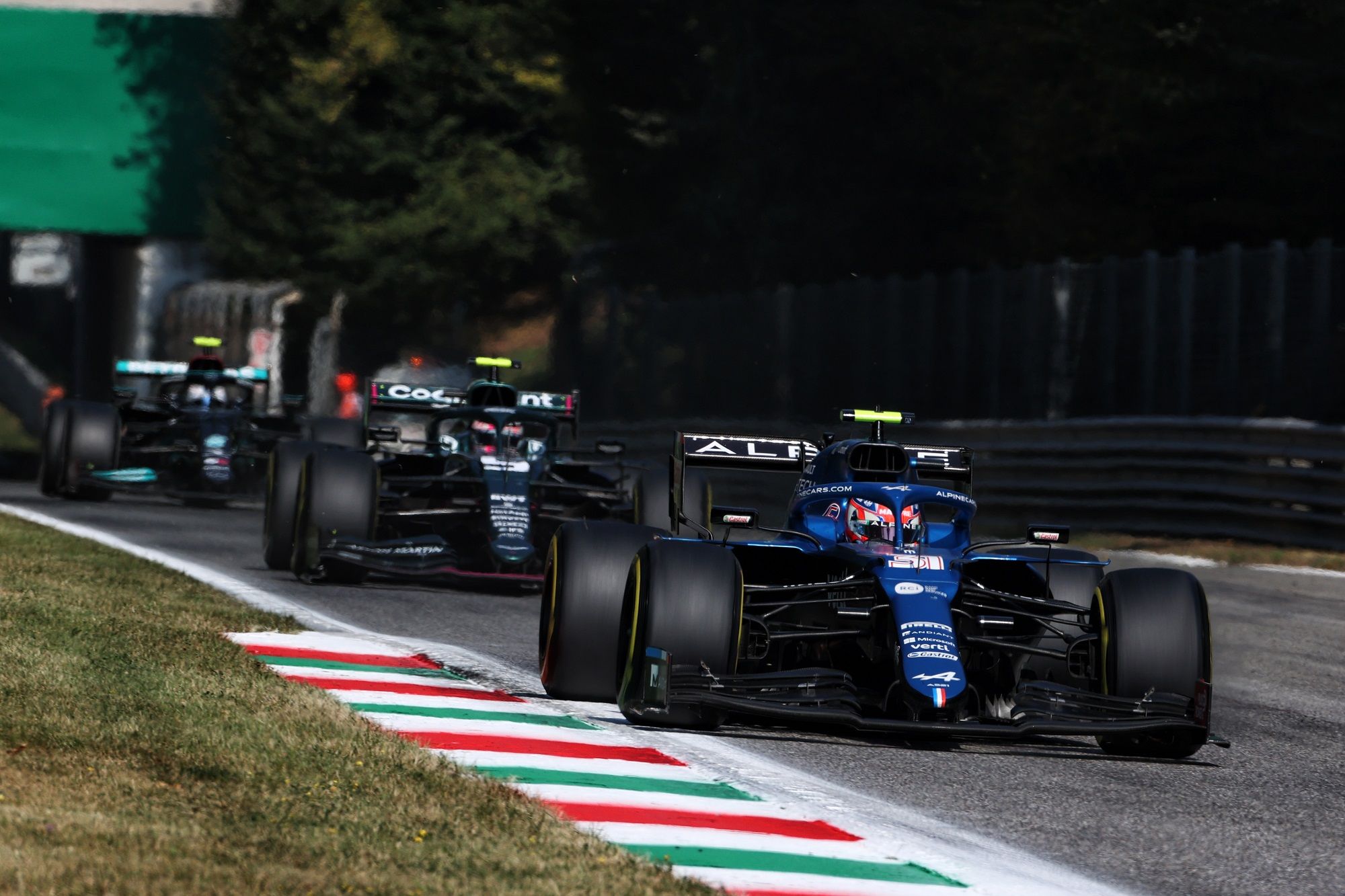 Esteban Ocon says he disagreed with his two penalties in F1 Italian GP as Michael Masi explained their view, while Sebastian Vettel rues his bad luck.

It was the weekend of penalties, Alfa Romeo’s Antonio Giovinazzi got one, so did Red Bulls’ Sergio Perez, but Alpine’s Ocon received two, one for an incident with Williams’ Nicolas Latifi and the other was with Aston Martin’s Vettel. As always, it was tight around the midfield, particularly at the start. The Frenchman feels aggrieved at both.

The incident with Vettel is kind of marginal and there are possible arguments for and against same but his front axle was ahead of Ocons rear axle. A small amount of movement from the Frenchman triggered that penalty. Marginal maybe but rules are rules.

As per Ocon, the track narrows but in fairness, there is very little evidence of the track narrowing at that part. What aggrieved him was the happenings in 2019 at Turn 4, when Lewis Hamilton and Charles Leclerc were cleared with a warning. As for the Latifi incident, he reckoned, he had nowhere to go while they were jostling for places together.

“It was penalties, it was two and not one,” started Ocon, when speaking to written media. “One was at the start with Nicholas at Turn 4, where I had to give the place back to him which took a lot of time, which to me doesn’t feel correct because I didn’t really gain an advantage on that one. And then for an incident with Sebastian, which is a racing action.

“It is not really a racing incident because the same happened to Charles and Lewis in 2019, and there was no action there taken. We had no damage on the car, nothing really happened, and that cost me good three places, I would say so. It is a bit frustrating but it’s been a really solid weekend from both sides of the garage and I am pretty pleased that we can extract again almost the maximum of the performance each time,” summed up Ocon.

When pressed further to explain why he didn’t think it warranted penalties, Ocon added more: “In the first case of Nicholas, to me the overtaking was done before the braking zone because Nic he was basically stuck behind another car and so I just went on the outside. I could have made the car, but basically Fernando lost the rear and that made me avoid what could have happened in front.

“So, I took a split decision to cut the corner and it did gain an advantage because I passed Fernando, but I gave back the position to Fernando straightaway. I have released the throttle and you can clearly see that I gave him the position. One with Seb, we were side-by-side, a bit too close but basically the track narrows once you arrive in the braking zone.

“So, I didn’t really move the steering wheel but it is just that the track narrows and that’s what happened with Charles and Lewis and if that incident didn’t have any penalties then mine shouldn’t have as well, because it is two of the same thing. I normally agree with the stewards but that time I disagree with both I have to say,” summed up Ocon.

In fairness, Ocon may even have had a valid argument regarding Latifi. With regard to the second incident, as stated above, the incident was more or less a copy of Hamilton/Leclerc. Masi, meanwhile, clarified what changed from then and now.

“The 2019 incident was one of the ones we did a complete discussion with all of the drivers, team principals and sporting directors,” said Masi. “It was sort of deemed in that situation, probably a five-second penalty would have been better than the black and white flag.”

While Ocon still managed to score a point, it wasn’t the same for Vettel, who had a nightmarish time, where he not only had the incident with the Frenchman, but also Lance Stroll and Mick Schumacher, which left him with damage.

“It was not our day,” said Vettel. “My race was done on the first lap. I made a good start and managed to avoid the bottleneck through the first chicane, but I was pushed wide at Turn Six and lost a lot of places, which was made worse by drivers cutting the chicane at Turns Four and Five before.

“The car was then damaged too, so it was impossible to really recover. We then pitted just before the Safety Car, which was also unlucky. It gave us hope that we could perhaps close up on the cars ahead, but there was just too much ground to make up. Esteban and Mick also made contact with me, which did not help. I enjoyed a good battle with Robert towards the end and we did all we could,” summed up Vettel.

There are arguments for and against penalties. Some can be quite harsh some can deemed racing incidents. At the end of the day, fans want to see racing, drivers want to race, there will always be some semblance of controversy on track but it is racing. Incidents will happen, particularly early on when there is always a tremendous amount of fight.

The first lap of any Grand Prix can always be contentious. Even though drivers do give vent to their feelings over team radio, they know incidents happen and will happen again and again but maybe there should be a bit of discretion, particularly the opening lap.

Here’s what happened between Esteban Ocon and Sebastian Vettel: https://www.formula1.com/en/latest/video.2021-italian-grand-prix-sebastian-vettel-makes-contact-with-esteban-ocon.1710703049786215305.html