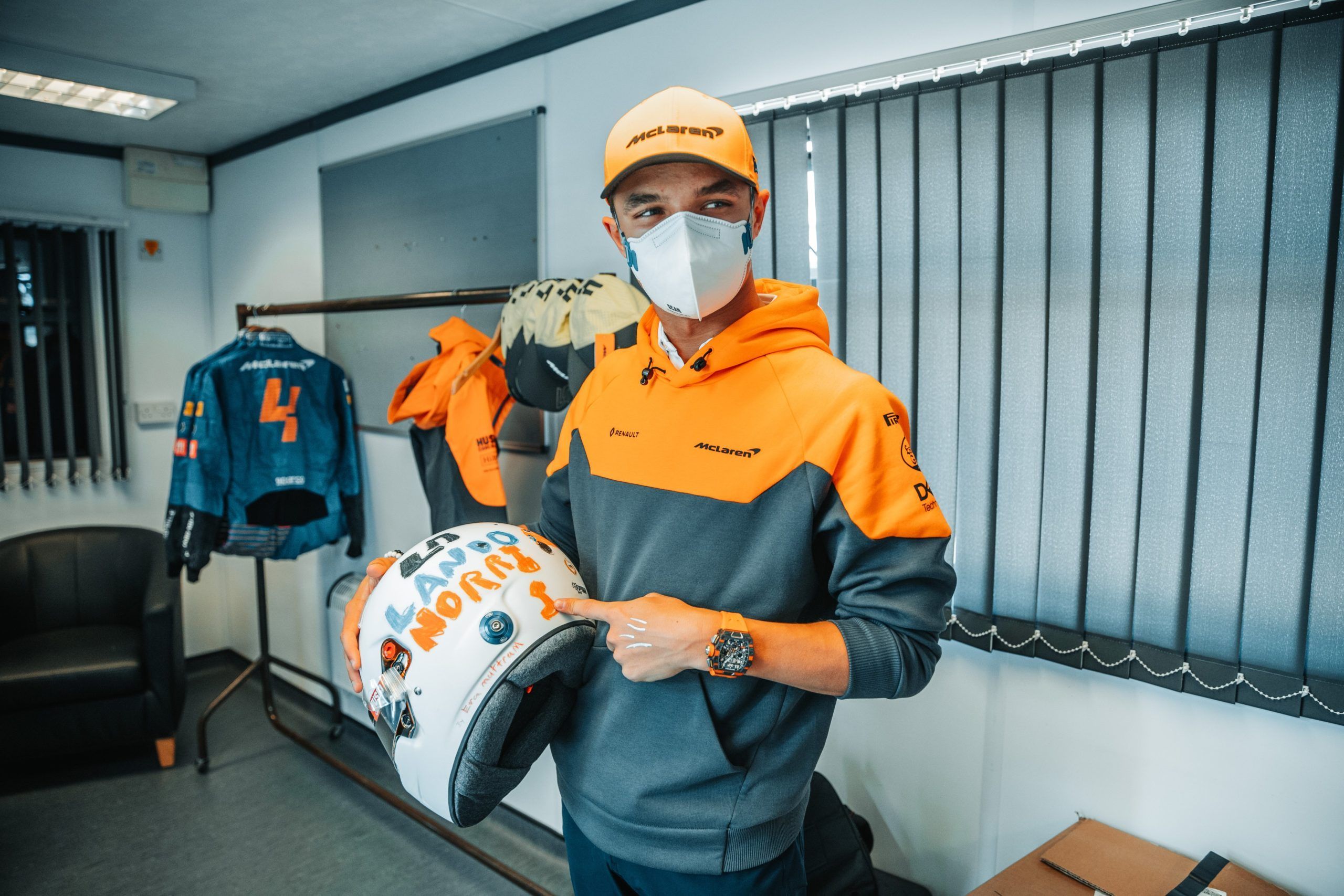 Lando Norris has selected a 6-year-old’s helmet design for this weekend’s British GP as McLaren cautious about upgrades in 2020 due to engine change in 2021.

Norris ran a competition, which he announced on his Twitch for fans to design a special helmet for this weekend’s F1 British GP – his home grand prix. With it being a closed event, the Brit cannot have fans at the circuit but he played his part through this.

Revealing the design on Twitch on Thursday at Silverstone, Norris surprised everyone by selecting a 6-year-old Eva’s piece. The helmet is all-white with his name ‘Lando Norris’ and his initials ‘LN’ all over it in orange, blue, black, green and red.

His idea behind selecting an amateur design as opposed to a heavily finished product from a grown-up fan, was a reminder to himself as to when Norris as a young kid would draw various things, whether helmet or race suit or even racing cars.

Moving on to discuss about the 2020 F1 season and step towards 2021, McLaren’s Jame Key talked about their development programme. Ahead of the season, the year was termed as precarious one in the development race.

But COVID-19 and the subsequent alterations to F1’s rulebook and calendar have turned what would have been a tough year on teams into an even tougher one. While the new-look cars have been delayed to 2022 – something that will have brought relief to technical departments up and down the grid – development will still be taking place on the 2020 chassis’ albeit not hugely for 2021.

Yet now, F1 teams will have to balance this development between an onslaught of races occurring on what is almost a weekly basis. In doing so, McLaren have an added layer of difficulty to contend with as they will be changing engine suppliers for the next season.

The team’s technical director – Key – described the immense challenge of this transitional phase, and some of the upgrades that will be coming in over the next few weeks. “We have come away from the first triple-header recognising similar strengths and weaknesses in the car from those  we saw back at testing in Barcelona,” he said.

“This is good because it allows us to keep our priorities for development consistent with what we had previously planned. The British GP will see a continued evolution of the MCL35 with some developments that will be tested over the coming race weekend.

“We’ve got a unique challenge in balancing upgrades for this year while ensuring our 2021 car is moving ahead in parallel, as the only team to be changing engine partners between 2020 and 2021, our design work and planning for next year is more critical than for others.”

McLaren team principal Andreas Seidl added on the development, and where they stand in the pecking order. “In terms of pecking order than looking ahead, also looking into ’21, I still think that despite, let’s say the homologation of various areas of the car,” he said.

“I think there’s still room to make steps in terms of performance also for each individual team. Therefore, I still think that it can change also for next year. One thing I know for sure is that the Mercedes will still be very strong next year.

“Because the gap they have for the rest is so big. But especially in the midfield the gap is so tight between the teams that one or the other token could change the pecking order quite easily.” The team has extra leeway from the FIA due to engine change but it won’t be straight-up performance related which they will be strictly monitoring.