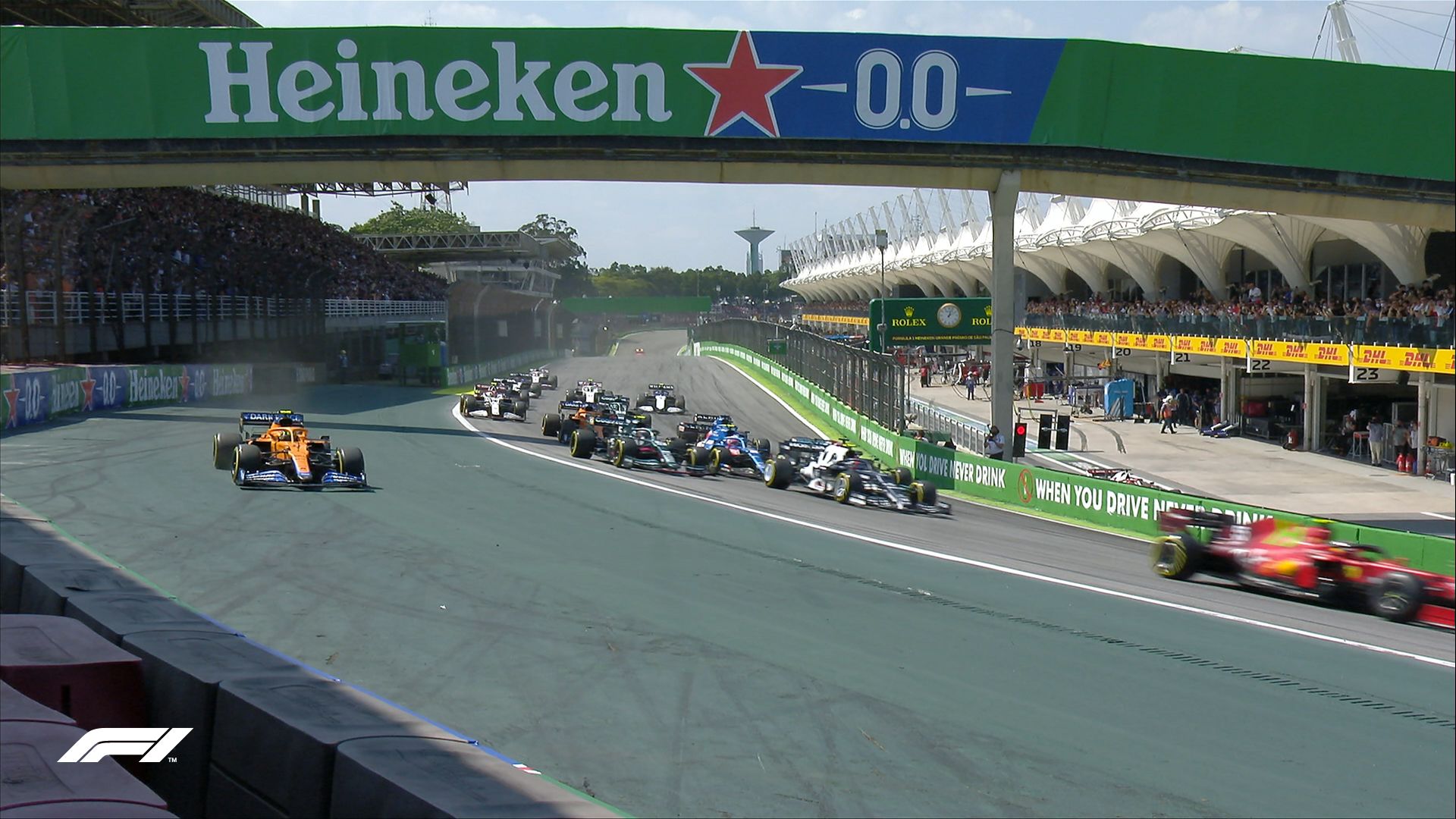 Lando Norris and Carlos Sainz talk about their F1 Sao Paulo GP start clash as Andreas Seidl adds on about it and why Daniel Ricciardo retired.

McLaren’s Norris had an unlucky start in the F1 Sao Paulo GP as he picked up a puncture by clashing when he tried to overtake his former teammate, Ferrari’s Sainz. The unfortunate incident set him to the back as he fought through to gain one point.

Post-race, Norris felt the move was on because he had a better start than Sainz. The Brit reckoned the Spaniard should have known that he will turn to the left into the corner but he didn’t give him enough space, leading to the touch and a puncture.

On the other side, Sainz defended himself when the blame was put on him following the collision with Norris in the first lap, but he did apologise to Norris for any toruble, even though he still believed he wasn’t wrong there and he did all he could to avoid.

Regarding the start itself, Sainz thought he did what he did on Saturday and so he wasn’t sure what happened on Sunday to get the wheel-spin. The Spaniard couldn’t finish better than sixth place behind his teammate Charles Leclerc.

Norris: “I have not see in it, so I can’t comment. I mean I need to look at it myself and and see but I was still the guy in the car whether or not it was my fault I’ll see in a bit but obviously it put us out the race pretty much, so we’re recovered well to get one point and one point is better than nothing. We could have had a much better day, so yeah frustrating. I don’t know what else I could have done right, it’s impossible to see, you have to look forward a lot of the time.

“I had a much better start, so I had to go to the right, he squeezed me and whether he could have given me a little bit more room or something like, not because he’s nice but just because you’re racing and at some point I got to come back on like my two wheels are off but I am still on the track, so yeah I went for it. It’s our chance to be ahead of the Ferraris, they’ve had a better pace all weekend, so if I wanted to go for it, I’m not just going to lift off and then let him waving back past right, so frustrating but there was a gap and I went for it. I can’t apologise for that part of it maybe the bit after.”

Sainz: “It all happened at the start and I lost a place to the cars I was fighting. To be honest, I need to look into it because it’s a very fine line between who turns into who. Obviously the corner goes left and I was holding the inside but I don’t think I deliberately did anything against him, if anything I felt like he turned in a bit early into Turn 1 and we tangled. But racing incident, sorry to him if I did something wrong, but to be honest I don’t think I did. I think I did yesterday’s same procedure, I did everything in the same way.

“But for some reason we still have to understand we had a lot of wheel spin, which is one of those things that I don’t understand very well because I think the procedure was the same. So there’s something to understand there, then from there on I had a very good pace, good tyre management, but for some reason here overtaking is very difficult. I’ve been very fast all weekend but it’s like this. I wanted to finish in the top five. I think the pace and everything was right to finish in the top five.

“I followed Charles all the race but with dirty air it was difficult to get closer than two seconds. That means we had a good pace but when you lose it all at the start for two weekends in a row, Mexico and here, when you’ve been faster all weekend, that leaves you a bad feeling. But it’s like this, we’ll keep pushing and improving. The important thing is that I’m fast, I’m improving every race and I’m giving myself good opportunities.”

The points from Leclerc and Sainz allowed Ferrari to have a 31.5 lead over McLaren after Norris could only manage a single point and Daniel Ricciardo was forced to retire. The Australian was looking good for a decent points haul on a one-stop strategy, but a power loss ended his weekend.

When asked McLaren’s Seidl – by FormulaRapida.net – about the clash between Sainz and Norris, the German felt the bad start from the Spaniard led to the incident. There was nothing much the Brit could have done and praised his recovery drive.

Regarding Ricciardo, Seidl revealed that the initial findings for a sudden loss of power was down to crack in the chassis side of the power unit installation. It didn’t seem to be a reliability issue of the engine but more will be known by Qatar.

On Norris/Sainz: “He had a great launch. And I think Carlos had quite a bad start. Lando had to go somewhere and on the outside, it’s very tight out there. I think he simply ran out of space and unfortunately touched the front wing of Carlos, causing the puncture. It was an unlucky racing incident. In terms of the recovery drive, the car was damaged. He lost quite a bit of downforce on the rear axle, some damage from the puncture I think. Then he did a great recovery drive.”

On Ricciardo: “We had a power loss on track. In the initial investigation, we found a technical issue, a crack on the chassis side of the power unit installation, which we need to now investigate. I can give you a better update next week in Qatar.”

The story was co-written by Oprah Sagal

Here’s the incident between Carlos Sainz and Lando Norris: https://www.formula1.com/en/latest/video.2021-sao-paulo-grand-prix-norris-and-sainz-clash-at-interlagos-start.1716424786061386734.html