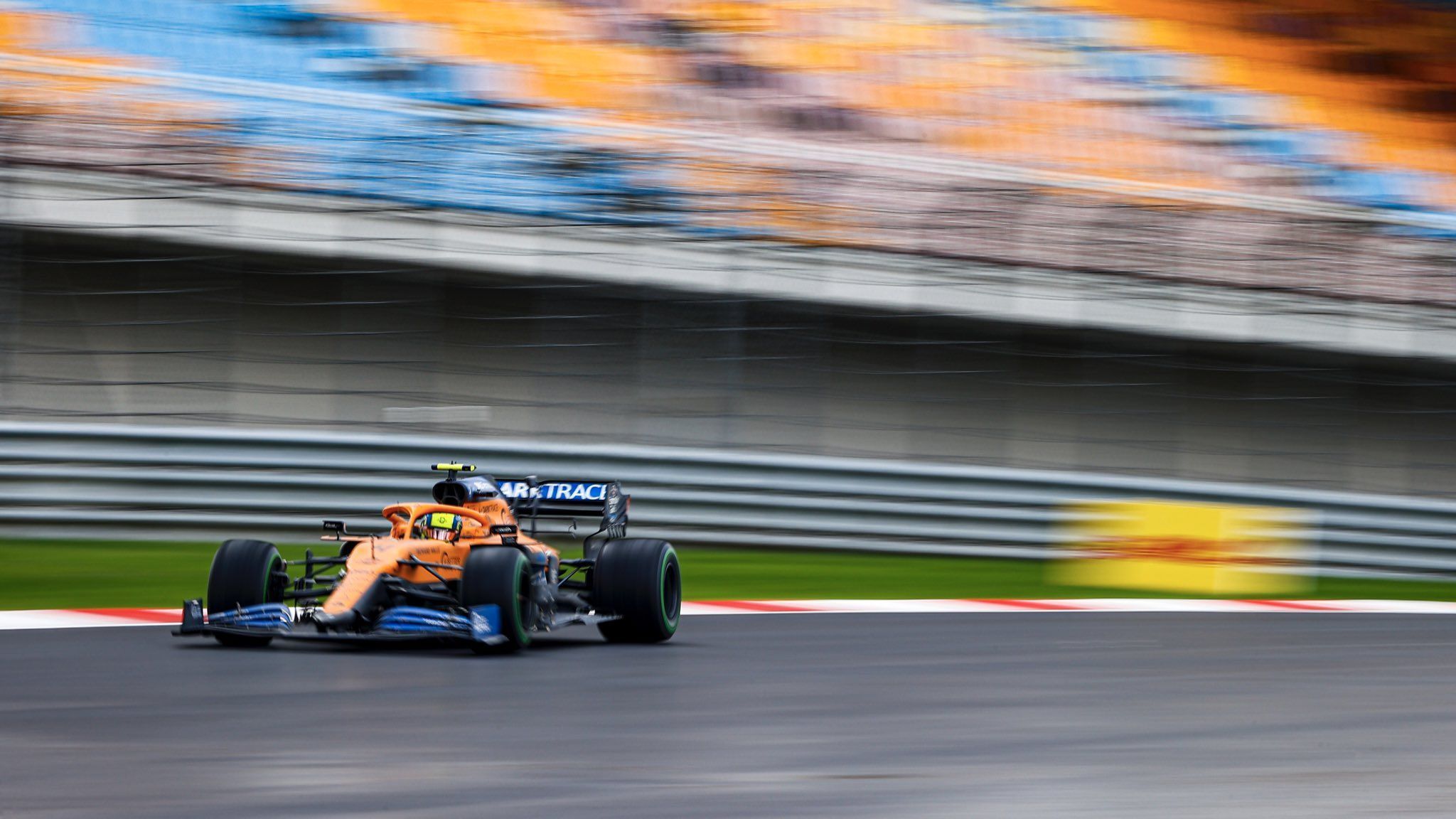 Lando Norris explains how the intermediate tyres worked in drying conditions in F1 Turkish GP as Carlos Sainz managed to switch on greatly to secure a Top 5 result.

The pace of Norris at the end of the F1 Turkish GP was to the bemusement of many, the McLaren driver setting the fastest lap of the race at the last possible opportunity, on lap 58 – and that too by a margin of over one second.

His lap time was doubly perplexing due to the intense wear on his intermediate set of tyres, which he had strapped on 22 laps prior. However, the Brit explained that it was precisely this wearing that enabled him to demonstrate the pace that he did.

As the water-dispersing tread wore away, the tyres became increasingly like those of the slick variety. This fact, combined with the soft compound of intermediates, made for a tyre coincidentally suited to the challenges of the track surface, he says.

“Slicks was never an option,” said Norris to TV media. “With this track surface, the intermediate tyre worked as a slick, and was almost better than a slick. The operating window is much lower, it’s a much softer tyre, so the grip we had at the end, although some corners were still wet, I did a 1m36s, and the last corner was completely wet – we were losing about 3-4 seconds.

“If you think about it, at some corners we were quicker on intermediates than we were on slicks which is very weird, but it’s just how weird this tarmac is.” When pressed further on the operation of these tyres, later dubbed by pundits ‘slicktermediates’, Norris continued:

“It’s interesting because I saw, I think Lewis and Perez did almost the whole race on the intermediates. We boxed twice, and there were some things you could do differently but it was also how you managed them, and that was our main focus: not killing them and over-pushing, but just using them in a proper way — in a good way — and that paid off.”

Despite his late-race pace, Norris would only manage eighth. From his starting position of 14th, though, it was a strong result – even if it began in more catastrophic fashion. “It ended well but didn’t start well,” he said. “[It was] a complete contrast. Possibly the worst start of my career, possibly the worst out of anyone’s career – ever.

“But every time we got some clear air and had a nice gap to the car ahead the car came alive, and we had really good pace. It’s just always difficult to put yourself in clean air and with a nice gap, so it was a bit of a patience game that we had to play throughout,” summed up Norris.

The result came after a particularly difficult Friday for the team, during which low grip compromised attempts to collect meaningful data. When asked on how the team managed to recover with minimal information to work from, Norris said: “The main thing was trying to understand what you had to do to try and be quick. The wet’s still like difficult to know, and Saturday in the wet we were like six seconds off. The thing is, as soon as you get three or four more degrees of tyre temperature, you start to gain a second a lap.

“A bit of it is downforce and tyre pressures and nailing everything — and that’s what Racing Point did. But at the same time we were not bad on Friday in FP2. We had a good understanding, we knew what we had to do, but when it became wet it kind of threw us off a bit and we couldn’t understand it, but we came back with a better understanding and we did a good job,” Norris said.

For his teammate Sainz, the Grand Prix was a more successful one, as the Spaniard managed an impressive fifth after starting P15. “In the laps to the grid I suddenly felt more grip, I felt that I’d found — together with my engineers — a couple of things to try on the way to the grid to get the tyres to temperature and get the tyres working,” he said.

“That immediately put me into a positive mindset going into the race and finally my wet weather skills can come into play because Saturday was actually a disaster,” Sainz confessed. “We were trying to do a combination of tyre management because the tyre was about to get destroyed and fall apart.

“We wanted to go fast but at the same time we wanted to get to the end. In the end we missed the podium by one or two seconds which would have tasted even better, but considering we started P15, to finish P5 we cannot be disappointed,” Sainz said, as the double points helped McLaren remain in fourth with 149 points to Racing Point’s 154.