Nissan has announced that it will withdraw its LMP1 entry from the 2016 FIA World Endurance Championship.

Nissan entered the LMP1 category in the 2015 season with an innovative, new, and bold concept, with the ambition to compete at the front of the field.

The team worked diligently to bring the vehicles up to the desired performance levels. However, the company concluded that the programme would not be able to reach its ambitions and decided to focus on developing its longer term racing strategies.

Nissan will continue its support of WEC through its various engine programmes. 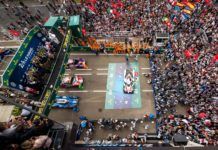