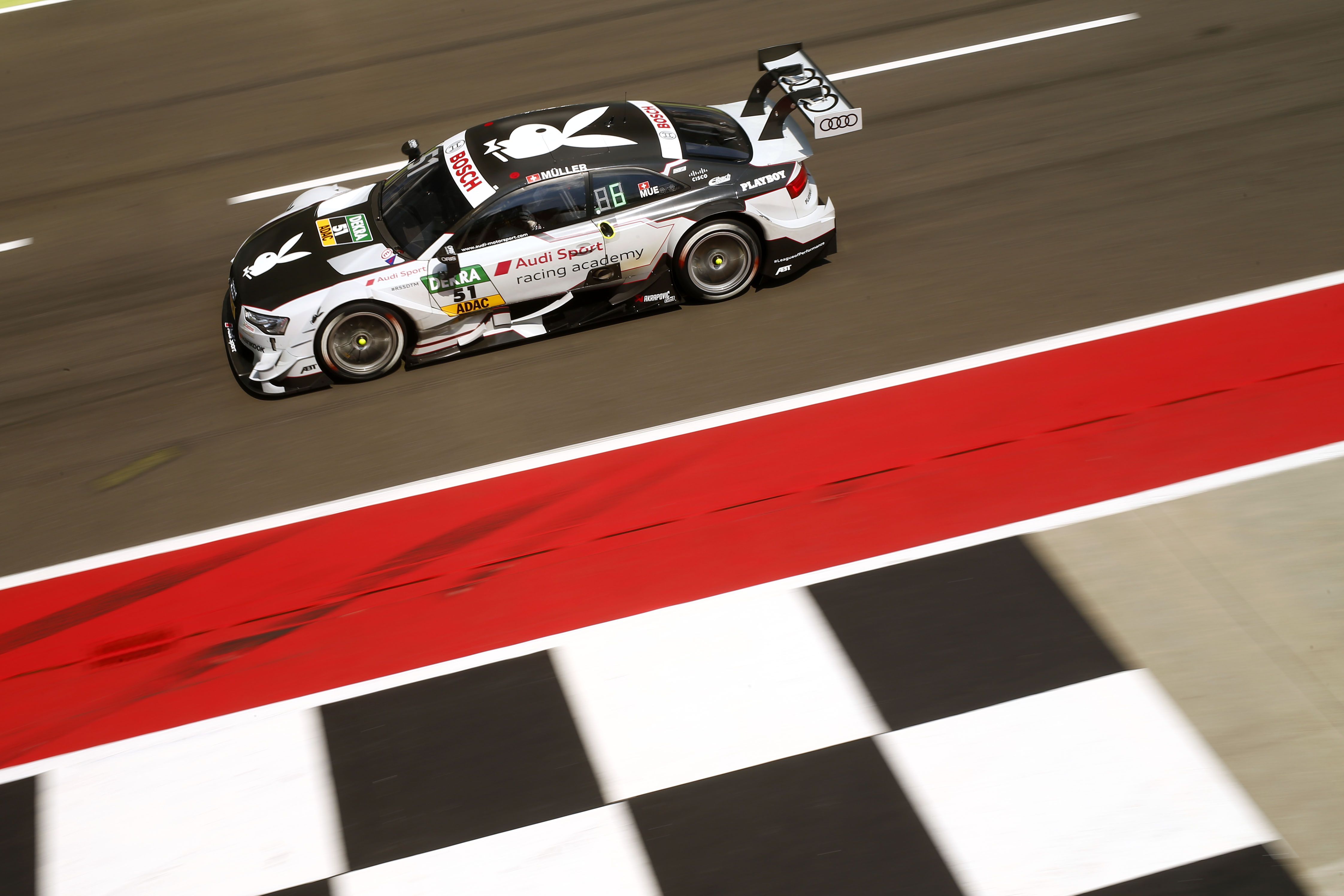 Nico Müller took his first win in DTM at the Norisring ahead of Tom Blomqvist and Maxime Martin.

Tom Blomqvist started on pole position ahead of Paul Di Resta and Nico Müller. Mattias Ekström was fastest in qualifying session but had to serve a grid penalty, making him start from P4.

At the start, Blomqvist had a good start and Müller managed to take advantage on Di Resta. Ekström hit Di Resta’s car and had to pit, so did Augusto Farfus who got some debris from Ekström’s car under his. The safety car had to be deployed to retrieve some debris on the racing line.

When the safety car went in, Blomqvist could build a gap to Müller, placing himself safe from DRS already. Timo Glock was put under investigation for overtaking under yellow flags before being cleared by race direction. Di Resta, unlike Müller, could not match the pace of the leader. Meanwhile, Adrien Tambay who had lost a place to Robert Wickens earlier in the race, managed to take P6 back.

Forty minutes into the race, Müller slowly started to close tot gap to Blomqvist. Di Resta, Maxime Martin and Timo Scheider were the first one to pits at lap 25, the three of them out last on track unsurprisingly. Without Di Resta ahead of him, Lucas Auer could go as fast as he wanted and was faster than the top 2, got the gap from 2.0s to 1.0s within two laps. Müller, pressed by Auer behind him, tried to overtake Blomqvist at the hair pin and went wide.

Tambay lost some time in his pitstop, one lap before Auer and Wickens pitted. Auer’s pitstop was extremely slow and got out behind Martin. Blomqvist pitted one lap later and could go out ahead of Di Resta. Tambay was hit by Da Costa at the hairpin, the Frenchman going again at the back of the field. Da Costa was handed a five-second penalty for this incident.

Ten laps after the other front runners, Müller pitted and got out just ahead of Blomqvist. Meanwhile, Wickens got a puncture after a contact with Mortara and needed to pit again. With twenty minutes to go, only three drivers had not pitted: Gary Paffet, Mike Rockenfeller and Esteban Ocon. Martin could overtake Di Resta for possible podium while Wickens was being shown the black and white flag for forcing Mortara out of the track.

With fifteen minutes to go, every driver had pitted and Müller was leading from Blomqvist and Martin. Because of a slight contact with Christian Vietoris, Da Costa spun. The Portuguese driver also had a contact with Jamie Green who got a puncture from that contact. Maximilian Götz also had a moment in the hairpin and had a 360° spun while Green and Paffet retired. Vietoris also got a drive through for the contact with Da Costa.

Da Costa, with a damaged car, spun once again and had another contact, this time with Daniel Juncadella, putting a lot of debris on track and having the safety car deployed with seven minutes to go. Da Costa retired as well of the race after that last incident.

The safety car went in with four minutes left on the clock. Müller got away from Blomqvist who had pressure from Martin behind him. Di Resta being the cork on the bottle, Auer tried everything to get passed him. With one minute to go, there was a contact between Timo Scheider and Rockenfeller, Tambay being a collateral damage of the incident.

Marco Wittmann takes the lead of the championship for two points to Edoardo Mortara, Paul Di Resta is third.