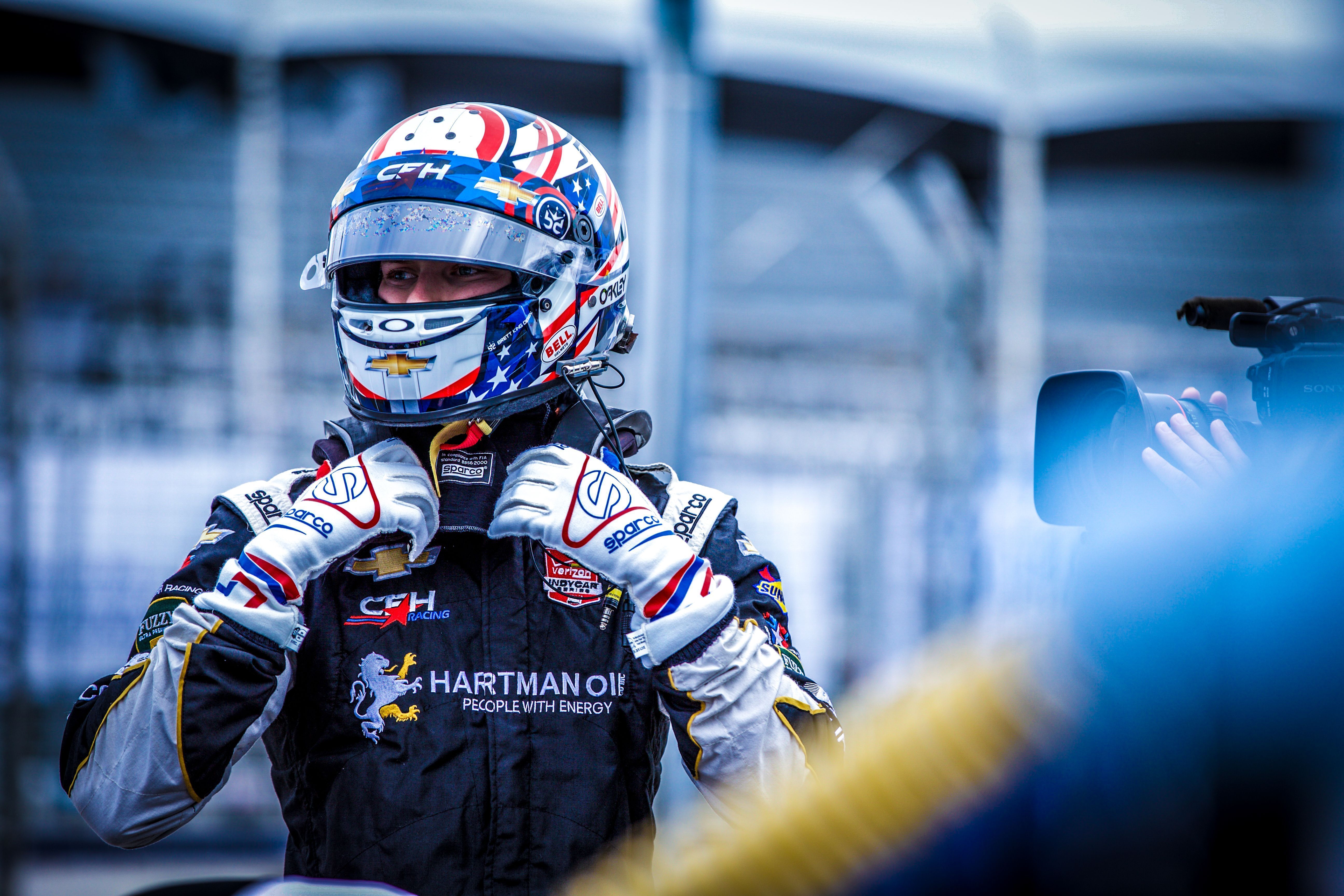 Josef Newgarden earned his second win of the season in the IndyCar Series in Toronto street circuit. The American holds a perfect day thanks to the strategy that has allowed him to place the two drivers of CFH Racing in the first two podium spots with Lucas Filippi. Castroneves ends strategily third. Low key role of championship leader Montoya, who finished seventh.

The rain was leading another year in the IndyCar Honda Grand Prix of Toronto. A shower that made commissioners decide to start in a row, not two as usual. And of course all wet tires.

Power took adventage of a small skid distance from Pagenaud to make a clean start, with little overtaking. Takuma Sato tried but was touched by Castroneves. Coletti also proved Vautier and suffering a touch.

The rain kept falling, and the track was beginning to dry quickly. Also there began to appear different paths. But who had still had trouble finding the braking point was Connor Daly (Peterson Schmidt Motorsport).

In the seventh lap Titans Wars began to take fire, Scott Dixon (Chip Ganassi Racing) exceeded Montoya (Team Penske) to be placed third, but the championship leader was forced to get off track because he could not complete the drawn. The Colombian returned to the race in eighth place.

Meanwhile, Marco Andretti (Andretti Autosport) as in Detroit, was the first to stop in boxes and put on dry tires with only 9 laps of the race. Montoya made the same maneuver seeing how Andretti began to ride fast. Immediately the other drivers were forced to stop.

After completing all the pit stops, Power was still leading ahead of Pagenaud, Dixon, Bourdais and Filippi. With this situation, Castroneves (Team Penske) tumbled seventh, trying to overtake Takuma Sato (AJ Foyt Enterprises) without success, the Brazilian driver almost hits the wall.

In head, Pagenaud caught Will Power to fight for the lead of the race around the turn 25. The French tried to outdo Power on the outside but the Australian always managed to defend very well the first place. Behind James Jakes (Peterson Schmidt Motorsports) came to boxes to put the British prime tires but crashed into the tires protection in Turn 5, causing the first pace car for the race.

Most drivers took the opportunity to stop with the race neutralized. Within the pit stop, Dixon struggled with Bourdais and ended with the French ahead of the New Zealander. Castroneves went on to lead the race ahead of Newgarden (CFH Racing) and Muñoz (Andretti Autosport) already had stopped in box around before the pace car came out on track.

The green flag on lap 34 again, and Castroneves who had not stopped in boxes, took the opportunity to escape from the rest of the rivals. 5 laps later, Charlie Kimball (Chip Ganassi Racing) punctured the tire that forced him to stop and box again. Also with problems was Stefano Coletti (KV Racing Technology) who had crashed in Turn 5, breaking the rear suspension and getting the second pace car out due to the dust in the path. The Monegasque left the race.

A bad pace car for Castroneves, losing all the advantage he had with Newgarden who was going to lead the race. Castroneves got down to sixteenth place. The green flag on lap 47, Pagenaud trying to overcome Power but the maneuver went wrong and it was he who had just lost 4 positions. Who better advantage of the situation took was Bourdais getting rid of the two Penske to climb to third place.

The window of the third stop was opened by Graham Rahal (Rahal Letterman Lanigan Racing) coming on lap 56, putting the hard tire to roll till the end. Rahal stopped before anyone else to beat Simon Pagenaud. In the pit stops, Bourdais lost his position with Power. The Australian fortunately was not hit by Montoya who stopped a few laps later and managed to move positions to stand behind the series champion. It was also a helpful pit stop for Filippi (CFH Racing) getting Newgarden stand behind his teammate at the exit of pit lane.

Completed all the pit stops, Newgarden kept the lead followed by Filippi, Castroneves rolling on soft tires in third, great comeback thanks to the strategy marked by Roger Penske. The Brazilian was the first of the Penskes.

Newgarden was the virtual leader, and Gonzalez (Dale Coyne Racing) who had not yet stopped, was pressured by Filippi, because the American did not advance the Venezuelan that was going slow. The situation was complicated by the CFH Racing team as Castroneves with better tires was located just behind the Indianapolis team. Gonzalez finally stopped with 14 laps to go, leaving the first 4 together to fight for victory, the match Penske versus CFH Racing opened in Toronto.

CFH Racing finally kept the lead and got the first double team in the American series. Castroneves completed the podium as the best Penske, in a top 8 100% of Chevrolet. Not a so good job today by the leader of the championship, Juan Pablo Montoya, who finished seventh.

Montoya retains the lead but Power, Dixon and Castroneves cut distances with the Colombian with just 6 races to close the championship and in the final race at Sonoma, double points.