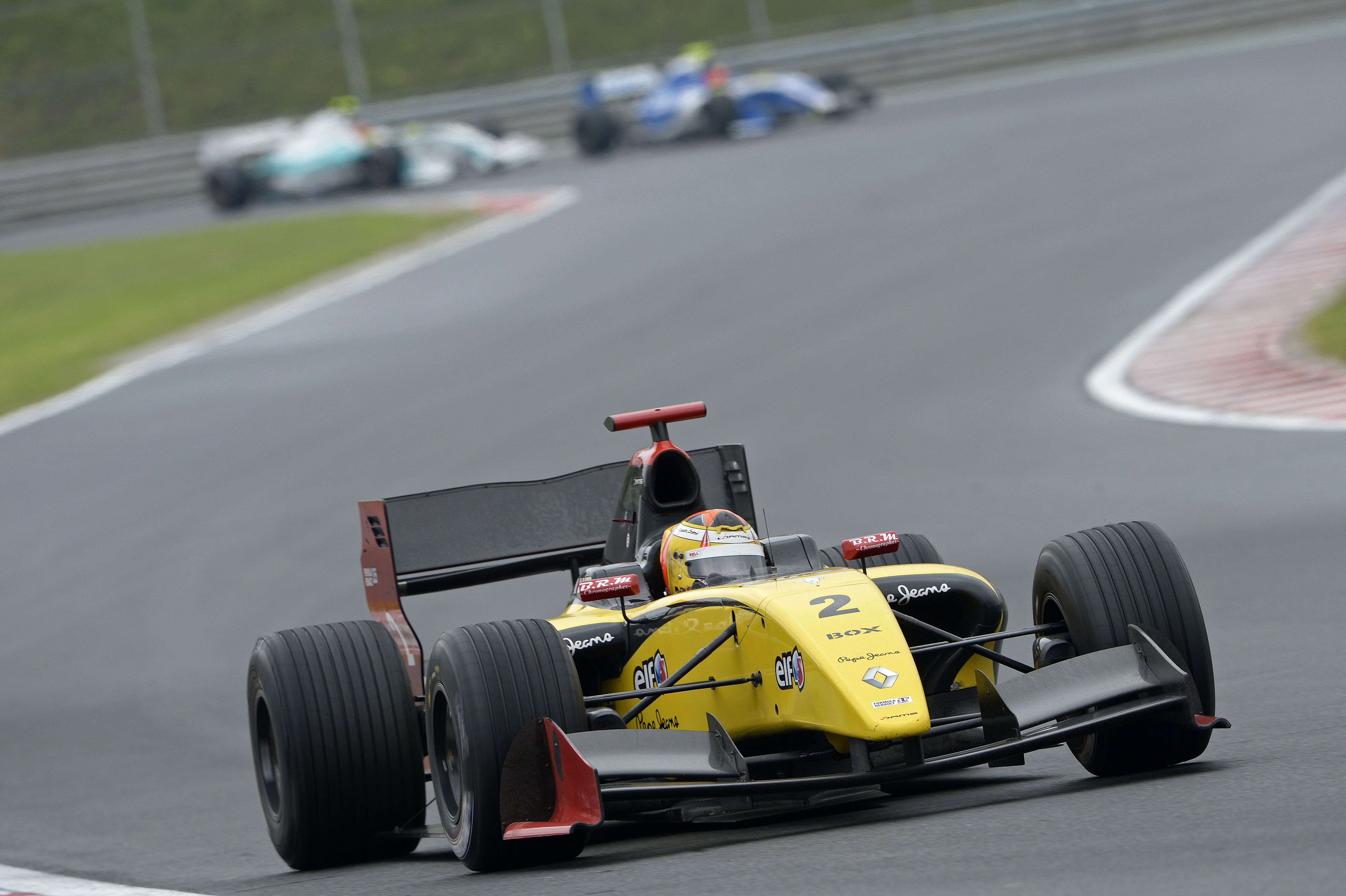 Winner at Monaco, Norman Nato (DAMS) did it again at the Hungaroring. Sunday, the French driver put in a perfect start to get the better of pole man Roberto Merhi (Zeta Corse) and went on to take his second victory in the Formula Renault 3.5 Series. Red Bull Junior Team driver, Pierre Gasly (Arden Motorsport) completed the podium. With two meetings left in the season, the championship is anything but settled because Carlos Sainz (DAMS), sixth in the Sunday race, saw his advantage reduced to 16 points.

Battling for the lead in the general classification, Roberto Merhi dominated the DAMS duo of Carlos Sainz and Norman Nato in qualifying with a best lap of 1:37.400. Oliver Rowland (Fortec Motorsports) and the Pons Racing pair of Oscar Tunjo and Meindert van Buuren completed the top six.

When the lights went out, Norman Nato put in a perfect start to take the lead of the race ahead of Roberto Merhi, Oliver Rowland, Meindert van Buuren and Carlos Sainz. At the first corner, Sergey Sirotkin (Fortec Motorsports) missed his breaking point, provoking an accident that resulted in the retirement of both Oscar Tunjo and William Buller (Arden Motorsport).

Following the intervention of the safety car, Roberto Merhi tried without success to overtake Norman Nato. Despite his pit stop one lap earlier than the DAMS driver, for a mandatory tyre change, Roberto Merhi failed to pass the Frenchman. Pierre Gasly made the most of his stop as he managed to overtake Carlos Sainz after exiting the pits, then Oliver Rowland on lap 13 to move into third place.

In the final laps, Norman Nato maintained his advantage and collected his second triumph of the season. Roberto Merhi and Pierre Gasly joined him on the podium. Oliver Rowland was next in fourth place ahead of Meindert van Buuren and Carlos Sainz, who was under threat from Matthieu Vaxiviere (Lotus) in the final laps of the race. Jazeman Jaafar (ISR), Marco Sørensen (Tech 1 Racing) and Will Stevens (Strakka Racing) rounded out the top ten.

Norman Nato: ”Yesterday, I was disappointed because after a good qualifying and good pace on the damp surface, we got some problems. Today, qualifying was good although Roberto was the quickest. The key was the start because it is hard to overtake on this track. I am thrilled with this win because I try to do my best in each race. I am ready to push and rock this way for more successes.”

Roberto Merhi: ”It was very tricky during qualifying because the track was drying and the good line changed on each lap. Starting from pole, being second wasn’t what we wanted, but Norman made a great start. Then, we nearly touched, then I was able to close in before ruining my tyres. So, I economized my tyres and the DRS just in case but he didn’t make a single mistake.”

Pierre Gasly: ”The car was fantastic today. I was disappointed in qualifying, because the pace in dry conditions was excellent and I had a great fight with Sainz and Rowland. I tried to catch the leading duo, but I knew that at some point that tyre degradation and the difficulty to overtake would be a factor. I hope that a win will come soon, we are very close and we will work even harder to make it happen.”