Felipe Nasr has been confirmed to replace Maximilian Gunther at GEOX Dragon from the Mexican round of the FIA Formula E Championship.

Having graduated to a Formula E race seat in 2018/19 after serving as reserve in 2017/18 season, Gunther will make way for ex-F1 driver Nasr at GEOX Dragon as the Brazilian racer will make his electric single-seater series debut in Mexico alongside Jose Maria Lopez.

Nasr was in line to drive during the Marrakesh rookie test but some contractual issues forced him to miss the event even though he was present at the venue. Following his departure from F1, Nasr has been racing in sportscar – most notably in IMSA.

He has a race seat with Whelen Engineering Racing Cadillac for the 2019 season which he will dovetail now with Formula E. There is one clash, however, with the WeatherTech Championship having a race on April 13 in Long Beach and Formula E in Rome.

“He would be an invaluable asset to the evolving Geox Dragon organization. We would be thrilled to add a driver of his calibre to the team.” Even though Gunther has been dropped from the race seat, the German will remain part of the team’s structure.

In fact, Gunther has stated that he was aware of the condition that he will share his race seat with another driver in the season. It remains to be seen if or when Gunther races in the car next – though Rome could be a possibility.

“It was clear from the beginning that I would share the season at Geox Dragon with another driver,” said the 21-year-old, who has had a rocky start to his Formula E career. “I know that I will be racing for Geox Dragon again this season.

“Until then, I will continue to do the simulator work and be a test and replacement driver for the team. I had a lot of fun in Santiago de Chile, where I had a great race after my super qualifying until my retirement and I am looking forward to returning to the Penske EV-3 soon.” 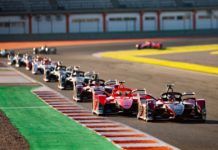