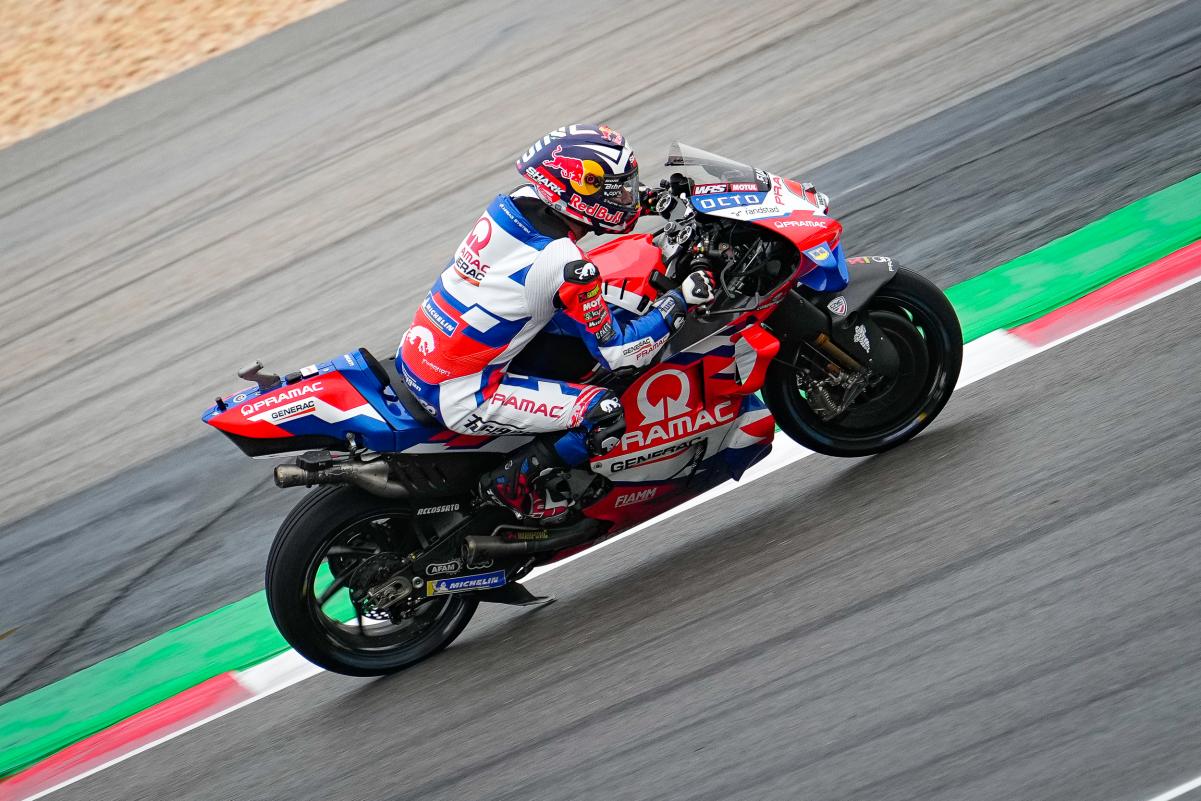 It was tricky start to first part of MotoGP qualifying in Portuguese GP as riders had to decide whether to go on the slick tyres or stick to wet. Tech 3 KTM’s Remy Gardner had a high side on the dry weather tyres with Ducati’s Francesco Bagnaia following suit.

It was mixed strategy but towards the end, the slick tyres started to come alive. It eventually helped LCR’s Alex Marquez (1m46.316s) through to Q2 after he switched to dry tyres with Marini making it in too with a 1m47.199s lap.

Despite the late push, Martin missed out in third to start 13th in MotoGP Potuguese GP, with Aprilia’s Maverick Vinales 14th from di Ginannantonio, RNF Yamaha’s Andrea Dovizioso and Nakagami in 17th as points leader Enea Bastianini was only 18th.

The Gresini rider had a late high side to crash out, as Yamaha’s Franco Morbidelli was 19th from Gardner who managed to return after his crash unlike Bagnaia who couldn’t set any time. Aprilia wildcard Lorenzo Savadori was 21st from RNF’s Darryn Binder.

Suzuki’s Rins was only 23rd in the end after his lap was cancelled as Tech 3’s Raul Fernandez ended up 24th after his high side on the slick tyres.

The second part in MotoGP qualifying in Portuguese GP saw everyone use the slick tyres as the times at the front continued to change for multiple riders. Even the lead changed hands multiple times along with the front row order with many having a go at it.

The fight for pole went until the final lap after the chequered flag, as Ducati’s Jack Miller went from first to fourth after late improvements from three riders. It would have been more damage if not for the lap cancellation for Marc Marquez and Fabio Quartararo.

The crash for Honda’s Pol Espargaro caused yellow flags which hurt his teammate Marquez and also Yamaha’s Quartararo – both of whom took top spot from the laps they did. With the flags taken away, three MotoGP riders were on-course to improve their times.

Suzuki’s Joan Mir went fastest with a 1m42.198s lap but Pramac’s Johann Zarco set a 1m42.003s lap to take MotoGP pole in Portuguese GP as Aprilia’s Aleix Espargaro ended up third with a 1m42.235s lap after a late improvement from his side.

Miller was fourth from Quartararo, with VR46’s Marco Bezzecchi in sixth from LCR’s Marquez who crashed after chequered flag. Marini ended up eighth from Honda’s Marquez who dropped to ninth from Espargaro and KTM’s Miguel Oliveira and Brad Binder.