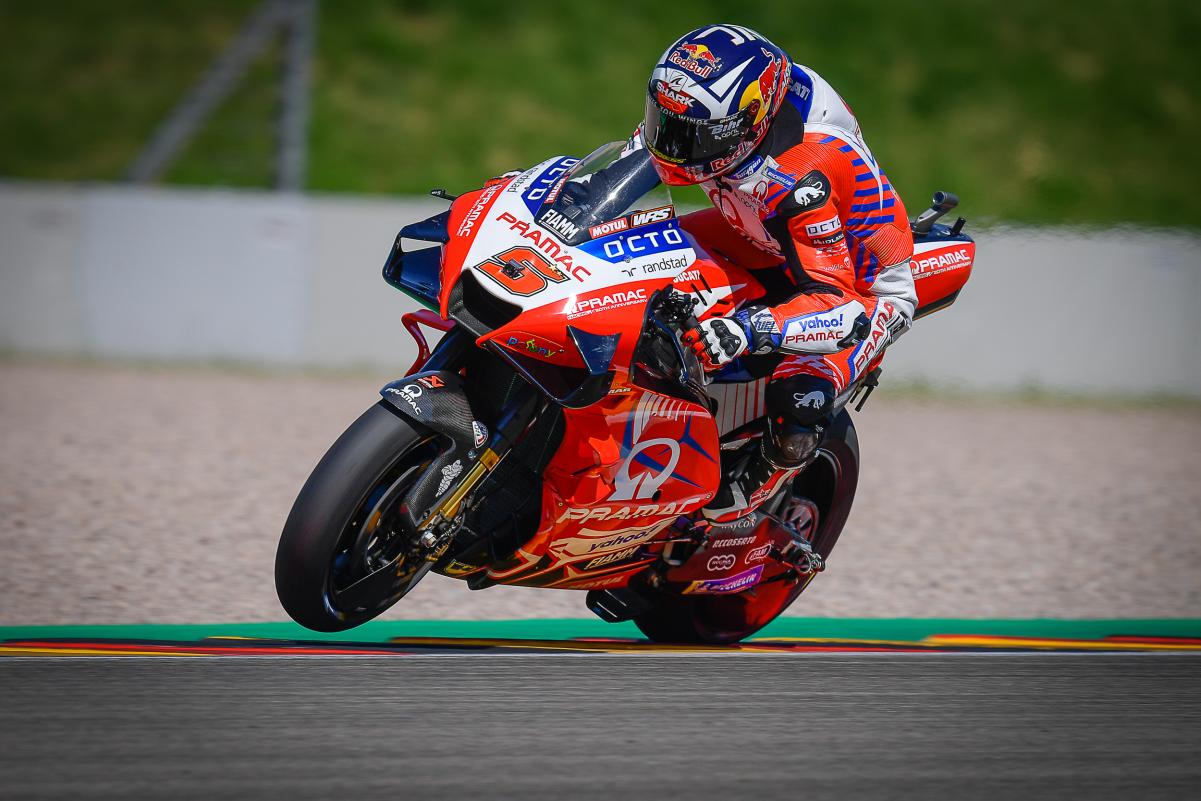 It was a delayed start to MotoGP German GP qualifying due to technical issues after the end of the FP4 session. The first run saw the returning Alex Rins head the standings in his Suzuki, with Honda’s Pol Esparagro in second from KTM’s Brad Binder.

As things started to heat up, Aprilia’s Lorenzo Savadori had a crash but he returned on the second bike. A late crash for Petronas SRT Yamaha’s Franco Morbidelli, not only ruined his run but also few others with yellow flags on display in the final corner.

There was another yellow for a crash for Tech 3 KTM’s Iker Lecuona. The biggest one to lose out there was Yamaha’s Maverick Vinales, who was only 21st. At the front, it was getting close for Top 2 but Rins had it under control with a 1m20.644s lap.

Espargaro was second with a 1m20.700s, as KTM’s Binder just missed out in third, to start 13th. The two Avintia Ducati riders slotted in 14th and 15th, with Luca Marini leading Enea Bastianini, while Petronas SRT’s Valentino Rossi only managed 16th in the end.

He was the top Yamaha in Q1, leaving only Fabio Quartararo as the lone on the bike in Q2. While Rins managed to get into Q2, his Suzuki teammate Joan Mir was only 17th from Morbidelli, as Tech 3’s Danilo Petrucci led teammate Lecuona from Vinales and Savadori.

The second part in MotoGP German GP qualifying started on time, with P Espargaro keeping it late for his first run. It was Yamaha’s Quartararo on top from Honda’s Marc Marquez and Pramac Ducati’s Jorge Martin, even though, the Frenchman’s first lap was deleted.

Replays showed a moment involving LCR Honda’s Alex Marquez, Aprilia’s Aleix Espargaro and Ducati’s Jack Miller, which ruined the former’s charge. The mayhem continued at the front with everyone looking for a tow, leaving Quartararo frustrated as well.

As Quartararo went quickest still, Pramac’s Johann Zarco took the top spot from him and was going even quicker, when he crashed out at Turn 4. As riders started on their final lap, there was yellow flags for LCR Honda’s Takaaki Nakagami’s crash at Turn 1.

The dramatic end saw Zarco end Quartararo’s streak to take MotoGP pole in German GP with a 1m20.236s lap, as he led fellow Frenchman, while A Espargaro quietly did the job to end up third in the order, to secure a front row start for Sunday.

Miller went for a late second run and almost looked like to snatch the front row from A Espargaro, but for a small moment at the end of his lap, which kept him fourth, from Marquez, as KTM’s Miguel Oliveira was sixth ahead of Martin and P Espargaro.

Despite his crash, Nakagami was ninth from Ducati’s Francesco Bagnaia, Suzuki’s Rins and LCR’s A Marquez to round out the 12 runners.