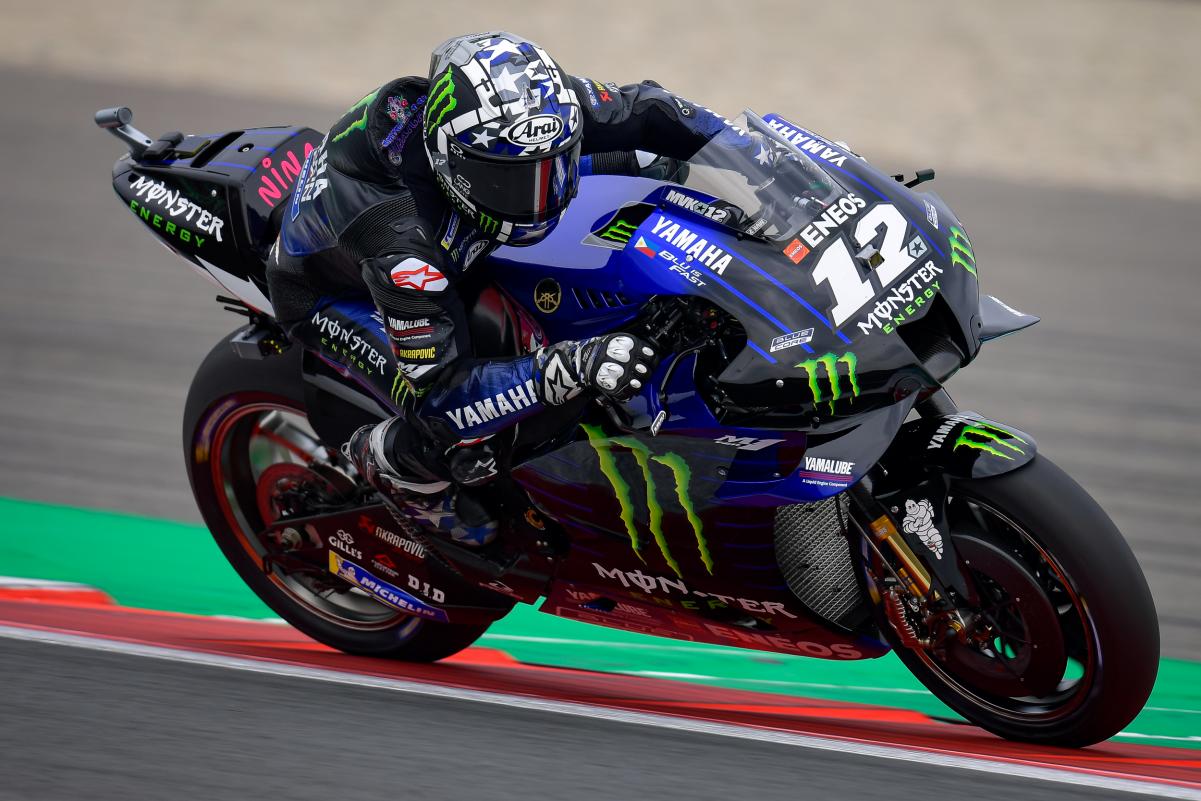 It was a Yamaha 1-2 in MotoGP qualifying with Maverick Vinales beating Fabio Quartararo to Dutch GP pole from Ducati’s Francesco Bagnaia.

It was cloudy in first part of MotoGP Dutch GP qualifying, as Ducati’s Francesco Bagnaia led the way with a 1m32.657s lap after the first run from Pramac Ducati’s Jorge Martin in the Top 2. The latter’s teammate Johann Zarco did not set a lap time, though.

He seemed to have some trouble with his first bike and decided to switch to the second one for his final and only run. The Tech 3 KTM riders did well with Iker Lecuona and Danilo Petrucci in third and fourth ahead of their final runs.

There was traffic mayhem on the second run, with everyone looking for a tow. It seemed like over with Bagnaia and Lecuona in the Top 2, but the final lap from Zarco out of nowhere put him on top with a 1m32.541s ahead of Bagnaia (1m32.657s).

It was heartbreak for Lecuona who was pushed to third to start from 13th, with Martin 14th after a mistake on his final lap. Aprilia’s Lorenzo Savadori was 15th from LCR Honda’s Alex Marquez as Avintia Ducati’s Luca Marini ended up 17th.

They all managed to pip Petrucci, who at one moment was second, before his best lap was cancelled. He led Avintia’s Enea Bastianini, as a crash for Honda’s Marc Marquez left him only 20th from KTM’s Brad Binder and Petronas SRT’s Garett Gerloff.

The second part in MotoGP Dutch GP qualifying saw Yamaha’s Fabio Quartararo continue his charge as he had provisional pole with his own lap record breaking 1m31.922s lap, as he led teammate Maverick Vinales, who seemed to find some of his mojo back.

After making it into Q2, Pramac’s Zarco was third from Ducati’s Jack Miller. The second run changed hands at the top after Vinales went quicker than his teammate to set a 1m31.814s and despite an improvement from Quartararo, he was still down.

A mistake from Quartararo (1m31.855s) helped Vinales to retain top spot and secure MotoGP pole in Dutch GP, coming off from a disastrous German GP. Eventually, it was only the two Yamaha riders under 1m31s bracket, to end up a 1-2.

The fight for third was on as a late quick lap from Ducati’s Francesco Bagnaia helped him to end up third on the front row, pushing LCR Honda’s Takaaki Nakagami to fourth from Zarco and KTM’s Miguel Oliveira, with Suzuki’s Alex Rins in seventh.

The Spaniard had a crash at Turn 8 after the chequered flag, as Miller was only eighth from Aprilia’s Aleix Espargaro, Suzuki’s Joan Mir, Honda’s Pol Espargaro and Petronas SRT’s Valentino Rossi, to finish the Top 12 runners.

Maverick Viñales pips @FabioQ20 to pole position at Assen! 🔝@PeccoBagnaia will be ready to pounce from the outside of the front row! 🙌#DutchGP 🇳🇱 pic.twitter.com/laYOeCjbIp