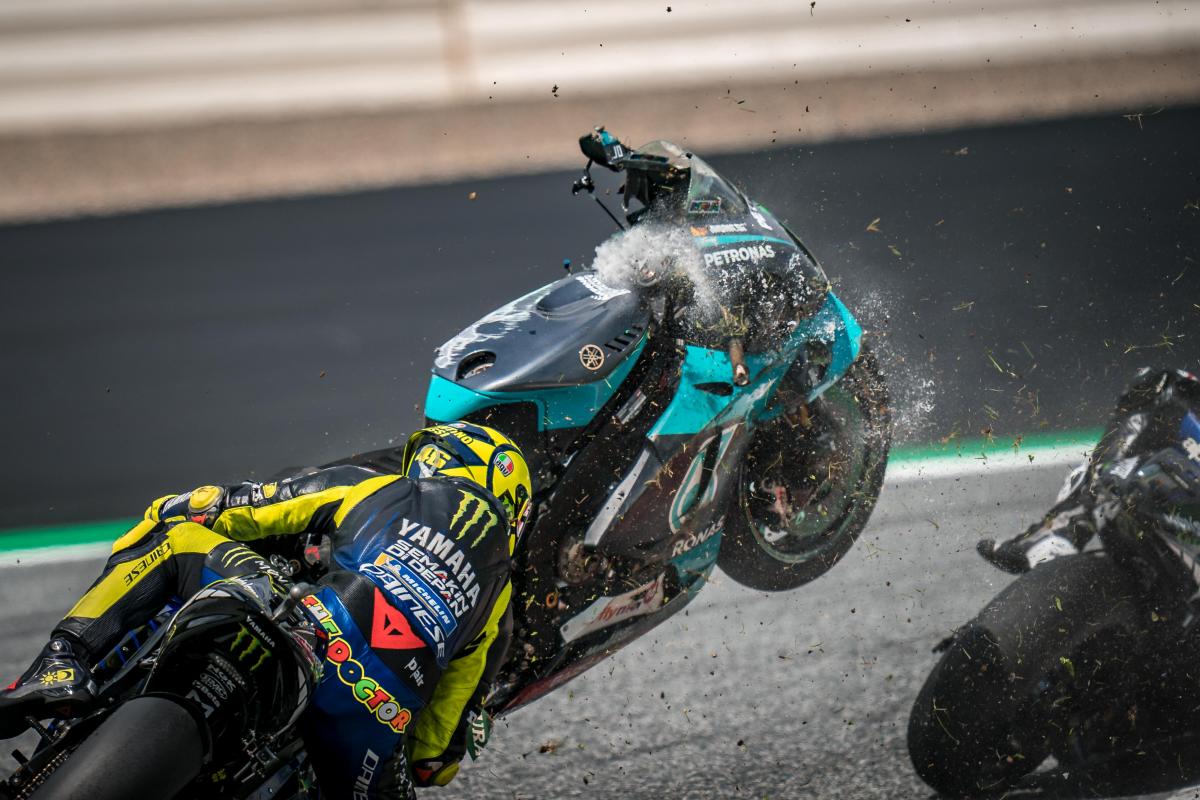 After repeated incidents, the FIM MotoGP stewards have announced that they will conduct hearings on the dramas with numerous drivers.

MotoGP has announced that the FIM team of Stewards Bill Cumbow, Freddie Spencer and Ralph Bohnhorst will summon multiple riders over the incidents from Czech GP and also the Austrian GP in the coming weekend of the Styrian GP.

They already met with Ducati’s Danilo Petrucci and Aprilia’s Aleix Espargaro after their qualifying incident during Austrian GP which left the Italian enraged by the action of the Spaniard, when he slotted himself in front of the rider on a fast lap.

During the MotoGP race, though, a major incident involving Avintia Ducati’s Johann Zarco and Petronas SRT’s Franco Morbidelli brought the grand prix to a standstill as their bikes flew past Yamaha’s Maverick Vinales and Valentino Rossi.

It was enough to shake them a bit with the latter very vocal about it as it involved Morbidelli. It was deemed as a racing incident as Rossi conversed with Zarco post-race. The FIM Stewards will meet the Petronas and Avintia riders on Thursday, August 20.

They will also meet KTM’s Pol Espargaro and Tech 3 KTM’s Miguel Oliviera after their incident which left the Portuguese hugely distraught as he smashed into his garage. They will educate the MotoGP riders and apply sanctions if deemed required.

Here’s the full statement from MotoGP:

“Following several incidents both on and off track during the last two Grands Prix in the Czech Republic and Austria, the FIM MotoGP Stewards began to summon the riders involved in order to better understand the circumstances of each situation, in addition to analysing video footage of the incidents in question.

“Since it was not possible to organise all the hearings at the end of the Austrian GP MotoGP race on Sunday the 16th of August, the members of the FIM MotoGP Stewards panel, composed of Bill Cumbow, Freddie Spencer and Ralph Bohnhorst, will continue to summon the riders concerned as soon as possible ahead of the BMW M Grand Prix of Styria.

“The FIM’s mission is to support riders and contribute to their safety and education, as well as to apply any sanctions required by the FIM Regulations. A press release will be issued after the hearings.”

All of the riders have spoke about the various incidents where Zarco says he didn’t brake on purpose on the straight which caught Morbidelli out, where the only outcome was a crash but the Italian section is not happy that the Frenchman hasn’t been penalised.

“The images from my camera are the ones that scare me the most, because from here you can understand the speed with which Franco’s bike crossed the track right in front of me,” wrote Rossi on his Instagram earlier in the day.

“I went back to the pits I was already shocked enough to have seen Zarco’s bike literally fly over Maverick’s head. Miraculously nobody got hurt but I hope this incident makes everyone think, especially us riders like that.

“But it still remains a serious error of assessment, which a MotoGP rider cannot afford, especially in a braking from 310 km / h, moving quickly to the right and braking “in the face” of Franco, he did not give up the place to slow down.

“So Morbidelli couldn’t do anything but hit him at full speed. or dangerous sport, and our own safety and that of our opponents is much more important than gaining a position,” summed up Rossi. It was similar sentiments just after the grand prix as well.

On the side of Zarco, the Frenchman is to have a surgery on Wednesday in Italy for a small fracture on the scaphoid of his right hand due to pain on Monday. He will return on Thursday and hope to compete during the weekend depending the pain.

Meanwhile, Avintia revealed some telemetry information on the incident, where they stated that he actually braked later and so he didn’t do it on purpose. “After the comments and statements that have appeared, Johann Zarco is very affected since at no time has he intended to carry out a maneuver that would endanger any other opponent.

“However, the French Esponsorama Racing rider wanted to apologize and clarify with each and every one of the riders involved. “Despite this, after the dispute of the Austrian Grand Prix, telemetry has shown that, at the time of the accident, Zarco brakes later in Turn 3 than in the rest of the laps of the race, so from this analysis it follows that at no time is his intention to impair Morbidelli’s braking and close his line,” it read as.

On Sunday, Morbidelli said: “I’m a little bit sore, but everything is fine. Looking at footage of the crash it is good to be able to walk away like this. I consider myself to be very lucky. It was a strange crash because Johann [Zarco] overtook me on the straight and then changed his line under braking to go very wide. With the changed line and the slipstream there was just nowhere for me to go, it was impossible for me to avoid him. Thankfully we are both alright.”

Here’s what Johann Zarco said after the incident: https://www.motogp.com/en/videos/2020/08/16/zarco-explains-racing-incident-with-morbidelli/339706

Here’s what happened with Pol Espargaro and Miguel Oliveira: https://www.motogp.com/en/videos/2020/08/16/what-happened-between-espargaro-and-oliveira-in-ktm-clash/339781

Here’s some close photos from the incident: https://www.motogp.com/en/news/2020/08/17/photo-sequence-the-huge-austrian-grand-prix-crash/339988