MotoGP has released a 19-round provisional calendar for 2021 season despite COVID-19 threat as Indonesia, Portugal and Russia are in reserve.

A 19-race provisional calendar has been released by MotoGP for the 2021 season with a 20th still to be firmed, while three has been named as reserve amid COVID-19 threat. It is a full season calendar with almost all of the original 2020 races returning.

The 2021 MotoGP season is slated to start on March 28 in Qatar with Argentina (April 11) and Americas (April 18) being back-to-back then after. The circus will move to Europe then with Jerez (Spain) hosting the season’s fourth round on May 6.

France is next on May 16, while Mugello (Italy) will take place on May 30, with Barcelona (Spain, June 6), Germany (June 20) and Netherlands (June 27) happening in June. The first-ever Finland race is slated for July 11 but the race after it is under TBD.

Ausria is next after the TBD on August 15 with Great Britain on August 29, followed by Aragon (Spain, September 12) and Misano (Italy, September 19) to end the European leg of the 2021 MotoGP season, before moving onto Asia-Pacific region.

It will start with Japan on October 3 at Twin-Ring Motegi, as Thailand comes next on October 10 with Australia on October 24 and Malaysia on October 31. The 2021 MotoGP season is scheduled to end in Valencia (Spain) on November 14.

Among the final listed raced, Finland is only one under ‘Subjected to Circuit Homologation’. Apart from the 19 races provisionally confirmed with a 20th yet to be named, MotoGP has a reserve list of Indonesia, Portugal (Algarve) and Russia (Igora Drive Circuit). 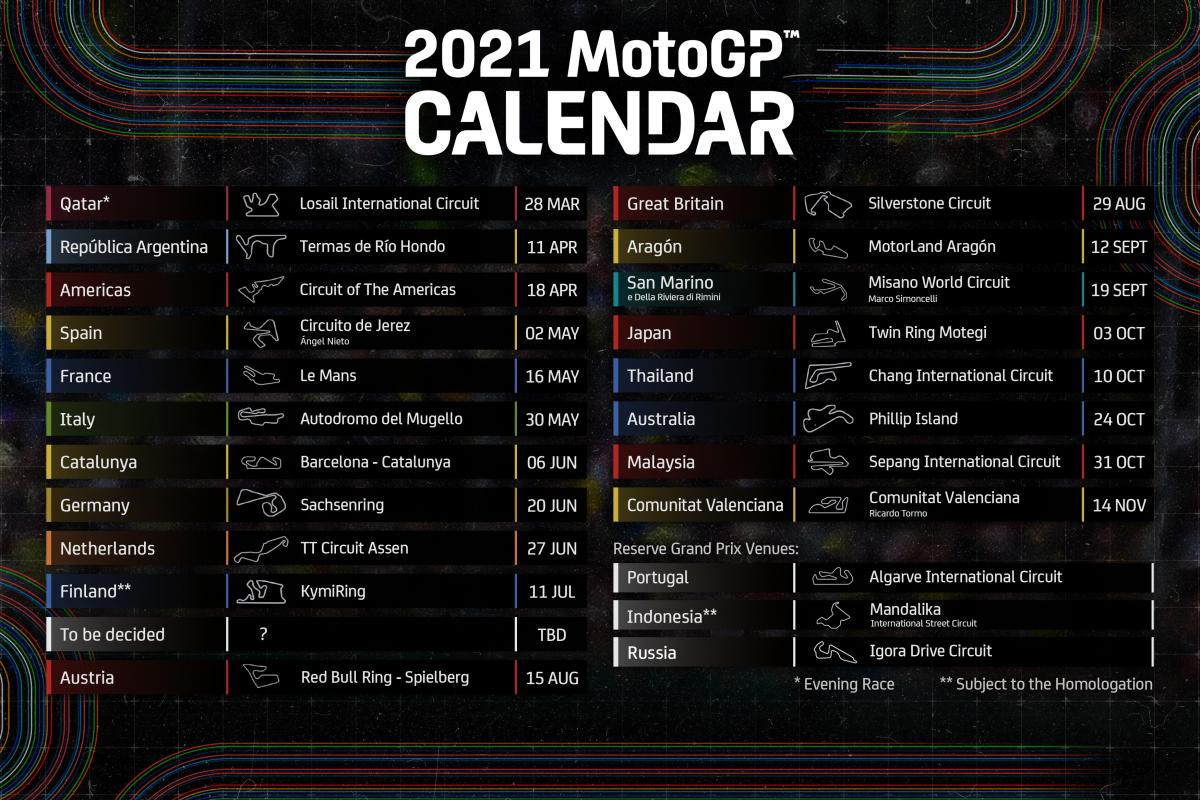 Here’s the penalty incurred by Yamaha and Petronas SRT

Here’s on Valentino Rossi for this weekend’s Valencia race