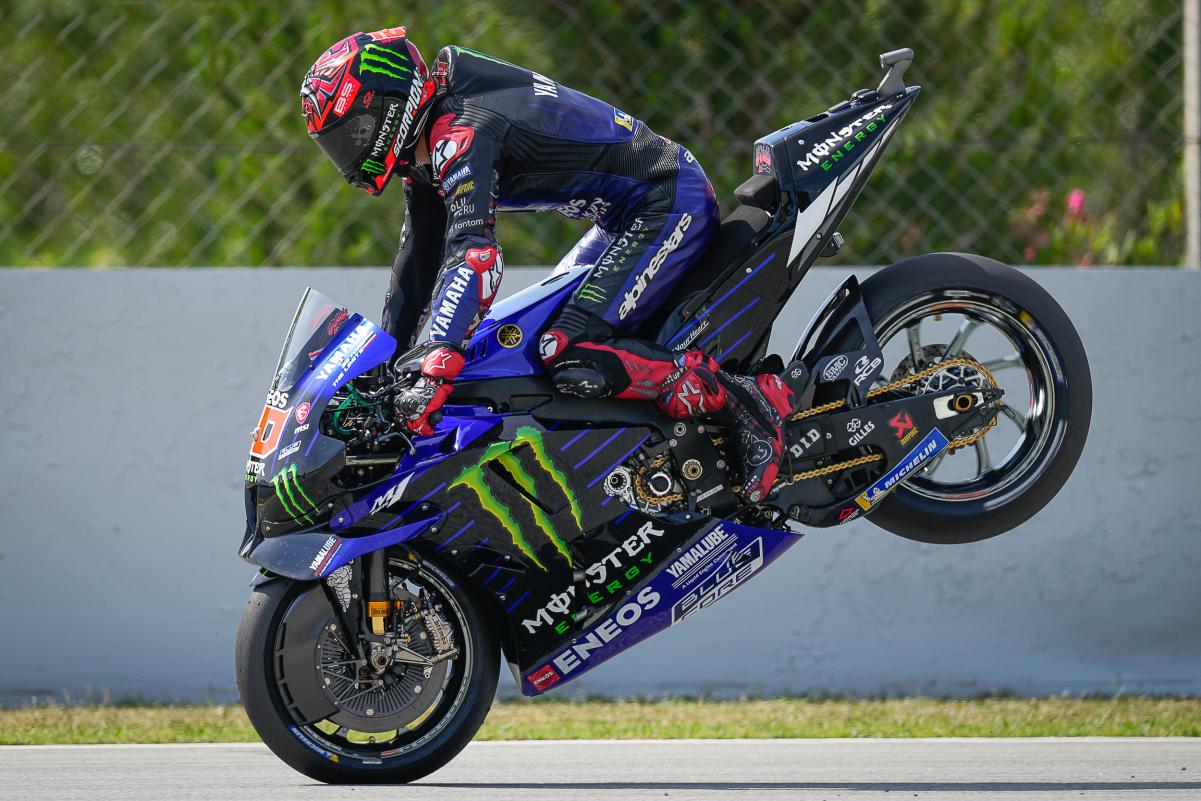 Yamaha’s Fabio Quartararo made a solid start in MotoGP Catalan GP to lead the grand prix from pole-sitter Aprilia’s Aleix Espargaro with Pramac Ducati’s Jorge Martin and Johann Zarco slotting themselves in third and fourth amid a huge crash.

Going into Turn 1, LCR Honda’s Takaaki Nakagami slid while making contact with the rear of Ducati’s Francesco Bagnaia and side of Suzuki’s Alex Rins. It was a huge impact for both the Japanese and the Spanish riders in the incident.

Bagnaia managed to rejoin but eventually retired, with Honda’s Stefan Bradl also crashing out at Turn 4 later on. Quartararo, meanwhile, led the way from Espargaro, Martin, Zarco as Honda’s Pol Espargaro made his way up to fifth along with Suzuki’s Joan Mir.

VR46 Ducati’s Luca Marini was seventh from Aprilia’s Maverick Vinales with the Top 10 seeing the Gresini Ducati pair of Fabio di Giannantonio and Enea Bastianini. As the race settled down, Suzuki’s Mir was handed a one-place drop for overtaking in yellows.

Quartararo continued to lead as Martin passed Espargaro for second but the Aprilia stayed on his tail for long. Zarco was a distant fourth with Mir in fifth from Marini and Vinales where P Espargaro lost out hugely after showing pace in early laps.

Bastianini was the rider on charge in seventh while being chased by Vinales, but a crash ended his race with teammate di Giannantonio also crashing out on the same lap from Top 10. Just before them, VR6’s Marco Bezzecchi also had a fall to retire.

All this allowed the KTM pair of Brad Binder and Miguel Oliveira to be eighth and ninth, with LCR’s Alex Marquez gaining places to be 10th along with RNF Yamaha’s Darryn Binder in 11th. Espargaro was 12th from Ducati’s Jack Miller, Tech 3 KTM’s Remy Gardner and RNF’s Andrea Dovizioso in the Top 15.

It was all going Quartararo’s way as he built up a huge gap to Espargaro who passed Martin for second with Zarco getting into the mix as well. The fight for second intensified where Martin got back to second after re-passing Espargaro, with Zarco just behind.

They had a big distance to Mir in fifth with Marini and Vinales also settling in. Behind them, Oliveira managed to get through Binder at one point but went wide for the South African to be back in eighth, as Marquez steadied in 10th.

Miller moved up to 11th from Binder, Gardner as Yamaha’s Franco Morbidelli and Tech 3’s Raul Fernandez moved up to 14th and 15th after Espargaro and Dovizioso dropped out, with the latter pitting to retire due to a suspected mechanical issue.

Quartararo eventually secured a fine MotoGP win in Catalan GP, with Espargaro returning to second but bizarrely ended up outside podium due to a premature celebration. The Spaniard thought the race was over but only top realise it wasn’t.

He started celebrating but quickly realised that the grand prix is still on when he got behind Marini. He eventually passed him for fifth with Martin and Zarco ending up second and third, as Mir ended up fourth ahead of a dejected Espargaro.

Marini was sixth from Vinales, Binder, Oliveira and Marquez in the Top 10. There was a shuffle behind with Gardner ending up 11th from Binder, Morbidelli, Miller and Fernandez where the Australian lost three places in the end stages.