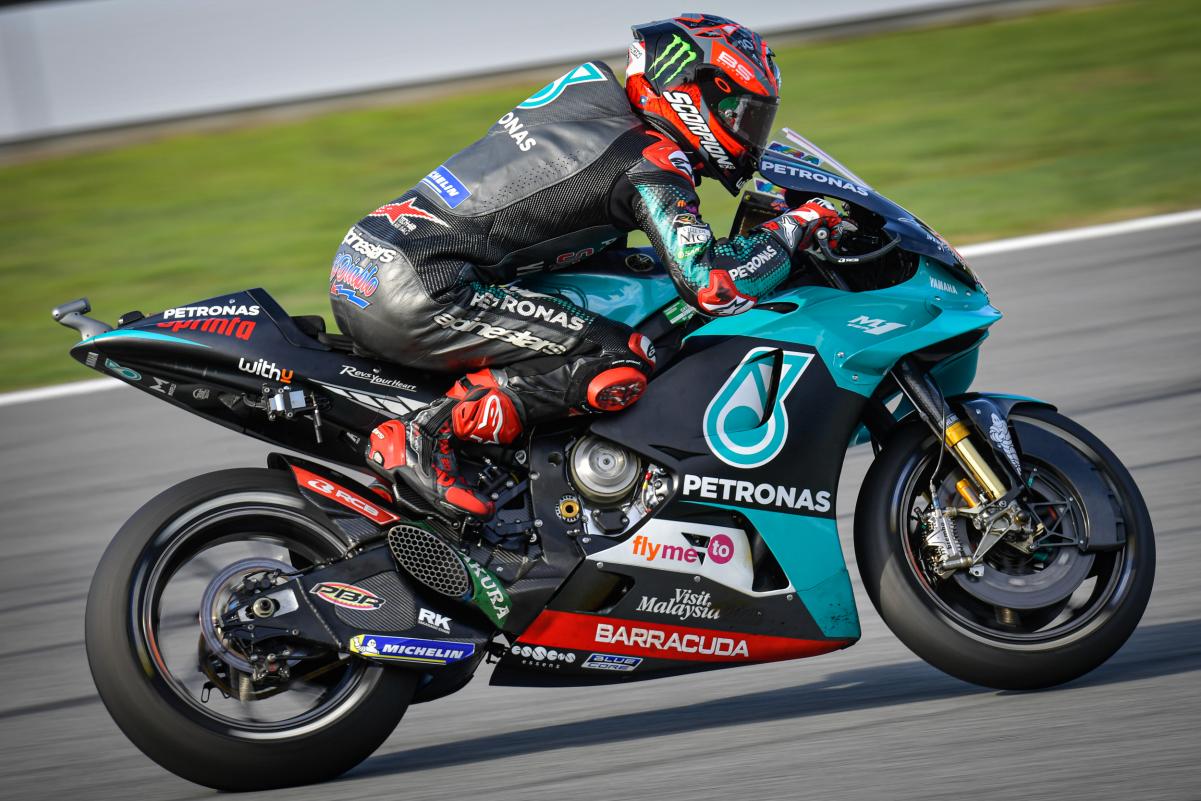 As riders sat 3-abreast on the grid, Petronas SRT’s Franco Morbidelli’s was positioned on pole for the first time in his career, the Italian leading the grid of 22 into turn one at the Circuit Barcelona Catalunya in Catalan GP.

It was a flying start from the Yamaha rider as he led factory man Valentino Rossi, but the opening lap was marred by an accident between the-former championship leader, Ducati’s Andrea Dovizisio and Avintia Ductai’s Johann Zarco.

Replays showed that it was started by Ducati’s Daniel Petrucci, who had a twitch in the corner which led Zarco to crash into Dovizioso. Also, Petronas SRT’s Fabio Quartararo – also dropped to fourth as Yamaha’s Maverick Vinales had a horror start to be 16th.

Quartararo positioned behind Pramac Ducati’s Jack Miller in fourth but the Frenchman fought back to retake third. In the interim, KTM’s Pol Espargaro overtook Suzuki’s Alex Rins for P6, before the latter reclaimed his position, having made up places at the start.

In this period, Espargaro came under pressure from Petrucci, who had Pramac’s Francesco Bagnaia, KTM’s Brad Binder and Aprilia’s Aleix Espargaro behind. In the fight, though, the leader in the pack hit the pavement and slid into the gravel.

Bagnaia got the better of Petrucci as LCR Honda’s Takaaki Nakagami got himself into the fight after the Japanese not only cleared Espargaro but also Binder. At the front, meanwhile, Quartararo got the better of teammate Morbideli at Turn 1 to take the lead.

Morbideli had Rossi on his tail for long but a hairy moment, allowed the mentor to pass him. However, he later on crashed out with the Petronas SRT rider reclaiming second, as Suzuki’s Joan Mir was back up in the podium position after Miller started to drop.

The Australian lost fourth to Rins as Bagnaia started to catch his Pramac teammate. Nakagami slotted in seventh from Petrucci, who had the other LCR of Cal Crutchlow in ninth after the Brit recovered well along with Vinales, who ran 10th.

Binder was 11th with Espargaro 12th after Tech 3 KTM’s Miguel Oliveira crashed out as the MotoGP riders started to struggle in the left-hander. As Quartararo led the way, teammate Morbideli lost to both Mir and Rins, with two Suzuki riders on the podium.

It stayed like that as Mir continued his upward charge to be second ahead of Rins, but Quartararo was relieved to secure a win in Catalan GP – his first since Jerez – and retake the MotoGP points lead after the crash for Dovizioso early on.

Morbideli held onto fourth despite the state of his tyres with Miller holding of Bagnaia and Nakagami for fifth with Petrucci in eighth ahead of Vinales, who passed Crutchlow on the final lap. It was Binder in 11th with Espargaro in 12th.