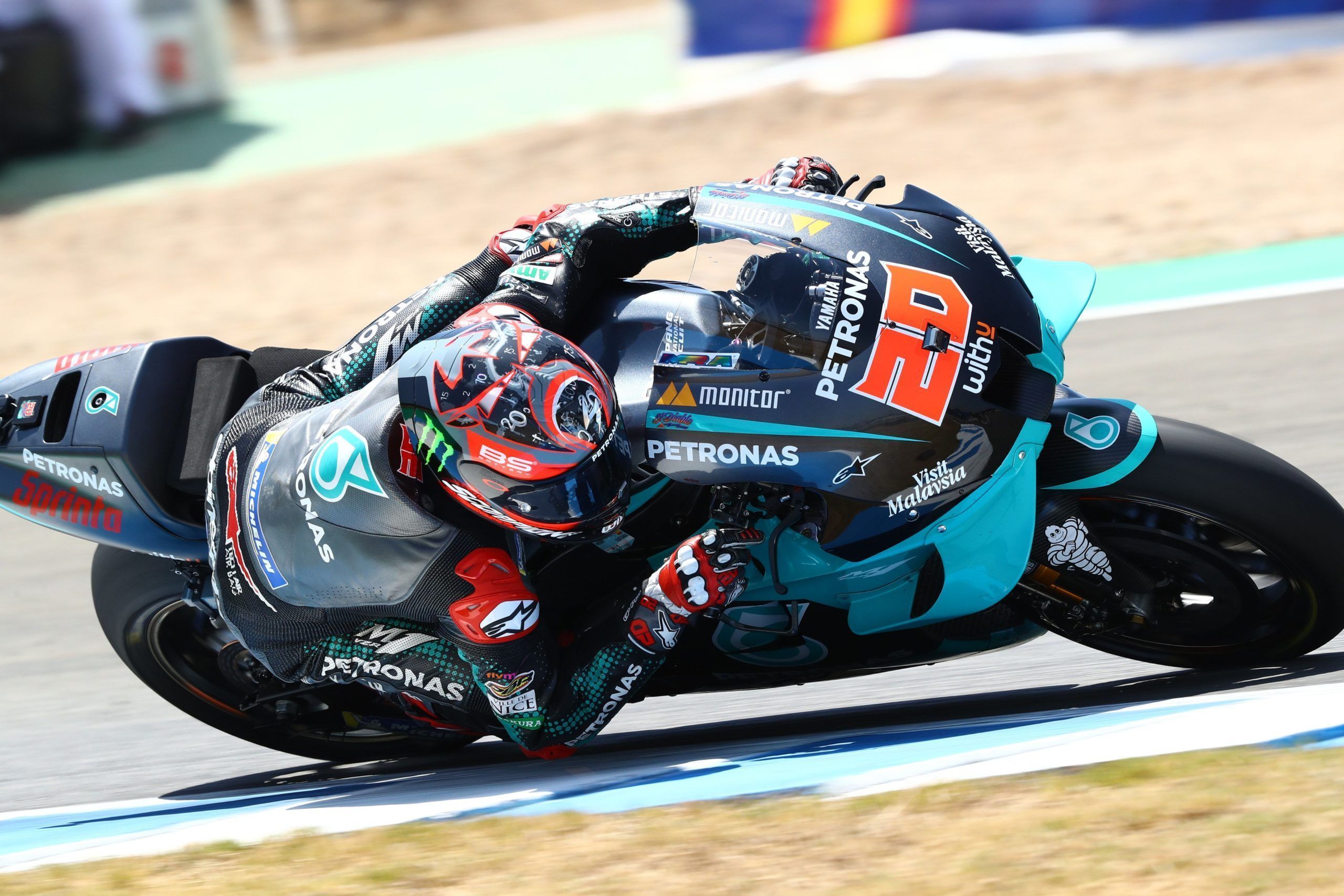 The first part in Andalucia MotoGP qualifying got off to a question mark start on the side Honda’s Marc Marquez, who did an installation lap and hoped off his bike to go straight into his motorhome with team’s chief Alberto Puig also meeting him.

It was looking disaster for Ducati’s Andrea Dovizioso, who was languishing in ninth along with Suzuki’s Alex Rins in 11th as LCR Honda’s Cal Crutchlow did well to be fifth after their first run. The second laps got things interesting in the Q2 MotoGP fight.

Oliveira and Morbidelli kept their top slots to make it to the second part with a 1m37.355s and 1m35.512s lap times respectively. In a mighty effort, Crutchlow just missed by 0.102s to be 13th despite having had a surgery on his wrist after his crash in MotoGP Round 1.

Dovizioso was out in Q1 but managed a respectable lap to be 14th from Zarco and Espargaro as Tech 3’s Iker Lecuona slotted in 17th from Avintia’s Tito Rabat, Aprilia’s Bradley Smith, Rins and Honda’s Alex Marquez, who had a late crash.

In like a deja vu moment, Alex was holding his right arm as well when he fell at Turn 5. He ended up 21st as the team stated no serious injuries but his elder brother was confirmed to be not taking part in the session, casting doubts on his Sunday’s participation.

The second part in Andalucia MotoGP qualifying had Yamaha’s Maverick Vinales leading the way provisionally with Pramac Ducati’s Francesco Bagnaia getting in between him and Petronas SRT’s Fabio Quartararo as KTM’s Brad Binder slotted in fourth.

It was a Yamaha fight at the top as Quartararo went quickest with a 1m37.007s which he held on until the end of the session to secure MotoGP pole for Andalucia GP. Vinales went fastest on his final lap but it was deleted due to track limits at Turn 7.

Petronas SRT’s Morbidelli slotted in sixth with Pramac’s Jack Miller was seventh with LCR’s Takaaki Nakagami in eighth, being the lead Honda. The Japanese looked good in the practice but an off on his final lap limited his charge.

KTM’s Brad Binder ended up ninth as Suzuki’s Joan Mir was 10th from Ducati’s Danilo Petrucci and KTM’s Pol Espargaro, who couldn’t improve after his fall. Following the MotoGP session, Honda confirmed that Marquez won’t take part in the Andalucia GP on Sunday.