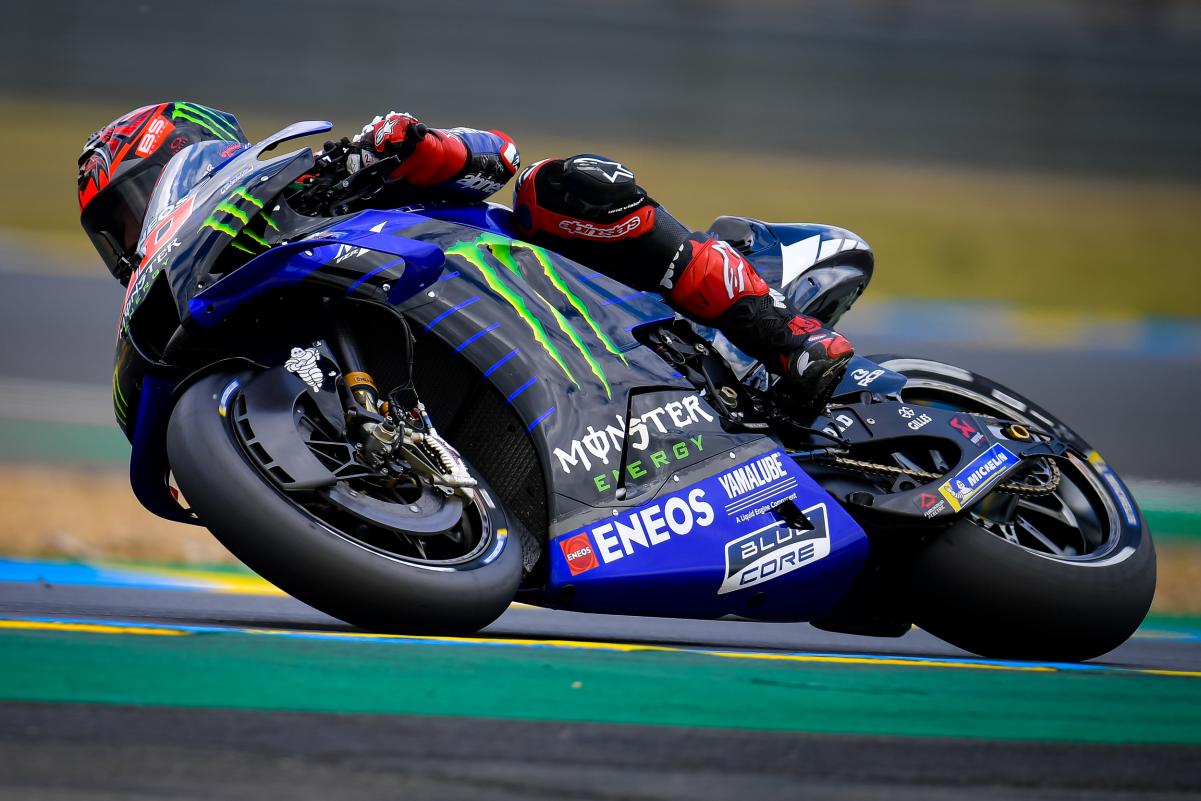 Even though it was not raining during first part of MotoGP qualifying in French GP, the Le Mans circuit was still wet enough for riders to be extra cautious to make it into Q2. The first to fall was Aprilia’s Lorenzo Savadori, but he made it back to ride on the second bike.

On track, it was a tussle between the two Suzuki riders and other Aprilia of Aleix Esparagro, for a spot in Q2. The latter led the way with less than five minutes to go after he pushed Alex Rins out, while Joan Mir stood in second from LCR Honda’s Alex Marquez.

Tech 3 KTM’s Danilo Petrucci pushed Mir to third after going second, as Marquez had a crash, which ended his chances. He was desperately looking for a scooter to get back to the garage to hop on the second bike, but it was too late to do so.

There was another crash for Pramac Ducati’s Tito Rabat, as it was Aprilia 1-2 after Espargaro went quickest from Savadori. The final laps changed the line-up a bit as the latter went quickest with a 1m42.550s lap to make it into Q2.

A late improvement from Avintia Ducati’s Luca Marini, helped, him to be second with a 1m43.352s lap and make it into Q2, as he pushed Espargaro to third and out of qualifying. The Spaniard will start from 13th ahead of the Suzuki pair of Mir and Rins.

It was difficult run for Ducati’s Francesco Bagnaia, who could only manage 16th, with Tech 3 pair of Petrucci and Iker Lecuona in 17th and 18th. The 22 MotoGP runners were rounded out by Marquez, Rabat, KTM’s Brad Binder and Avintia’s Enea Bastianini.

The second part in French GP MotoGP qualifying had a mixed pack with riders, where few opted for the slick tyres. There was a moment for Petronas SRT’s Valentino Rossi in the final corner, which ruined his fast lap, as Ducati’s Jack Miller led the way.

He was displaced by Pramac’s Johann Zarco first, but it was Honda’s Pol Espargaro, who went quickest then after Miller briefly retook top spot from the Frenchman. There was another change, as Honda’s Marc Marquez took the top spot.

LCR Honda’s Takaaki Nakagami went second, as KTM’s Miguel Oliveira crashed out, when the rain started to pick up. It looked like a Honda 1-2-3 at one moment, but the final lap changed the Top 3 totally, making it a Yamaha 1-2 finish out of nowhere.

Zarco alsi improved to fifth, as Marquez dropped to sixth from Nakagami, with Espargaro in eighth after a late crash. Rossi recovered to ninth from Oliveira, Savadori and Marini in the Top 12.