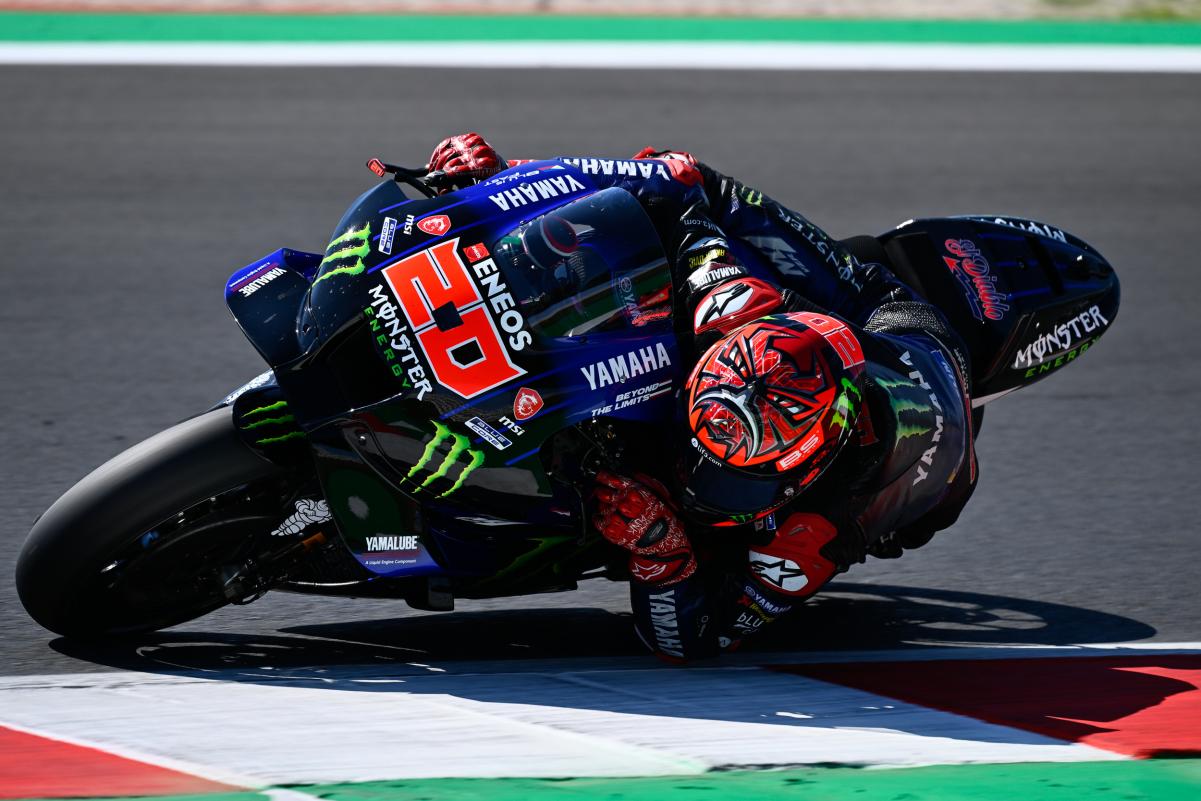 Crews are packing up after the completion of two days of action at the Official MotoGP Misano Test, and it is the Monster Energy Yamaha MotoGP™ Team on top of the timesheet. Fabio Quartararo finished Day 2 with a 1:31.054, the fastest time of the test overall, while at the Repsol Honda Team, Marc Marquez continued to accumulate laps in his comeback from surgery.

Much of the pre-test talk centred around Yamaha’s new engine, and the top speed charts made for very encouraging reading indeed. Quartararo clocked 298.3km/h in the pre-lunchtime running on Wednesday, third on that metric at less than 2km/h slower than Jorge Martin (Prima Pramac Racing) recorded on one of the Bologna bullets otherwise known as a Ducati. ‘El Diablo’ admitted he used a slipstream to achieve that speed, but was still quite happy with what the Iwata manufacturer has rolled out. He was fastest in that morning session on a 1:31.116 before shaving off a little more time in the afternoon to consolidate his place at the top of the timesheet.

Yamaha also worked on a new chassis, as well as new aerodynamic pieces, with different versions seen on the bikes of Quartararo and Franco Morbidelli, who finished the test 12th-fastest overall. While Misano is very much about developing a bike for the following season, it might also give Quartararo a big boost to his hopes of back-to-back World Championship titles, given Team Manager Massimo Meregalli says that the new chassis could appear as soon as the upcoming Gran Premio Animoca Brands de Aragon.

Intriguingly, Meregalli also reported that Yamaha may have found a way to achieve more power this year, which would require a development somewhere other than the engine. What have they got up their sleeve, and we will see the evidence of that in Aragon also?

As for the machinery, there was plenty going on at Honda as well. The Kalex swingarm which HRC Test Rider Stefan Bradl tried out on Day 1 was back again on Day 2 – and this time, it was seen on one of Marc Marquez’s bikes. The #93 had three different examples of the RC213V at his disposal, those being a pair of 2022 versions and more of a 2023 model, and Honda tested three different air intakes across its fleet of motorcycles. Bradl also tried out a different exhaust, and even did some back-to-back running with the 2021 bike.

On the timesheet, Marc Marquez was Honda’s best in 13th for the test on combined times, having gone as fast as a 1:31.642 in the morning session on Day 2. More importantly, however, there is plenty for the Japanese marque’s technical gurus to pore over in coming weeks and months as preparations for next season ramp up.

San Marino Grand Prix winner Francesco Bagnaia (Ducati Lenovo Team) finished the test second-fastest thanks to the 1:31.172 which he set before lunchtime on Day 2, while the man who was runner-up last Sunday, Enea Bastianini (Gresini Racing MotoGP™) claimed fourth in the test on a 1:31.260. None of the Ducati riders ventured onto the track in the afternoon, while Mooney VR46 Racing Team had already wrapped up its testing on Day 1.

In the main, the Bologna marque worked on chassis and new aerodynamics, although only with Bagnaia and Bastianini. Meanwhile, Jack Miller (Ducati Lenovo Team) had a spill at Turn 4 – rider okay.

Both of Aprilia Racing’s full-time Grand Prix riders, Maverick Viñales and Aleix Espargaro, finished in the top five, the former third on a 1:31.189 and the latter fifth on a 1:31.333 – both set in the morning session on Day 2. Of particular note, however, was that Espargaro’s crash in that session has left him with a broken little finger on his left hand. Thankfully, he will not need surgery, and while the Argentina Grand Prix winner admitted to being in pain, he expects to be okay to ride at Aragon.

The Noale manufacturer tested different chassis and, like Yamaha, could roll out a new specification as soon as Aragon. There was also new aerodynamics to trial as well.

Despite chatter in the paddock, Red Bull KTM Factory Racing Team Manager Francesco Guidotti said that the Austrian manufacturer did not have a 2023 prototype at Misano, although it did test 2023 parts. Miguel Oliveira was quickest of its riders on a 1:31.585 although much of the development work was done by Brad Binder and test rider Dani Pedrosa – with the forner putting in a big effort of 46 laps on the Wednesday afternoon.

Team Suzuki Ecstar completed its programme on Day 1 of the test, and was not in action on Day 2.

Here are your combined times at the end of two days of testing! 👇@FabioQ20 fastest from @PeccoBagnaia and Maverick! 👏#MisanoTest pic.twitter.com/x3hiXLQzDI