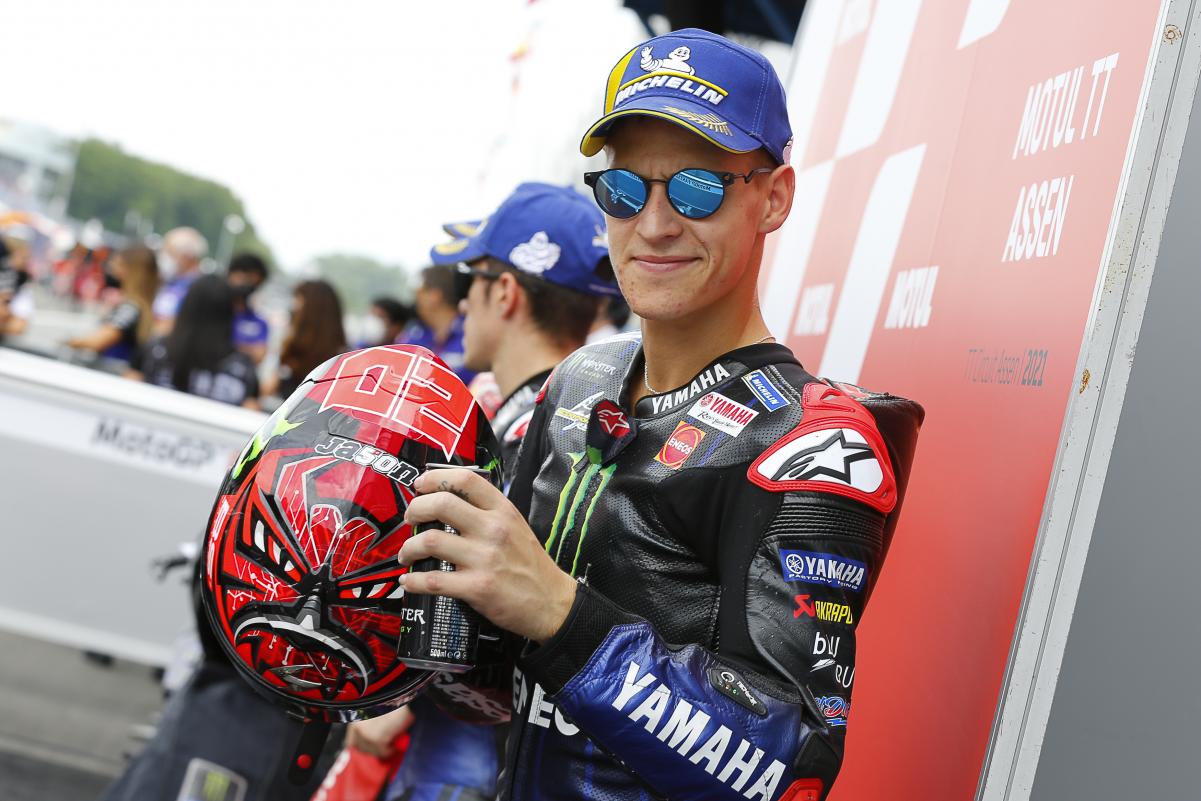 Pole-sitter Maverick Vinales made a good start in MotoGP Dutch GP, but Yamaha teammate Fabio Quartararo cut across him and took the lead until Ducati’s Francesco Bagnaia came through him and led the way, despite the attempts from the Frenchman to get back.

LCR Honda’s Takaaki Nakagami slotted in third, with Vinales in fourth from Suzuki’s Alex Rins and Pramac Ducati’s Johann Zarco. The other factory Ducati of Jack Miller was seventh from Suzuki’s Joan Mir, with KTM’s Miguel Oliveira dropping to ninth.

The Top 10 was rounded out by Aprilia’s Aleix Espargaro, as Honda’s Marc Marquez climbed up to 11th after starting from 20th, to get ahead of teammate Pol Esparagro. At the same time, Petronas SRT Yamaha’s Valentino Rossi dropped to the back.

At the front, Bagnaia continued to press on but Quartararo got through in the final corner. However, the Ducati rider retook the MotoGP Dutch GP lead on the main straight. The Frenchman, though, came back and passed the Italian to take the lead for good.

Quartararo started to pull away from Bagnaia, as Nakagami held off Vinales charge. Zarco steadied in fifth after he was cleared of the incident with Rins, which dropped the Suzuki rider to the back. There was an attempt from Mir to pass the Frenchman.

But Zarco stayed ahead, as Oliveira moved up to seventh from Miller, Espargaro and Marquez in the Top 10. P Espargaro was 11th from Tech 3 KTM’s Iker Lecuona, Pramac’s Jorge Martin, LCR’s Alex Marquez and KTM’s Brad Binder in the Top 15.

Outside the points, Rossi had a heavy crash at Turn 7, which ended his MotoGP Dutch GP early. While Quartararo went into the distant, Bagnaia came under tremendous pressure from Nakagami and Vinales, along with the immediate pack behind.

Nakagami got through Bagnaia multiple times but the Ducati rider’s straightline speed was enough to get through him. The Italian’s efforts ended in vain after he was handed a Long Gap Penalty for track limits, after having got warnings for the same.

While Bagnaia had to take the penalty, Vinales got a warning too, but he cleared Nakagami and moved up to second. The Japanese MotoGP rider dropped like a stone then after, as he was ninth in couple of laps, which included a small tap from Mir.

The Suzuki rider was fourth behind Zarco, with Oliveira in fifth from Espargaro, while Bagnaia rejoined in seventh ahead of Marquez. The Top 10 was rounded out by P Espargaro after Miller crashed on his own but managed to rejoin the Dutch GP.

Lecuona was 11th from teammate Danilo Petrucci, with Binder, Marquez and Rins in the Top 15 after a mechanical issue for Martin led to his retirement. There was another retirement, after Lecuona crashed out, while Miller was shown the black and orange flag.

At the front, Quartararo had a comfortable lead from Vinales, as Mir passed Zarco for third. A Esparagro dropped behind Bagnaia and Marquez in the fight for sixth, as Rins climbed up to 11th after dropping to the back at the start of the MotoGP Dutch GP.

It was another win for Quartararo in Dutch GP as he extended his MotoGP points lead to head into the summer break. After a podium in Qatar, Vinales was back up there to make it a Yamaha 1-2, while Mir’s late surge helped him to end up third.

Zarco was fourth from Oliveira, as Bagnaia recovered to sixth from Marquez, who fended off late push from Espargaro. It was Nakagami in ninth from P Esparagro, with Rins in 11th from Binder, Petrucci, A Marquez and Avintia Ducati’s Enea Bastianini in the Top 15.