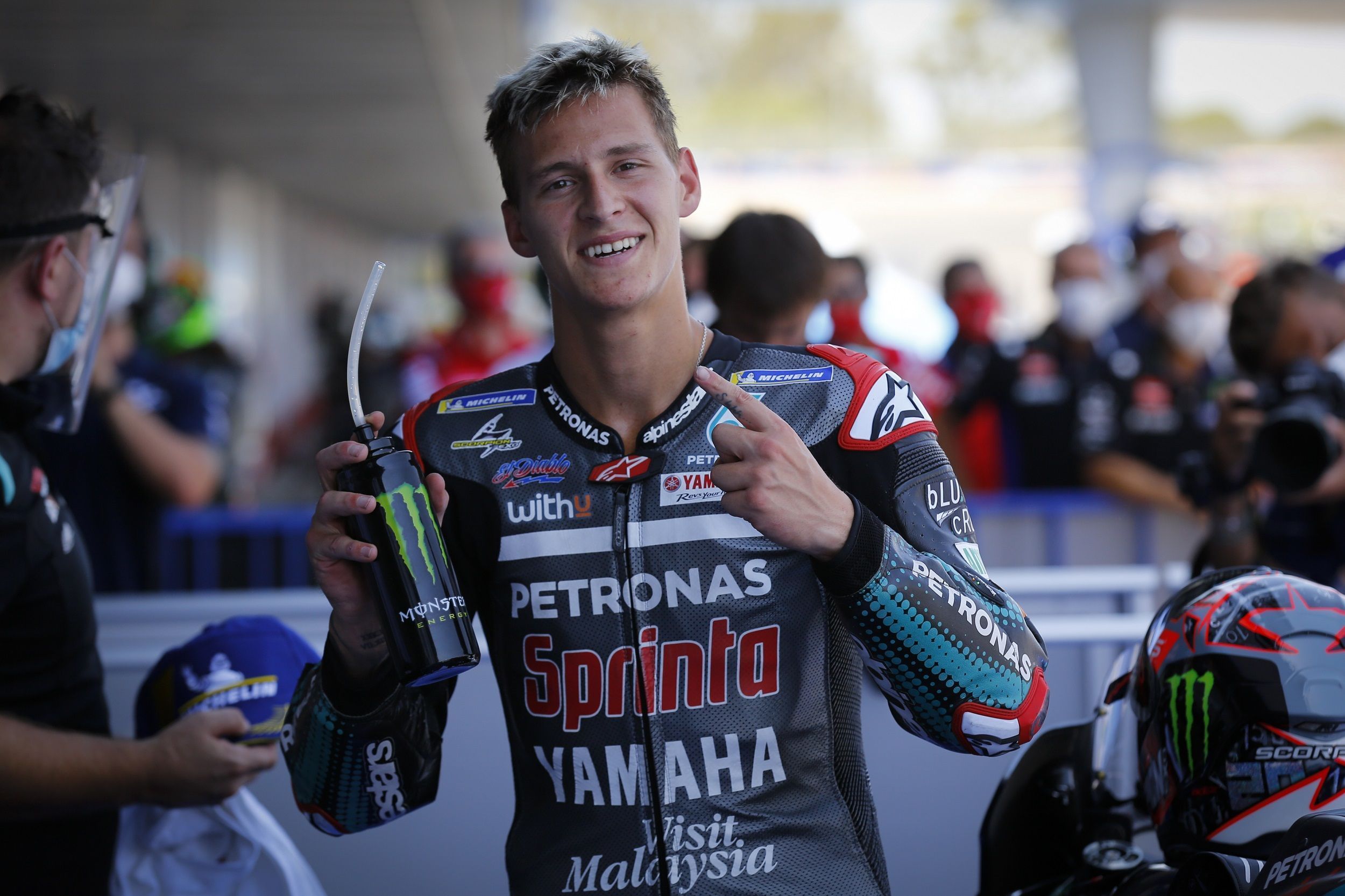 It was a solid start from pole-sitter Petronas SRT’s Fabio Quartararo in MotoGP Andalucia GP at Jerez as he led a Yamaha 1-2-3 off the line with Maverick Vinales and Valentino Rossi in second and third respectively. Pramac Ducati’s Francesco Bagnaia dropped to fourth.

Rossi, though, made the move on Vinales to take second as Pramac’s Jack Miller cleared teammate Bagnaia. Behind, KTM’s Brad Binder roughed the back of Tech 3 KTM’s Miguel Oliveira as the Portuguese rider crashed out with Aprilia’s Bradley Smith getting caught out.

At the front, Quartararo led the way comfortably but Vinales started to struggle as he just couldn’t pass Rossi despite multiple attempts. He had the Pramac pair of Miller and Bagnaia right on his tail, who were waiting to pounce on him.

A wide moment from Miller allowed Bagnaia to get through him as he cleared Vinales to get on the podium in third. Moments later Miller crashed out as Petronas SRT’s Franco Morbidelli jumped to fourth after passing LCR Honda’s Takaaki Nakagami.

The crashes continued with Tech 3’s Iker Leucona, Aprilia’s Aleix Espargaro, Ducati’s Danilo Petrucci and KTM’s Binder, all going down, where the South African had a massive high-side but he was OK. It left only 15 running mid-way in the Andalucia MotoGP race.

While Quartararo continued his prime run, Rossi came under pressure from Bagnaia and he subsequently lost second to his own protege. The Italian then had to defend from his other VR46 rider with Morbidelli close behind but it wasn’t for long.

It was looking all-good for Morbidelli until an engine gremlins forced him to retire from the Andalucia MotoGP race. It came at the same time as LCR Honda’s Cal Crutchlow, where the Brit came into the pits to get his bike checked before heading out again.

As Rossi and Vinales egged on in the fight for podium, Bagnaia made it a Yamaha 1-2-3 as the Ducati engine gave way and he was forced to retire to leave only 13 riders running with Crutchlow continuing on despite pain on his wrists in insanely hot conditions at Jerez.

Quartararo was unbeatable at Jerez as he made it back-to-back MotoGP wins in Andalucia GP to have 50 points in his kitty. He led a Yamaha 1-2-3 but was  clear of Vinales, who finally found a way through Rossi with two laps remaining to second.

Nakagami fancied his first MotoGP podium but secured his best result in fourth from Suzuki’s Joan Mir, who was close behind the Japanese. Ducati’s Andrea Dovizioso ended up a lonely sixth as KTM’s Pol Espargaro was seventh after losing out at the start.

Honda’s Alex Marquez fought from the back to be eighth – his best result in MotoGP – with Avintia Ducati’s Johann Zarco doing well in ninth ahead of Suzuki’s Alex Rins, who got a Top 10 finish despite the damaged shoulder.

The other Avintia of Tito Rabat was 11th as Aprilia’s Smith recovered from Lap 1 trouble to be 12th as LCR’s Crutchlow got the crucial points in 13th, the last to finish in a grand prix of attrition in the hot conditions at Jerez.