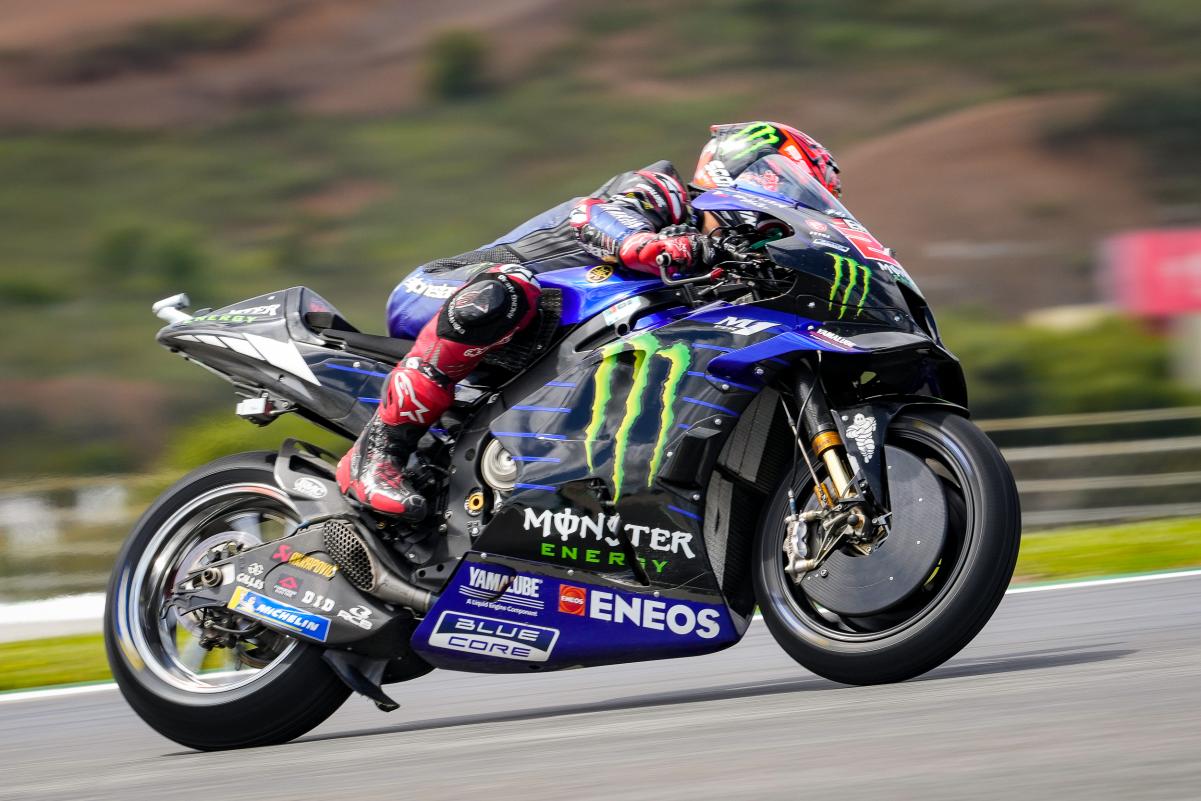 The MotoGP Portuguese GP started off well for Suzuki’s Joan Mir who immediately took the lead from Yamaha’s Fabio Quartararo and Ducati’s Jack Miller, as pole-sitter Johann Zarco onboard his Pramac Ducati dropped to fourth from LCR Honda’s Alex Marquez.

KTM’s Miguel Oliveira made up ground to sixth as Aprilia’s Aleix Espargaro dropped to seventh from brother Pol on his Honda. Pramac’s Jorge Martin was ninth from Suzuki’s Alex Rins who climbed from 23rd to 10th in the opening couple of laps.

As Mir led the way, Quartararo started to press on the Suzuki rider and eventually passed him at Turn 1 to take the lead in MotoGP Portuguese GP. Zarco passed Miller to third as Marquez stood fifth from Espargaro, Oliveira and Rins in the Top 8.

There was a gap then to the group of Espargaro, Marquez, Gresini Ducati’s Enea Bastianini and KTM’s Brad Binder in the fight for ninth. Marquez won the battle for the time being from Espargaro, Bastianini and Binder with LCR’s Takaaki Nakagami a bit off in 13th.

Aprilia’s Maverick Vinales made his way to 14th from Ducati’s Francesco Bagnaia in the Top 15. The Italian had a slow start due to his qualifying crash, but slowly got into a rhythm to claw his way up, although not at the same pace as Rins was doing.

He got into a tussle against Marquez, Espargaro and Oliveira for fifth. He got through them at one point but Espargaro got fifth to keep him behind where Marquez dropped to eighth behind Olivera. While Zarco started to press Mir, teammate Martin crashed out.

Another to crash was MotoGP points leader Bastianini, with Nakagami clouting the back of Binder to fall but managed to continue. Amid all this, Quartararo led the way from Mir who regained second after a brief attack from Zarco as Miller was stagnant in fourth.

Espargaro was fifth from Rins with Oliveira seventh ahead of A Marquez, M Marquez and P Espargaro in the Top 10. Binder was 11th from Bagnaia with Vinales 13th, VR46 Ducati’s Luca Marini 14th and Yamaha’s Franco Morbidelli 15th.

At the front, Quartararo checked himself out with the fight on between Mir, Zarco and Miller. The Frenchman tried couple of times but made it stick on Mir to take second as the Suzuki rider then came under pressure from Miller, Espargaro and Rins.

The drama only intensified when Miller crashed out taking Mir with him at Turn 1. The Australian tried to take the inside line but slipped taking the Suzuki rider with him. Zarco got a breathing space in second but Espargaro and Rins started to press him on.

Oliveira moved to fifth after his teammate Binder crashed out, with A Marquez sixth ahead of M Marquez as Espargaro was eighth from Bagnaia and Vinales in the Top 10. There was another retirement with Gresini’s Fabio di Giannantonio shutting shop due to an issue.

At the front, Quartararo dominated once in lead to win MotoGP Portuguese GP as Zarco made it French 1-2 as Espargaro completed the podium from Rins and Oliveria in the Top 5. M Marquez won the fight against his brother Alex in a solid fight for sixth.

Bagnaia got eighth from Espargaro on the line with Vinales in 10th from RNF Yamaha’s Andrea Dovizioso, Marini, Morbidelli, Tech 3 KTM’s Remy Gardner and VR46’s Marco Bezzecchi in the Top 15 and points position.