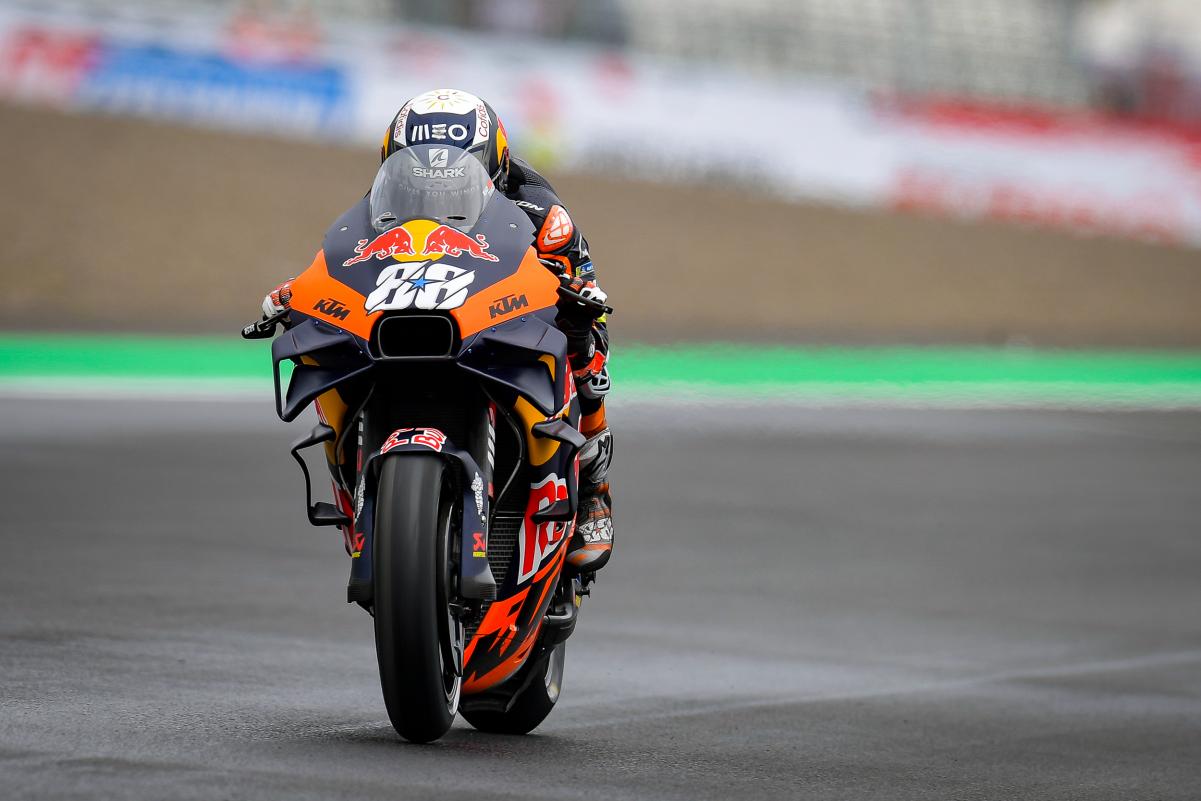 The MotoGP Indonesian GP race was delayed by more than a hour after torrential rain hit the Lombok circuit right when the premier class were getting ready for action. But when the grand prix got going on a wet circuit, it was a clean run to start off.

Pole-sitter Fabio Quartararo got through cleanly on his Yamaha as KTM’s Miguel Oliveira moved up to second from Ducati’s Jack Miller in the Top 3, with Suzuki’s Alex Rins stationed himself in fourth from Pramac Ducati’s Johann Zarco in the Top 5.

Suzuki’s Joan Mir was sixth from Yamaha’s Franco Morbidelli, who gained chunk of places at the start with Pramac’ Jorge Martin dropping to eighth from Ducati’s Francesco Bagnaia and lone Honda of Pol Espargaro in the Top 10.

Teammate Marc Marquez was ruled out of the Indonesian MotoGP race after a Warm-Up crash causing concussion. Even though Quartararo got away well, the reigning champion came under tremendous pressure from both Oliveira and Miller soon.

And soon both cleared him to be first and second. In fact, Miller passed Oliveira to take the lead but the Portuguese MotoGP rider came back on him to retake the lead. Quartararo dropped back to fifth after Rins and Zarco cleared him for third and fourth.

Mir was sixth from Martin, who had a big save after running on the kerb at the final corner. But he couldn’t save the second moment at Turn 1 when being chased by Morbidelli. He eventually crashed out, allowing the Yamaha rider to be seventh.

A moment from Bagnaia dropped him outside of the Top 10, much like Honda’s Espargaro – both made a massive save. This allowed VR46 Ducati’s Luca Marini to be eighth from KTM’s Brad Binder, with Bagnaia climbing back up to be 10th.

At the front, Oliveira continued to lead the way as Miller started to come under pressure from Zarco who managed to clear Rins early on. The Suzuki rider then lost out to Quartararo for fourth, with Mir steadying in sixth from Morbidelli.

Marini was eighth but came under pressure from D Binder who cleared B Binder, Bagnaia and A Espargaro to move up to ninth. While Oliveira continued to lead, the fight for second soon became a three-way tussle between Miller, Zarco and Quartararo.

Zarco initially cleared Miller for second but went wide in the right-hander allowing the Ducati rider to retake second. As they continued to tussle, Quartararo joined the party and didn’t waste much time and took on both to move up to second in the order.

Once in the clear air, Quartararo started to reel in Oliveira, as Zarco finally got through Miller for third. It wasn’t enough for the Frenchman eventually as Oliveira cruised to win MotoGP Indonesian GP from Quartararo and Zarco in the Top 3.

Miller ended up fourth from the Suzuki pair of Rins and Mir in fifth and sixth as Morbidelli recovered well to seventh. The fight for eighth raged on until the final lap, with KTM’s Binder winning the fight after an aggressive move on the inside on his brother.

D Binder was 10th after losing out to A Espargaro, with Bastianini 11th from P Espargaro, Marquez, Marini and Bagnaia in the points position in the Top 15. Aprilia’s Maverick Vinales missed on points in 16th from Tech 3 KTM’s Raul Fernandez.