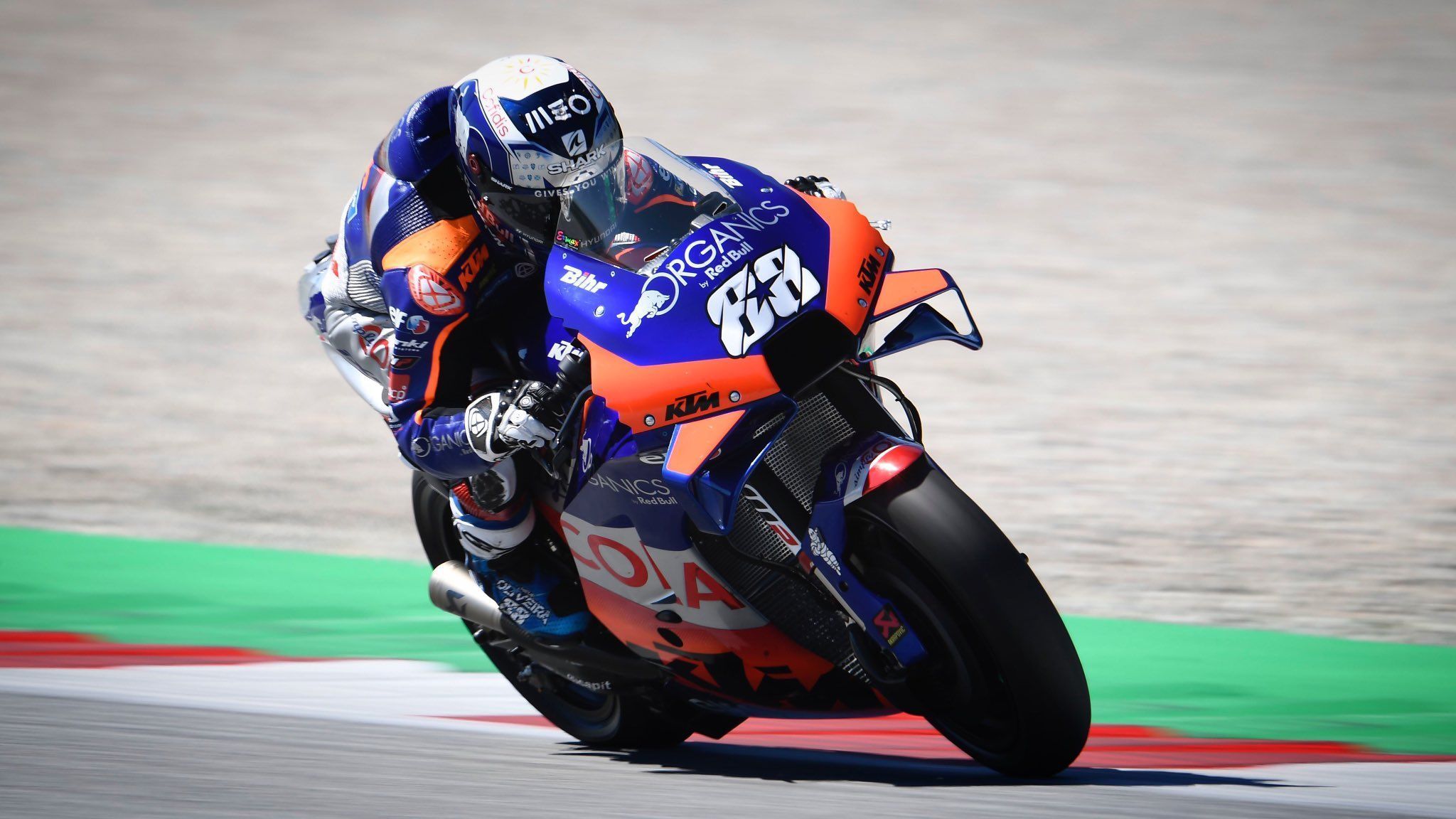 Pole-sitter KTM’s Pol Espargaro started MotoGP Styrian GP well at Red Bull Ring under cloudy conditions but the Spaniard had a wide moment to drop to fourth in the middle of the lap to drop to fourth as Suzuki’s Joan Mir led the way.

But he dropped to second after having to give way to Pramac Ducati’s Jack Miller as the Australian took control with LCR Honda’s Takaaki Nakagami in third as Suzuki’s Alex Rins was fifth from Yamaha’s Maverick Vinales and Ducati’s Andrea Dovizioso.

Tech 3 KTM’s Miguel Oliveira was eighth with Yamaha’s Valentino Rossi making up places to ninth along with Tech 3 KTM’s Iker Lecuona as a wide moment from Petronas SRT Yamaha’s Fabio Quartararo dropped him to 11th from KTM’s Brad Binder.

At the front, meanwhile, Mir checked out Miller to take the MotoGP Styrian GP lead with the Australian having to fend of Nakagami. A wide moment from Espargaro brought Rins in the game to be fourth but the KTM rider came back and retook the position.

Behind, Dovizoso passed Vinales to sixth as Binder made ground to pass Oliveira, Rossi, Leucona and Quartararo to be eighth. The MotoGP points leader was struggling in 12th while squabbling with Honda’s Alex Marquez as the Frenchman went wide again.

While the leaders steadied, Binder defended hard from Oliveira as a wide moment from Rossi allowed Lecuona pass the Italian as he then even cleared Vinales to be ninth. The South African went on to pass Dovizioso as well for sixth then.

He lost to Oliveira too to be eighth as Quartararo passed Rossi and Vinales to be 10th, where the latter dropped to 13th behind Ducati’s Danilo Petrucci, with a suspected issue as he waved his hands up in the final corner to allow riders through.

At the front, though, Mir continued to lead the way as Miller and Nakagami had their fight for second where the Japanese got ahead but the race was red flagged as a brake failure forced Vinales to jump off his bike running at about 210km/hr at Turn 1.

The bike rammed into the air fence and caught fire as the safety barrier was replaced then. The MotoGP Styrian GP re-started with 12 laps on board as Mir led the way initially but Miller got him eventually to lead with Nakagami and Rins having a bad start.

Espargaro was upto third with Oliveira fourth from Binder with Dovzioso sixth, Nakagami seventh, Rossi eighth, Rins ninth and Lecuona 10th. MotoGP points leader did not have the greatest of re-start with Quartararo dropping to 14th in the order.

As Miller led the way on brand new tyres, Espargaro got past Mir to be second as Dovizioso took fifth from Binder, while Quartararo fought with Marquez for the last point position behind. Yamaha struggled as Rossi lost eighth to Rins.

Meanwhile, at the front, it was Miller fending off Espargaro and Oliveira, who passed Mir for third as the Spaniard then lost to Dovizioso to move to fourth. At the same time, a wide moment from Binder dropped him behind Rins in eight.

Espargaro eventually passed Miller to take the lead but it all came down to the last lap and the final corner where the KTM and Ducati rider went wheel-to-wheel which allowed Oliveira to sneak past the two taking the inside line to secure the win.

It was a photo-finish with Oliveira taking his and Tech 3’s first MotoGP win in the 900th premier class race as Miller steadied in second with Espargaro third after going wide. Miler ended up fourth having passed Dovizioso, after he went wide.