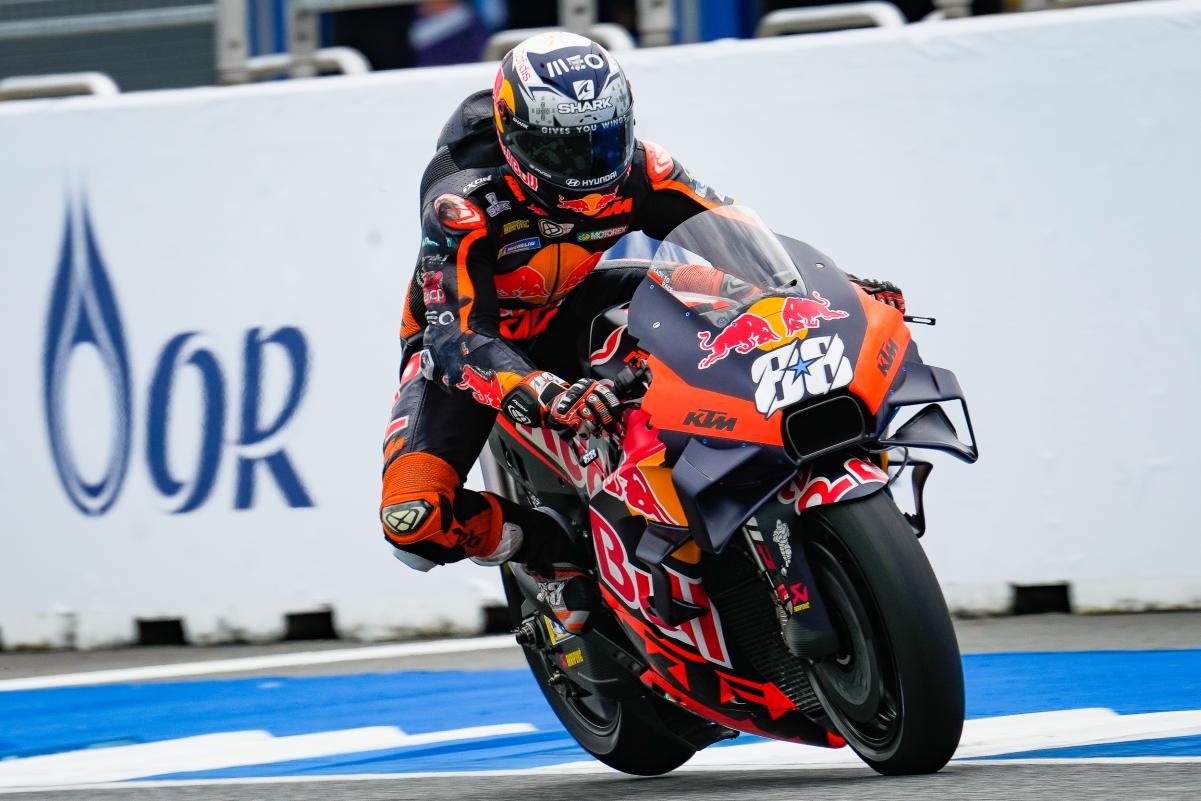 Miguel Oliveira came through the field to win wet MotoGP race in Thai GP from Jack Miller and Francesco Bagnaia, as Fabio Quartararo was only 17th.

The start to the MotoGP race in Thai GP at Buriram circuit was delayed due to torrential weather conditions as the rain continued on. After a lengthy delay, the grand prix started under wet conditions as pole-sitter Marco Bezzecchi led the way in his VR46 Ducati.

He did go wide and was handed a drop of one place later in the race. Behind Bezzecchi was Ducati pair of Francesco Bagnaia and Jack Miller, with the Australian gaining on Lap 1. Pramac Ducati’s Jorge Martin slotted in fourth from Honda’s Marc Marquez.

There was also a moment between Aprilia’s Aleix Espargaro and KTM’s Brad Binder, for which the Spaniard was handed a Long Gap Penalty. At the front, Miller was the rider on charge as he passed both Bagnaia and Bezzecchi to lead the MotoGP Thai GP.

The latter gave up the lead as directed and started to lose ground. Oliveira slotted himself into second from sixth with Bagnaia passing Bezzecchi for third. Marquez started to find pace along with his brother Alex, who started to climb up from the Top 10.

VR46’s Marini crashed out as Quartararo continued to lose places outside the Top 15. At the front, Miller started to come under pressure from Oliveira in the fight for the lead, as Bagnaia was third from M Marquez and A Marquez in the Top 5.

Zarco was sixth from Martin, with Bastianini in eighth, Bezzecchi dropping to ninth and Yamaha’s Franco Morbidelli in the Top 10. Tech 3 KTM’s Raul Fernandez was 11th from Aprilia’s Maverick Vinales, Binder, Espargaro and Suzuki’s Alex Rins in 15th.

The fight between Miller and Oliveira started to close in and the Portuguese racer eventually took the MotoGP Thai GP lead, with Bagnaia in third who started to come under pressure from Marquez and Zarco late in the race, where the Frenchman passed Alex.

Oliveira eventually held on to the lead to win MotoGP Thai GP from Miller, as Bagnaia held off Zarco who kept fourth from Marquez. Bastianini was sixth from Vinales as A Marquez dropped to eighth late in the race with Martin and Binder rounding Top 10.

The South African passed both Espargaro and Morbidelli to be 10th, as Rins, P Espargaro and Fernandez rounded the Top 15 points position. Having started from pole, Bezzecchi ended up outside points in 16th from MotoGP points leader Quartararo.