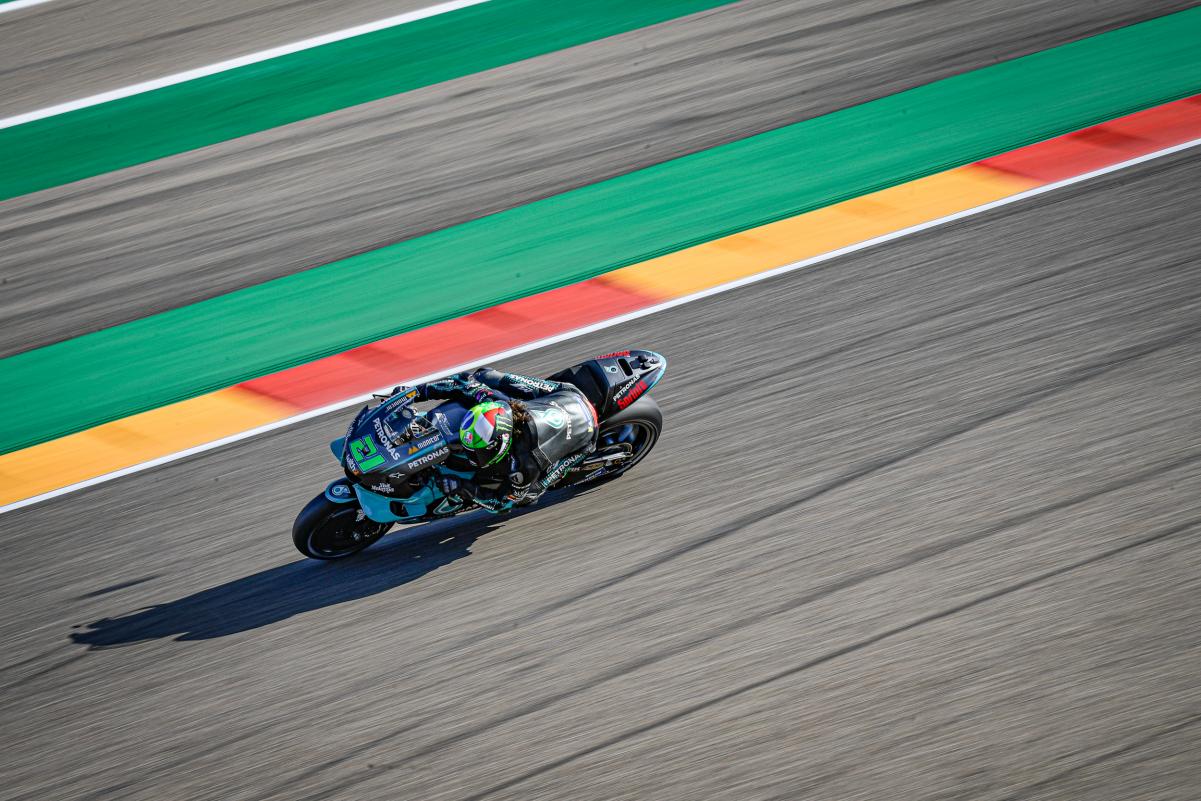 Pole-sitter LCR Honda’s Takaaki Nakagami started MotoGP Alcaniz GP well from Petronas SRT’s Franco Morbideli and Suzuki’s Alex Rins, but a wide moment at Turn 4 saw him crash out from lead to allow the Italian to take the lead from the Spaniard.

The Italian’s teammate crashed out at Turn 2 when he was hit by KTM’s Brad Binder at the back. A dejected Nakagami was back in the garage as his Honda stablemate started to push through after passing Espargaro and Crutchlow in quick succession.

He made a quick work of Vinales as well, who already lost to Mir, to drop to sixth in two corners. Quartararo dropped to seventh as Espargaro was eighth from Oliveira, Crutchlow, A Espargaro, Dovizioso, Lecuona, Ducati’s Danilo Petrucci and Bradl in Top 15.

As Morbideli led Rins, Zarco came under pressure from Mir and Marquez, as both were able to pass him couple of laps to be third and fourth respectively. The Frenchman did not make it easy on the Honda rider, though, as the duo exchanged places couple of times.

Behind them, Vinales was passed by Espargaro soon as Quartararo had Oliveira, Crutchlow, Dovizioso, A Espargaro and Lecuona all bunched up together on his tail. While they continued to fight, up ahead, Marquez crashed out at Turn 2 from fourth place.

It allowed Zarco back in the Top 4 with Espargaro in fifth ahead of Vinales and Quartararo, who had the whole pack behind him. The Frenchman, though, couldn’t hold Oliveira for long as the Portuguese finally got through him for seventh.

This put Quartararo just ahead of Dovizioso, who managed to clear Crutchlow to get inside the Top 10. The Brit lost to A Espargaro and also Lecuona but they all gained places after multiple slips from the Ducati rider, who fell back to 12th.

At the front, Morbideli continued to lead MotoGP Alcaniz GP as Rins couldn’t eat up much on the Italian, while Mir steadied in third from Zarco and Espargaro. It was another place for Oliveira after he managed to ease past Vinales, with Quartararo just behind.

The Frenchman had A Espargaro on his tail but not for long as the Spaniard was forced to retire due to mechnical issues. This helped Lecuona to ninth ahead of Crutchlow. The fight for 11th saw Dovizioso fend off from Petrucci and Bradl.

He couldn’t hold off Petrucci as he took the place, at the same time, when Espargaro passed Zarco for fourth. The Frenchman tussled with Oliveira, the duo exchanging places couple of times but the Ducati rider staying ahead of the Portuguese.

It was easy up front as Morbideli took his second MotoGP win of 2020 season in Alcaniz GP with Suzuki securing another double podium where Rins was second ahead of Mir – the latter extending his points lead with three races to go.

Espargaro was fourth as Zarco kept fifth on the line from Oliveira. Behind them, Vinales was seventh from Quartararo with Lecuona in ninth and Petrucci rounding out the Top 10 after the Italian managed to pass Crutchlow on the final lap.

The Brit settled for 11th with Bradl in 12th after the German passed a slow runner Dovizioso, whose MotoGP title chances took another hit. The Top 15 was covered by Avintia Ducati’s Tito Rabat and Aprilia’s Bradley Smith.