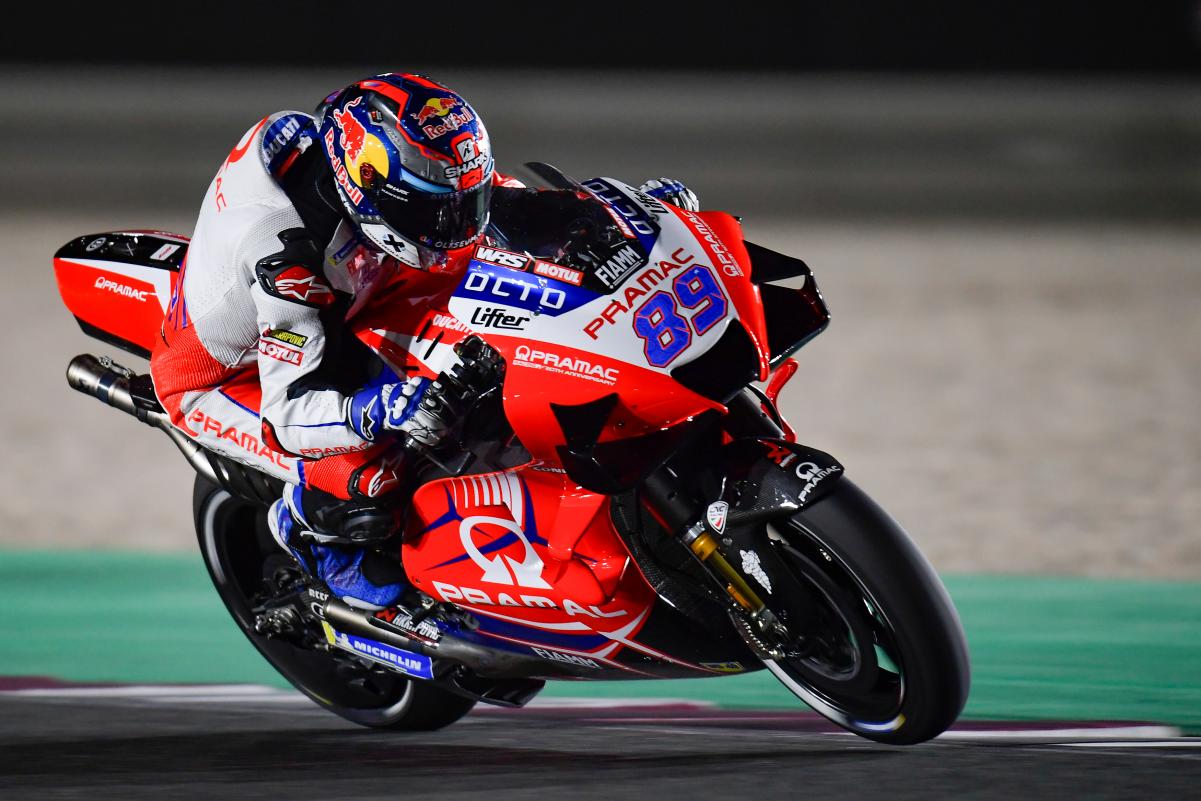 The first part in MotoGP Doha GP saw multiple changes in the Top 2 to make it in Q2. It was led by KTM’s Brad Binder and Suzuki’s Joan Mir initially, before the latter went quickest after the end of the first run. He improved further to set a 1m53.931s to make it in.

There was no challenge against him as the fight for second intensified. Binder stood firmly ahead of Tech 3 KTM’s Danilo Petrucci, Avintia Ducati’s Luca Marini and Petronas SRT Yamaha’s Valentino Rossi, but not for long as the order changes on second run.

Marini went second fastest with Honda’s Pol Espargaro joining the fray in third from LCR Honda’s Alex Marquez. But KTM’s Miguel Oliveira popped in a 1m54.220s out of nowhere to make it in Q2 of MotoGP Doha GP along with Mir, pushing Marini to third by 0.008s.

The Italian will start from 13th from Marquez, who managed to beat Espargaro on his last lap. LCR’s Takaaki Nakagmi slotted in 16th with Petrucci 17th and Binder 18th, while Avintia’s Enea Bastianini ended up 19th after early issues due to sand on track.

Tech 3 KTM’s Iker Lecuona was 20th with Rossi only 21st, ending up nearly one second off Mir, to start from the last row of the grid, as Aprilia’s Lorenzo Savadori rounded out the 22 MotoGP runners.

The second part of MotoGP Doha GP started with the track still having sand off the racing line, which made it tricky for the riders. It was an interesting first run with Pramac Ducati’s Jorge Martin leading the way with a 1m53.597s in dusty conditions.

He was just ahead by 0.017s as Yamaha’s Fabio Quartararo was second from Aprilia’s Aleix Espargaro, with Petronas SRT’s Franco Morbidelli in fourth ahead of Qatar MotoGP pole-sitter, Ducati’s Francesco Bagnaia, while winner Yamaha’s Maverick Vinales was ninth.

The second run had Vinales displace Martin from the top and improved further to a 1m53.267s lap, but Martin had more in store. His teammate Johann Zarco went quickest with a 1m53.263s first, taking on the Spaniard by 0.004s on his last lap.

But Martin upped his pace further to a 1m53.106s to take his first MotoGP pole for Doha GP in a Pramac 1-2, with Vinales dropping to third. A late push from Ducati’s Jack Miller helped him to be fourth, displacing Yamaha’s Fabio Quartararo to fifth.

Bagnaia ended up sixth from Espargaro, as Suzuki’s lead rider was Alex Rins in eighth from teammate Mir, while Morbidelli, Honda’s Stefan Bradl and Oliveira rounded out the Top 12.