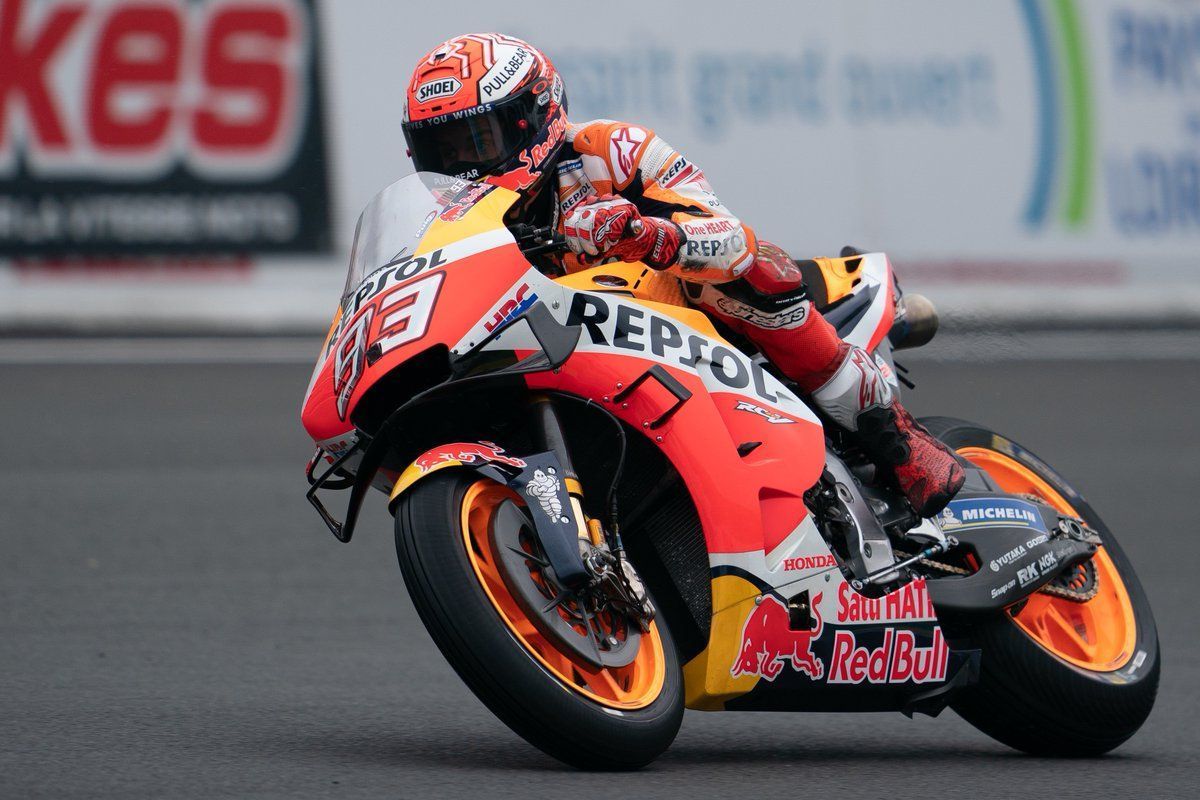 Honda’s Marc Marquez had it easy in the end to score his third win of 2019 MotoGP season in French GP ahead of Ducati’s Andrea Dovizioso and Danilo Petrucci.

There was drama at Le Mans circuit even before the French GP started as Avintia Ducati’s Karel Abraham and Suzuki’s Joan Mir crashed at the ring-hander separately but in the same corner. Both made it to the pits to ride on the second bike.

While Mir could continue but Abraham was shown black flag as he ‘exited the pit lane after the leader crossed the finish line at the end of the first lap’. Meanwhile, the start of the MotoGP race had Honda’s Marc Marquez in the lead from Ducati’s Danilo Petrucci.

At the front though, Marquez led the way as Petrucci ran wide to drop to sixth with his teammate Dovizioso regaining positions to slot himself behind Miller in third. While it looked like things would settle down but Miller had some other ideas.

The Australian went wheel-to-wheel with Marquez and passed him for the French GP lead in Turn 2 but Marquez fought back few laps later to regain it. Miller did not back down though but it wasn’t to be as the Spaniard started to pull away once re-taking the lead.

Marquez then continued his charge but Miller came under pressure from Dovizioso who passed him mid-way in the race for second. Ducati teammate Petrucci, meanwhile, cleared Rossi to take fourth and also caught up on the back of Miller.

The Italian eventually passed him for third with Miller then defending fourth from Rossi as KTM’s Espargaro kept sixth from Morbidelli and LCR Honda’s Cal Crutchlow. The man on charge though was Quartararo, who made his way up to the Top 10 after early off.

The Frenchman was one of the quickest riders towards the end in his chase of Crutchlow. With Quartararo, Suzuki’s Alex Rins also started to make headway to get into the Top 10 which dropped Lorenzo out of it in another average performance.

While Rossi fought well inside the Top 5, his teammate Vinales had a torrid time which eventually ended in a crash when he was taken out by Pramac Ducati’s Francesco Bagnaia. The Italian had a high-side in the left-hander and clouted the back of Vinales.

The fight at the front was neuatralised as Marquez eased into to score his third win of 2019 MotoGP season in French GP with Honda scoring their 300th as the Ducati riders continued to battle each other with Petrucci getting by Dovizioso few times but it wasn’t to be.

Dovizioso kept second in the end with Petrucci scoring his first podium for Ducati. Having fought hard at the start, Miller had to be content with fourth and the independent trophy ahead of Rossi, who nearly passed him at the end with only 0.113s behind.

Behind them was KTM’s Espargaro, who did a fantastic job in sixth, to register his and the team’s best result of 2019 so far. He fended off Morbidelli all the way as Quartararo climbed up to eighth after even managing to take Crutchlow, who was ninth.

It was Miguel Oliveira in 14th with Hafizh Syahrin in 15th as the Malaysian scored his first point of 2019 MotoGP season in a close fight with his teammate as Mir rounded out the 16 finishers in a race which saw seven non-finishers.

Vettel surprised with no contract extension by Ferrari, adds on his future