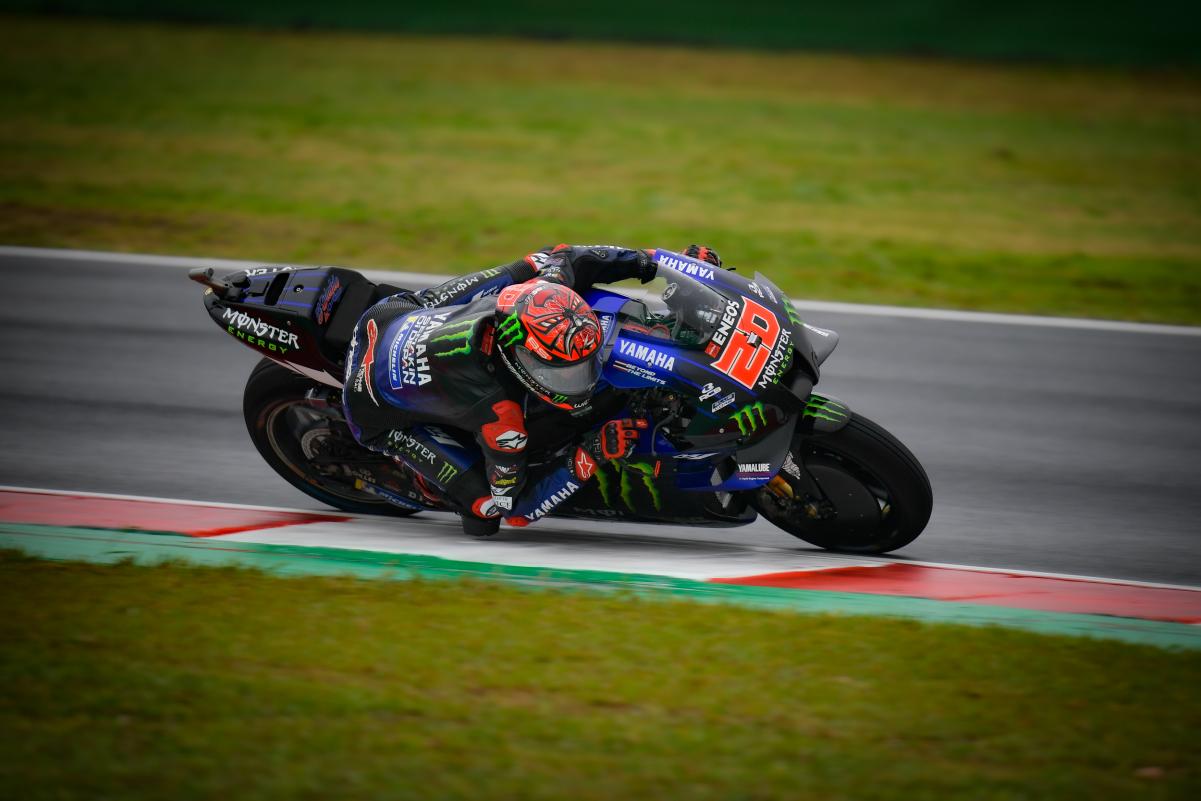 Marc Marquez won Emilia Romagna GP in a Honda 1-2 from Pol Espargaro as Avintia’s Enea Bastianini was P3 with Fabio Quartararo being crowned the 2021 MotoGP champion.

Pole-sitter Francesco Bagnaia had a shaky start in MotoGP Emilia Romagna GP abode his Ducati, but he maintained his lead from Jack Miller, as Honda’s Marc Marquez moved up to third from KTM’s Miguel Oliveira, with Honda’s Pol Espargaro not far behind.

Yamaha’s Franco Morbidelli steadied in sixth as Avintia Ducati’s Luca Marini dropped to seventh after starting from the front row of the grid, from Aprilia’s Aleix Espargaro, Tech 3 KTM’s Iker Lecuona and Suzuki’s Alex Rins in the Top 10.

The weekend for Suzuki’s Joan Mir worsened when he was handed a double long gap penalty for a jump start. Even before he could serve it, the Spaniard crashed out taking Tech 3’s Danilo Petrucci along with him to end both their races.

Moments later, Ducati’s Miller crashed out from second at Turn 15, which allowed Marquez to move on the tail of Bagnaia. His Honda teammate Espargaro cleared Oliveira to be third, as Morbidelli was fifth from A Espargaro, who got through Marini.

Rins was eighth as Yamaha’s Fabio Quartararo climbed up to ninth after dropping to 17th on Lap 1. Pramac Ducati’s Jorge Martin was 10th ahead of teammate Johann Zarco, as KTM’s Brad Binder was already up to 13th after starting from pitlane.

The South African crashed on the sighting lap which forced him to start from the pitlane. He chased Avintia’s Enea Bastianini for 12th, as Ducati’s Michele Pirro and Aprilia’s Maverick Vinales in the points scoring position in the Top 15.

It was getting atrocious at Misano as LCR Honda’s Takaaki Nakagami, Lecuona and Martin all crashed out one after the another. The other LCR of Alex Marquez also stopped on track due to mechanical issue as Binder got Long Gap Penalty for exceeding track limits.

At the front, Bagnaia continued to lead from Marquez, Espargaro, Oliveira and A Espargaro, while Rins defended hard from Quartararo, Marini and Zarco fought for sixth after Morbidelli dropped back to the fag end of the Top 10 as he struggled for fitness.

While the Top 4 steadied, Quartararo fought Espargaro to take fifth dispute resistance from the Aprilia rider. Rins was just behind them in seventh with Bastianini eighth from Zarco and Marini in the Top 10 where Morbidelli dropped further behind.

At the front, Bagnaia started to face the heat from Marquez and disaster struck when the Italian crashed out at Turn 15 to seal the 2021 MotoGP title race in the favour of Quartararo with two races to go. It was a Honda 1-2 with Marquez leading Espargaro.

A fall for Oliveira allowed Quartararo to be third with Bastianini moving up to fourth from Zarco and Rins, as A Espargaro led teammate Vinales in seventh, with Marini in ninth from Binder in the Top 10. Petronas SRT’s Valentino Rossi climbed up to 11th in the process.

Pirro was 12th from Petronas SRT’s Andrea Dovizioso, as Honda ended up 1-2 with Marquez winning the Emilia Romagna GP from Espargaro. It was a dream finish for Bastianini to take third from 2021 MotoGP championship Quartararo on the final lap of the race.

It didn’t matter for Quartararo in fourth from Zarco, Rins, A Espargaro, Vinales, Marini and Rossi in the Top 10. Binder was 11th from Pirro, Dovizioso, Morbidelli and Nakagami, who rejoined the race and scored a point in the Top 15.