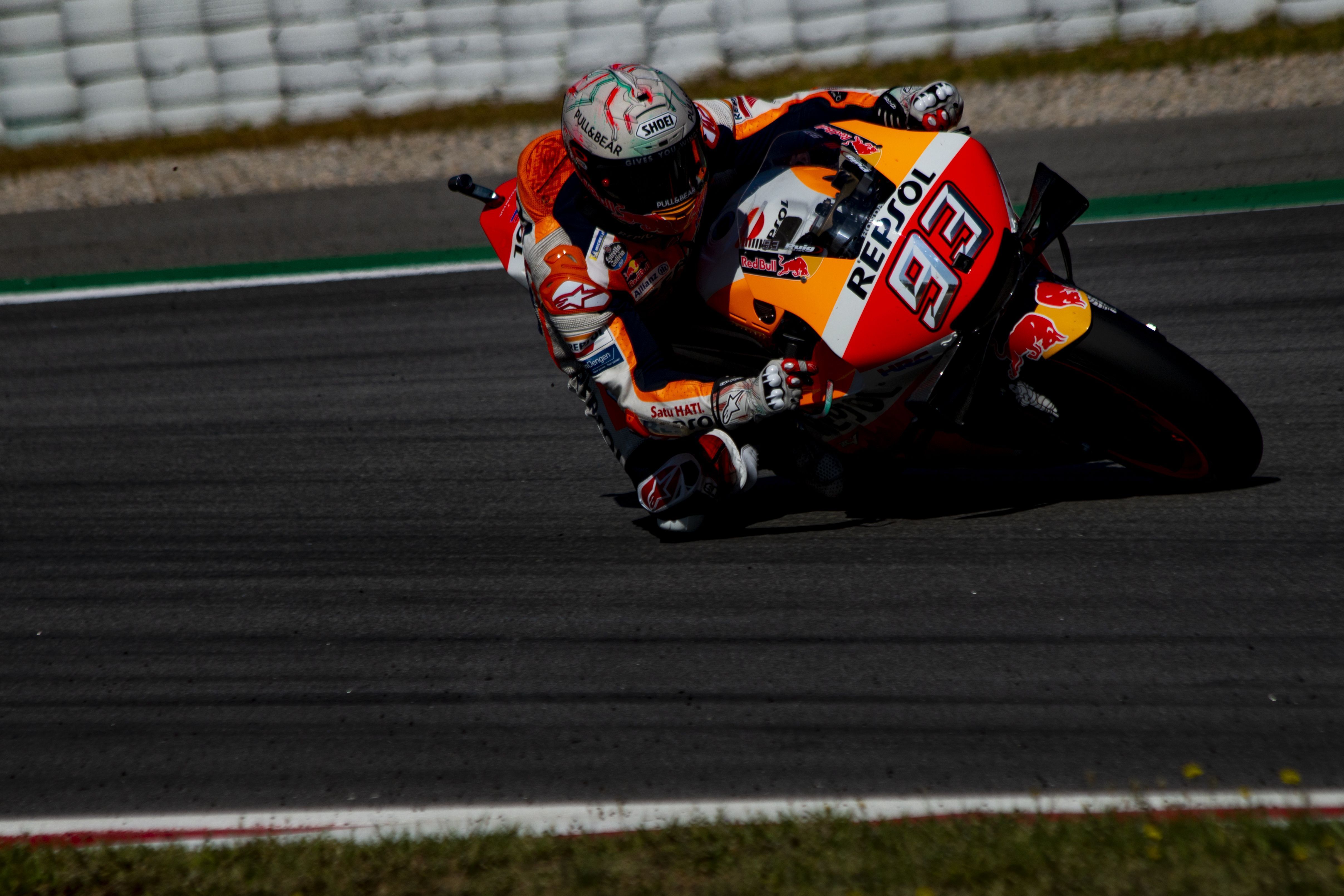 Honda’s Marc Marquez scored the win in Catalan GP after teammate Jorge Lorenzo took out three of his MotoGP rivals at the start of the grand prix.

It was a solid start to MotoGP Catalan GP at Circuit de Catalunya-Barcelona with Ducati’s Andrea Dovizioso slotting into the lead from Honda’s Marc Marquez with Yamaha’s Maverick Vinales, Honda’s Jorge Lorenzo and Yamaha’s Valentino Rossi behind.

Pole-sitter Petronas Yamaha SRT’s Fabio Quartararo dropped down outside the Top 5. Things were far from settled at the front as Dovizioso had Marquez along with Vinales, Lorenzo and Rossi on his tail – all looking to get by the Italian.

The Ducati rider made a mistake in the left-hander at Turn 10 which got Marquez in the game as he sneaked past the Italian. Vinales was looking through as well along with Lorenzo but the Honda rider slipped out as he made the turn.

Unfortunately for him, he lost control and slid down as his front end touched the rear of Dovizioso, who then took Vinales as well as Rossi ran over Lorenzo’s bike and fell down himself. All four riders were immediately out as Marquez took the lead of Catalan GP.

With the four big guns out, Ducati’s Danilo Petrucci moved up to second with Suzuki’s Alex Rins in third after clearing Quartararo. Behind the Top 5, it was Pramac Ducati’s Jack Miller in sixth from 14 on the grid as he headed LCR Honda’s Cal Crutchlow and Suzuki’s Joan Mir.

It was mayhem still as Aprilia’s Aleix Espargaro and Bradley Smith collided with each other at the start with the former crashing into his teammate. The Spaniard made it into the pits but had to be carried over from his bike into the garage with a suspected injury.

The Aprilia duo hindered Tech 3 KTM’s Hafizh Syahrin run as well, who retired later on after retirements for Avintia Ducati’s Karel Abraham and Pramac Ducati’s Francesco Bagnaia in separate incidents. It became a race of survival with two more crashes.

Petronas Yamaha SRT’s Franco Morbidelli and LCR Honda’s Cal Crutchlow both crashed out while battling for positions with the former re-joining the race for few laps but officially retired with only 13 MotoGP riders remaining in the grand prix.

At the front, Marquez continued his charge but Petrucci had to fend off Rins and Quartararo’s charge. The former two went back and forth until Rins ran wide at Turn 1 and nearly crashed, to drop back behind teammate Mir.

As soon as Rins ran wide, Petrucci lost out to Quartararo in the fight for second as Crutchlow’s crash helped Miller in fourth, who had the two Suzuki on his tail. All this did not deter Marquez though to score his fourth MotoGP victory of 2019 in Catalan GP.

The crash for his rivals meant, he has pulled out a big lead. Marc’s victory came after a win for his brother Alex in Moto2 earlier in the day. It was Quartararo in second to score his first MotoGP podium with Petrucci completing the Top 3.

The Suzuki riders got Miller in the end but not both with Rins recovering to fifth ahead of Miller and Mir. Long way off in seventh was KTM’s Pol Espargaro with LCR Honda’s Takaaki Nakagmi in eighth ahead of Avintia Ducati’s Tito Rabat.

The Top 10 was rounded out by KTM’s Johann Zarco, his first of 2019, as Aprilia’s Andrea Iannonen, Tech 3 KTM’s Miguel Oliveira and Suzuki’s Sylvain Guintoli completed the 13 finishers in the Catalan GP.