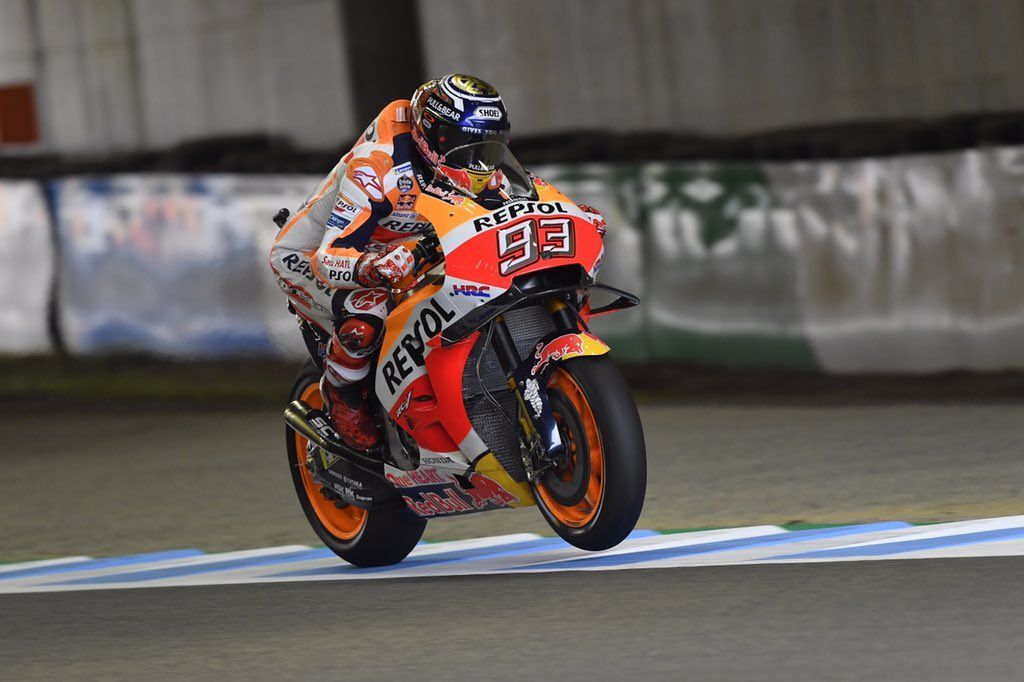 Honda’s Marc Marquez secured the 2018 MotoGP title with a win in the Japanese Grand Prix after a late crash for Ducati’s Andrea Dovizioso at Twin Ring Motegi.

It was a good start from Dovizioso in the lead but absolutely storming one for Marquez who shot up to second from sixth in the opening few corners as Pramac Racing Ducati’s Jack Miller dropped to third.

A close run from Miller at the start put off Tech 3 Yamaha’s Johann Zarco as he dropped to seventh with Yamaha’s Valentino Rossi also gaining places to fifth from ninth. His teammate Maverick Vinales dropped to 10th.

While Dovizioso led Marquez, LCR Honda’s Cal Crutchlow joined the fray after passing Miller. The British rider was close on the tail of Marquez and made the eventual move to grab second but Marquez fought a few laps later to retake the place.

Behind the Top 3, Rossi had the Suzuki pair of Alex Rins and Andrea Iannone to battle with Honda’s Dani Pedrosa fighting with Zarco, Angel Nieto Ducati’s Alvaro Bautista and Vinales. Iannone was on a charge after he made his way up to sixth from ninth.

He passed Pedrosa, Zarco and Rins in the process but the Italian’s run ended midway in the race when he crashed out in Turn 10. Just before Iannone’s crash, Miller and Angel Nieto Ducati’s Karel Abraham also had a tumble to retire.

The fight for the lead intensified with Dovizioso trying all to fend off Marquez and Crutchlow. With 11 laps remaining, Marquez made the move to pass Dovizioso but on the exit of the corner, Marquez ran slightly wide on the dirt.

This unsettled Dovizioso as well bringing in Crutchlow in the fray but the Italian had enough to retake the lead. It soon became a fight between Dovizioso and Marquez as Crutchlow faded away to fall in the clutches of Rins who managed to re-pass Rossi.

The title battle took a decisive turn when the Spaniard re-took the lead in the end stages and in the chase to get back on the Spaniard, Dovizioso slipped in Turn 10 with two laps remaining which sealed the championship for Marquez.

Not only did Marquez win the race but also his fifth MotoGP title with three races to spare in an absolute dominance in 2018. It is seventh world championship win. The Spaniard used the famed Japanese arcade game to celebrate his title victory.

With Dovizioso’s crash, it was Crutchlow in second as he fended off Rins until the chequered flag with the Spaniard completing the podium. Rossi ended up fourth which made it an all-Japanese manufacturer in Top 4.

After a slow start for Bautista, the Spaniard once again mastered with late race pace to finish fifth after clearing Pedrosa and Zarco and being helped by the crashes for Miller, Iannone and Dovizioso.

Zarco eventually finished sixth with Vinales improving late in the race to seventh. The Spaniard ran at the bottom of the Top 10 for the majority of the race before making some progress towards the end.

Pedrosa was eighth with Pramac Racing Ducati’s Danilo Petrucci in ninth as Tech 3 Yamaha’s Hafizh Syahrin recorded his first-ever Top 10 result in MotoGP. The Malaysian had to fend of three of his rivals though.

Marc VDS Honda’s Franco Morbidelli was close behind in 11th with KTM’s Bradley Smith and Pol Espargaro in 12th and 13th respectively – the latter scoring his first points since returning from injury.