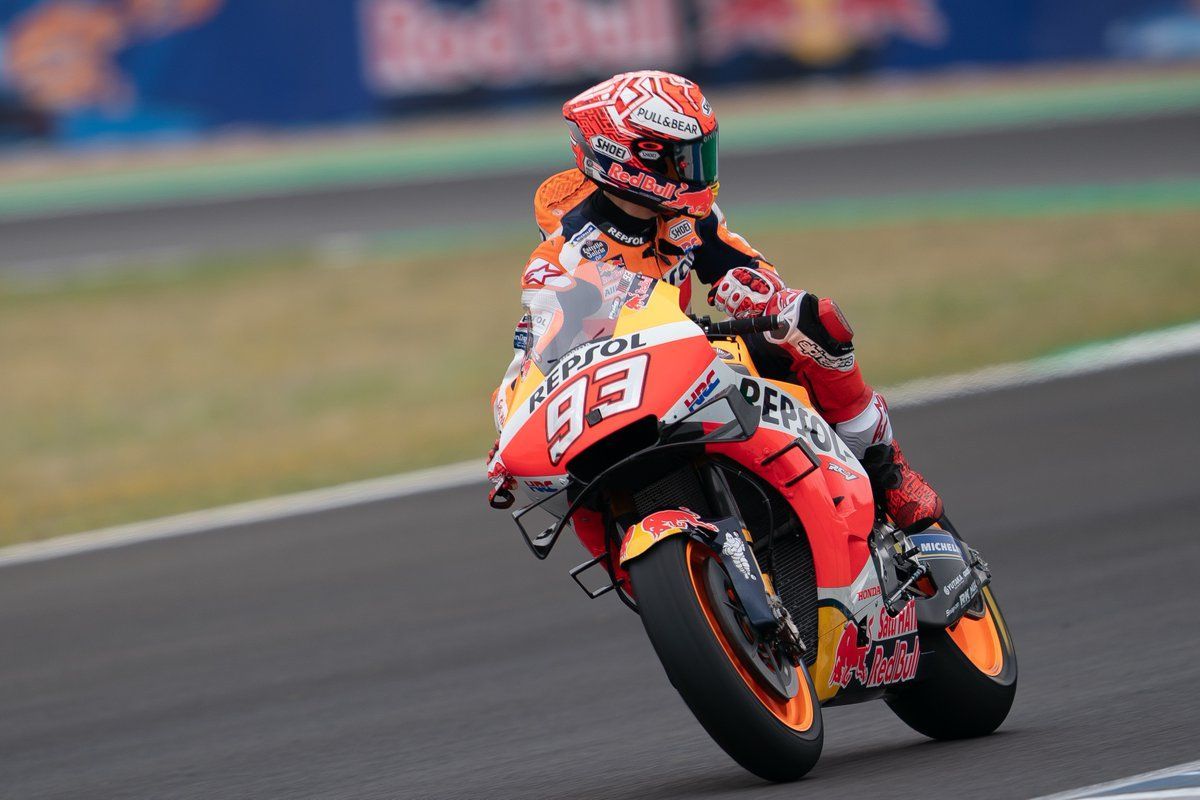 Honda’s Marc Marquez was untouchable once in the lead as he took victory in MotoGP Spanish GP at Jerez from Suzuki’s Alex Rins and Yamaha’s Maverick Vinales.

It was a super start from Honda’s Marc Marquez as with a holeshot, the Spaniard took the lead of MotoGP Spanish GP at Jerez to be ahead of Petronas Yamaha SRT riders with Franco Morbidelli clearing teammate and pole-sitter Fabio Quartararo.

Ducati’s Andrea Dovizioso also made a good start but couldn’t hang on as he dropped to fifth behind Yamaha’s Maverick Vinales. Behind, Suzuki’s Alex Rins was up on the rise as he moved up to sixth already in the opening few laps, cashing Dovizioso.

At the same time, Yamaha’s Valentino Rossi had a decent start to be 10th but Honda’s Jorge Lorenzo had a disaster as the Spaniard dropped to 15th. Another bad starter, Pramac Ducati’s Francesco Bagania eventually crashed out in Turn 2 after dropping to 17th.

At the front though, Marquez started to pull away from the three Yamaha riders as Rins got the better of Dovizioso to take fifth. The Spaniard gained further as he passed Vinales for fourth as disaster struck Quartararo after he passed Morbidelli for second.

The Frenchman slowed down to retire in the pits as replays showed he couldn’t change gears after being stuck in third. The retirement changed the standings as Rins moved into second with Vinales in third after both managed to pass Morbidelli.

The Italian further to places with Dovizioso moving to fourth and Danilo Petrucci to sixth. As one Italian lost places, the other in the form of Rossi, started to gain in as he moved up to sixth after clearing LCR Honda’s Cal Crutchlow and Pramac Ducati’s Jack Miller.

At the front though, Marquez was unrelenting as he made up slightly for the loss of Austin with a dominant show at Jerez to win the Spanish GP and re-take the MotoGP points lead. At the same time, Rins followed up from his win to finish a solid second.

The final place on the podium saw a gritty fight between Vinales and Dovizioso until the chequered flag with the Spaniard managing to hold off the Italian to score his first MotoGP podium since 2018 Australian GP – he also sealed an all-Spanish podium.

Title contender Dovizioso eked out fourth to score handy points as he led Ducati teammate Petrucci in the Top 5. After the showing from Yamaha’s satellite team on Saturday, the factory team did well on Sunday with Rossi fighting his way to sixth.

It was Morbidelli in seventh eventually after the Italian passed Crutchlow on the final lap with the Brit’s LCR Honda’s teammate Takaaki Nakagami in ninth ahead of Honda tester Stefan Bradl with Aprilia’s Aleix Esparagro in 11th despite a late tangle.

He collided with Miller in the final corner where the Australian crashed out in the left-hander. Espargaro ran slightly wide and as he tried to come back in, he did not see Miller, who tried to take an inside line when he crashed as Espargaro continued on.

While his teammate took the win, Lorenzo could only manage 12th. The Spaniard was 15th for most part of the grand prix but two retirements helped him gain places. He led the KTM duo of Pol Espargaro and Johann Zarco in 13th and 14th respectively.