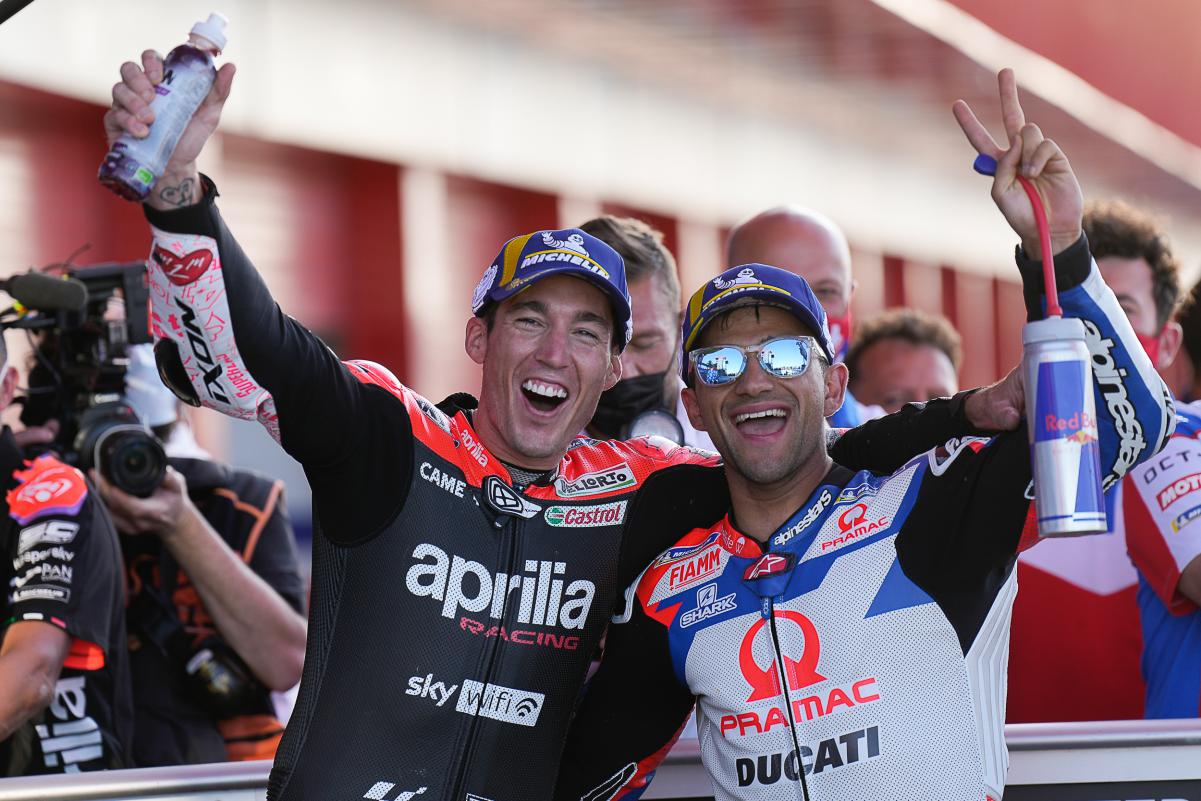 Aleix Espargaro fought back to pass Jorge Martin to win his and Aprilia’s first MotoGP race in Argentina GP, with Alex Rins in third.

It was a solid start from Jorge Martin on his Pramac Ducati in Argentina GP to lead the MotoGP race from pole-sitter Aprilia’s Aleix Espargaro with VR46 Ducati’s Luca Marini retaining third from Honda’s Pol Espargaro and Suzuki’s Alex Rins in the Top 5.

As Martin and Espargaro started to trade fast times, Quartararo dipped out of the Top 10 to be 13th as satellite RNF Yamaha rider Andrea Dovizioso pitted with an issue. He joined the track later on but was too far off for any points chance.

With Martin leading Espargaro, Marini came under pressure from P Espargaro and Rins. Both managed to clear him for third and fourth, as the Suzuki rider managed to clear the Honda rider for third in the subsequent laps. Marini, meanwhile, started to drop.

He fell behind Mir and Vinales at one point but had a hefty back and forth fight with the Aprilia rider. This allowed the Suzuki rider to be fifth in the order as Bagnaia climbed himself up from out of the Top 10 to inside it in a decent show.

The Italian was eighth behind the pack after he cleared Binder, with Bastianini in the Top 10. Quartararo was up to 11th after a crash for Pramac’s Johann Zarco and Nakagami losing ground after a good start. The Japanese rider was 12th by halfway mark.

KTM’s Miguel Oliveira was behind him in 13th from Ducati’s Jack Miller and VR6’s Marco Bezzecchi, who started to pile the pressure on the Australian. It wasn’t looking the weekend for Yamaha as Franco Morbidelli retired with a problem.

Their Japanese rivals Honda faced equal misery after the crash for Esparagro from fourth. It helped Suzuki as Rins settled in third from teammate Miro with Vinales fifth from Bagnaia who managed to clear Marini along with Binder to be sixth and seventh.

He almost lost out to Bastianini but for a wide moment at Turn 1 which dropped him to 13th. Marini retained eighth from Quartararo with Nakagami in 10th from Bezzecchi who climbed up to 11th, with Oliveira in 12th ahead of Bastianini.

At the front, Espargaro started to pressure Martin and he had the move done on the right-hander but for the Aprilia rider to go wide and allow the Pramac man to retake the Argentina MotoGP lead. But the two stayed together still from the Suzuki pair.

Espargaro tried the move again at Turn 1 but went wide again. However, with five laps remaining, the Aprilia rider finally got through the Pramac man maintain the Argentina MotoGP lead. It was too close between the two until the end.

But Espargaro held on to register his and Aprilia’s first MotoGP win in Argentina GP in a historic moment, as Martin and Rins rounded out the podium. Teammate Mir was fourth as Bagnaia climbed up to fifth after a tough qualifying session.

Binder came through in sixth after a late move in Vinales, with Quartararo salvaging eighth from career-best for Bezzecchi in eighth who managed to pass teammate Marini. He dropped to 11th after Bastianini climbed back up to 10th after the wide moment.

Nakagami was 12th from Oliveira, Miller and LCR’s Alex Marquez in the Top 15 to score points, with Tech 3 KTM pair missing out where Raul Fernandez was 16th from Remy Gardner. RNF’s Darryn Binder was 18th from Honda’s Stefan Bradl and Dovizioso.