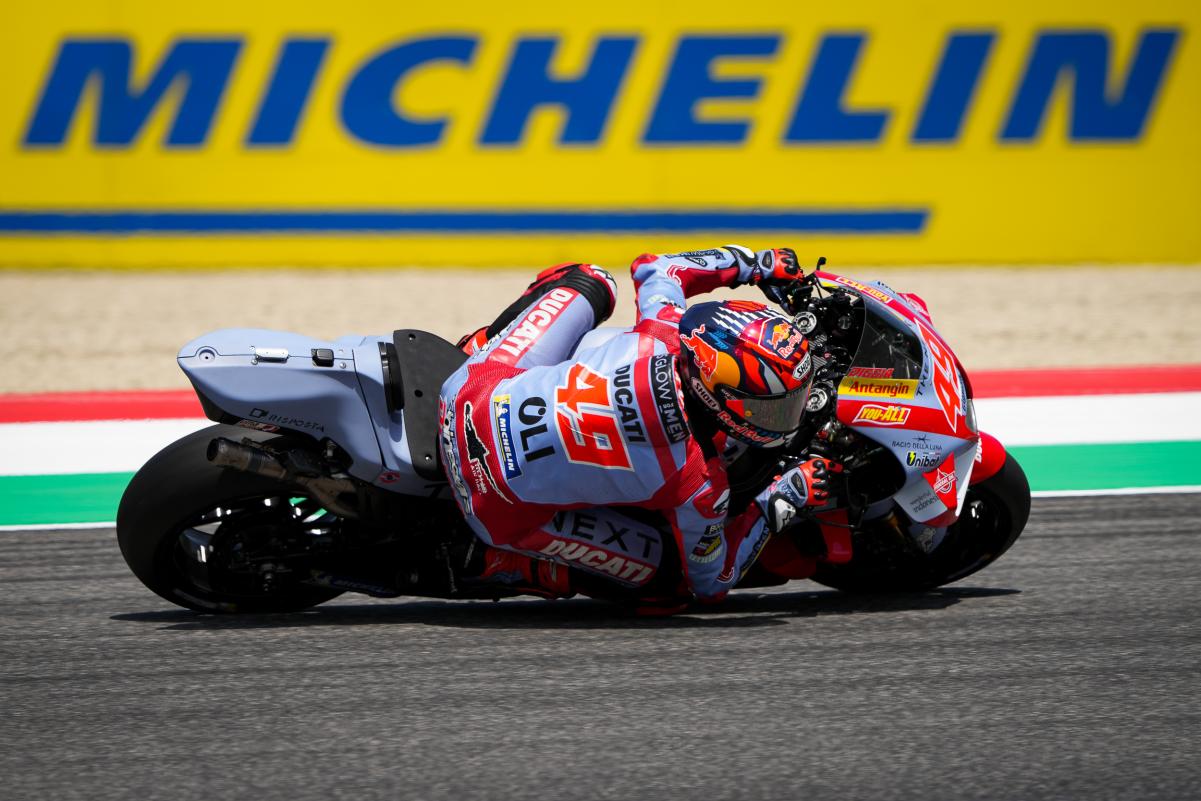 It was greasy conditions to start the first part in MotoGP Italian GP where the whole field went for the wet weather tyres apart from KTM’s Brad Binder. His teammate Miguel Oliveira provisionally led the way from Ducati’s Jack Miller and Yamaha’s Franco Morbidelli.

But Binder’s dry tyre strategy helped him to shot up to the top from teammate Oliveira, as despite few spots of rain the field switched to the slick tyres for their last attempt. But rain started to fall heavy at certain parts of the circuit to hurt others.

Despite the conditions, the lap times started to tumble with several riders continuing to improve. Gresini Ducati’s Fabio di Giannantonio ended up fastest with a 1m47.219s lap with Honda’s Marc Marquez making it through to Q2 with a 1m47.294s lap.

Interestingly, they both were behind Miller on the track and both made it through with the Australian only third to start Italian MotoGP from 13th. Ducati wildcard entrant Michele Pirro was 14th with KTM pair of Oliveira and Binder in 15th and 16th.

The start of second part in MotoGP Italian GP qualifying was red-flagged after a massive highside for Honda’s Marquez at Turn 2. As soon he came along at the left-hander along with the other riders, he lost control and had a large fall.

His bike caught fire as he rushed back into the pits with the marshals doing the cleaning job under red flag. Despite the greasy conditions, the riders were on the slick tyres for their run after the red flag stoppage, with Marquez also back on the spare bike.

But he dived back into the pits to save tyres. Meanwhile, the times started to come in with Gresini’s di Giannantonio leading the way from VR46 Ducati’s Marco Bezzecchi and LCR’s Takaaki Nakagami provisionally with about six minutes to go.

Pramac Ducati’s Johann Zarco went fastest with about two minutes remaining in a special livery as times started tumble after that. The order changed and shocked everyone when the chequered flag fell with di Giannantonio taking his first MotoGP pole in Italian GP.

He set a 1m46.156s lap on the final attempt to go fastest where he led the VR46 pair of Bezzecchi and Luca Marini to make it a surprise Top 3. Zarco dropped to fourth with Ducati’s Francesco Bagnaia in fifth to make it Ducati 1-2-3-4-5.

What a day it is for the Italian's at home! 🇮🇹

Big congrats to @FabioDiggia49 on his maiden #MotoGP pole ahead of @Marco12_B and @Luca_Marini_97 locking out the front row! 👏#ItalianGP 🇮🇹 pic.twitter.com/JGoyVmyWWO